PREMISE | Acclaimed reporter Ozzie Graham (The Daily Show‘s Wyatt Cenac) relocates to a small town in upstate New York, where he intends to profile the members of StarCrossed, a support group for people who believe they’ve experienced alien encounters. And no one is more surprised than Ozzie when the group — filled with quirky outliers, played by the likes of Ana Gasteyer (Suburgatory) and Brian Huskey (Children’s Hospital) — helps him remember his own abduction. Oh, and did I mention that a trio of menacing-yet-endearing extraterrestrials is monitoring the humans’ every move, all the while crafting ill-conceived plots of their own? There’s a lot going on, and it’s all wonderful. 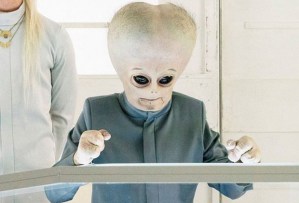 WORTH YOUR TIME IF YOU ENJOY… | Ensemble comedies with offbeat characters, awkward humor and an unexpected amount of heart. People of Earth offers all three in spades, as it seamlessly bounces between one-on-one interviews with Ozzie, outrageous StarCrossed group meetings, and sporadic “workplace” scenarios with the aliens. (Side note: Those aliens, particularly the big-eyed and even bigger-headed Jeff [pictured here], could effortlessly carry their own spinoff. I promise you’ll grow to love them in no time.)

YOU SHOULD PROBABLY ALSO KNOW… | This show is as likely to make you laugh as it is to make you squirm. Certain alien scenes — particularly those related to Ozzie’s muddled past — are downright chilling. But like the talking deer in Ozzie’s visions keeps reminding him, “Don’t get weird.” Just go with it, and you’ll soon find yourself desensitized to the creepiness.

IS IT COMING BACK? | You know it! Though a premiere date for Season 2 has yet to be announced, the series was officially renewed — along with fellow freshman comedy Search Party — in December.

WHERE CAN I WATCH IT? | Select episodes (four or five at any given time) are available to stream on TBS’ site and On Demand. The entire season is available for purchase on iTunes.

Press PLAY on the video below for a taste of what People of Earth is all about, then hit the comments: Will you check in with the show?