There’s no need for a spoiler alert when talking about Caroline Dhavernas‘ new series. Her character’s big secret is right there in the title: Mary Kills People.

But unlike the protagonist of Dhavernas’ former series, Hannibal, the lead in Lifetime’s new drama ends lives for mercy — not art (or dinner).

Mary is a medical doctor who, unbeknownst to her family, provides suicide assistance to the terminally ill on the side. Season 1 already aired in Dhavernas’ native Canada, a country that recently voted to legalize the practice.

“I thought the subject matter was really important and interesting, and I think it’s a social debate we should have more often,” the actress tells TVLine. Passage of the law “was a bit of a coincidence, because Tara Armstrong, our writer, wrote it this way before the law was changed.”

TVLINE | The show strikes a darkly funny tone right from the beginning — did the way the subject matter is handled affect your decision to sign onto the series?
I wanted to be part of it because it had a great strong female character who’s filled with contradictions and gray zones, and for an actress, it’s always so fun to play. There’s comedy and drama and elements of a thriller, and you’re right, the tone was very different, I guess, than a lot of what you see on TV, especially for that kind of subject matter. It could have been a very tough and depressing one, but I think that they found the way to make it how it is in real life, like a funeral — how alive it makes you feel sometimes to go to a funeral and remember that life is short, that you’re healthy, that it’s good to be alive and to celebrate that… There’s comedy in the deepest drama, and thank God. [Laughs] 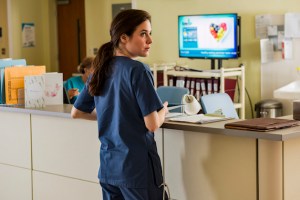 TVLINE | Mary seems very sure of her work in the premiere. In the first season, does she stay as sure of herself? Is she challenged about what she believes?
Yes, of course, because some patients are terminally ill, others aren’t, and where do you draw that line of who can be helped, who can be killed? It’s a lot of pressure for one person to decide if they can help or not. And of course she wants to respect her patients’ point of view and her patients’ decisions. It’s a big, big decision.

And of course yeah, people around her also have different views on what she’s doing. She’s doing all this illegally, and as you can suspect, she will be getting in trouble for that. She has two daughters, and it’s a lot to tackle at the same time.

TVLINE | What can you tease about how Mary’s work affects her kids and her relationship with her ex-husband over the first season’s six episodes?
It affects every aspect of her life, her love life, her family life. Her kids are at these important stages in their lives, especially her teenager, who’s going through a lot, who’s exploring and discovering her own sexuality, and [Mary] would love to be there more for her daughter and be able to have a completely honest relationship. But because of the nature of what she’s doing, she can’t really do that.

TVLINE | You mention her love life, which we see a brief glimpse of with the Joel character — whom she meets when he inquires about her services — in the premiere. What can you tell us about their relationship?
It’s a bit of a poor judgement on her part to be involved with a patient, but at the same time they really get each other. He has this dark sense of humor about what he’s going through that she really understands and gets, and you understand [as you go] through the episodes why she’s doing this, too. Because she had some personal reasons. Something has happened in her past that enabled her to understand, more than anyone, why someone should have the right to make that choice in their life.

This becomes like a drug a little bit… it brings her something, it soothes her somehow. She’s not only doing this out of empathy, there’s another reason underneath as well.