When The Flash resumes Season 3 this Tuesday (The CW, 8/7c), Barry Allen will take a trip into the future to make sense of a disheartening bombshell dropped in the present.

Because in dealing with the time-travelling, Earth-hopping villain Abra Kadabra, Barry learned that Savitar will indeed be Iris’ — and in turn his own — undoing. And yet the magic man never did let slip the sinister speedster’s identity. As a result, and increasingly desperate to find a way to avert Iris’ death at Savitar’s pointy hands, Barry travels to 2024, hoping to find answers. What he finds first, though, is his future self, still shell-shocked by Iris’ tragic, brutal death.

“You see this older version of Barry Allen that hasn’t really ever gotten over the death of Iris West,” Candice Patton shared during our recent visit to the superhero series’ set. 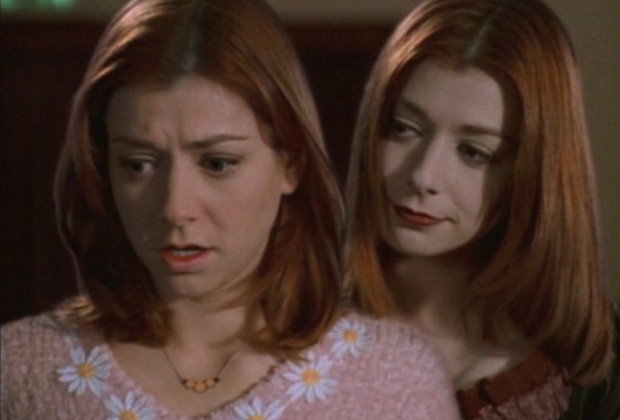 The Barry of the future “is a guy who has lost everything,” Grant Gustin told TVLine while standing adjacent to the Flash’s time tunnel set, which for this episode was made to look dusty, desolate and in disrepair. With a nod to that mess, “Barry looks pretty similar — he is in shambles,” Gustin said. “He does not look good.”

Devastated by losing the love of his life, this Barry is “totally alone” until his past self arrives, setting the stage for double the Gustin. “It’s a lot of scenes with Barry and Barry, and they’re pretty emotional scenes from both sides,” says the actor.

For Gustin — who briefly played opposite himself during the series’ first visit to Earth-Two — tackling an older Barry wasn’t quite the same as when Stephen Amell from sister series Arrow played a much older, grumpier (and pudgier) Oliver Queen on Legends of Tomorrow. Future Barry is “about eight years older, which in a way made it more challenging for me, because it wasn’t like, ‘This is my grizzled, older self,’” he noted. All told, “They were some of the more challenging scenes I’ve done — if not just this year, in the whole series, because I’m my own scene partner.” 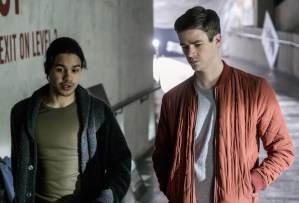 to work opposite other cast members in the 2024 scenes, as Barry “meets up with the older version of Cisco (Carlos Valdes), who kind of leads him through the future to see kind of where everybody’s at.” And understandably, Barry’s was not the only life rattled by Iris’ murder. One need look no further than the stills of the intrepid reporter’s father Joe (Jesse L. Martin), at her future gravesite, to feel the weight of a father’s loss. Said Patton, “Everyone is changed because of it.”