Who will save Supergirl‘s sister? How will NCIS: Los Angeles be forever changed? What does a Criminal Minds return mean? “Hilarious” times ahead for The Flash? Read on for answers to those questions plus teases from other shows.

What can you share about Supergirl, more specifically Season 2, Episode 19? Anything you can give away about Alex/Maggie/Kara ? —Lisa
As revealed in the synopsis for the episode “Alex” (airing May 1), the titular DEO badass is kidnapped, leading Kara and Maggie to find her — if, that is, they can agree on how to go about doing that. “They both have such strong feelings for Alex, and they’re both strong opinionated women who really are passionate about their work,” Floriana Lima shared with me between takes of filming the episode. “So they’re going to butt heads a little bit.” Adds Melissa Benoist: “They don’t necessarily agree on how to deal with the fact that the person that’s the most important to both of them is missing and in danger.”

I am freaking out about the fact that Joe Mantegna’s daughter (Gia Mantegna) is reprising her Season 3 Criminal Minds role (in the episode “3rd Life”) in Episode 20 (airing Wednesday, April 26). Any info about her? Also, can we say that, after Reid’s remembrance of the Mexico murder, Mr. Scratch has nothing to do with that? — Patrícia
So this is interesting — when I asked showrunner Erica Messer about Mantegna’s daughter, she was caught a bit off guard, saying, “That’s a bit of a spoiler.” And then she got totally tight-lipped. As for your second question, Messer said, “No, I would not rule Scratch out.” In fact, he promises to remain a factor until “the last frames of the finale.” 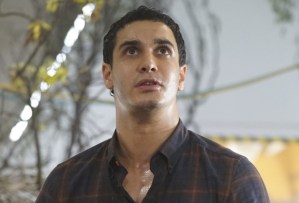 have suffered for three seasons now! Will they finally get together before the season ends?! — Joanna
Although Scorpion EP Nick Santora promises that the Walter/Paige dynamic will “hit an apex” in the season’s final three episodes, this week’s installment will drive a wedge between them first. Teases EP Nick Wootton, “It’s revealed to Walter what happened in Episode 3, which is that he said he loved her, and she said it back” — and Walter’s initial reaction will have very negative ramifications for Paige. “This has been a secret that has been kept throughout the entire season,” Wootton tells us. “It is emotionally very complicated for Walter. Paige has known what he hasn’t known all along.”

Some people are worried about The Flash’s WestAllen with regards to who Savitar could be. Do you know what effect the reveal will have on their relationship? —Arlena
This much showrunner Andrew Kreisberg can offer you: Newly engaged Barry and Iris “are rock solid again” as “the quest to figure out who Savitar is and stop him from killing Iris becomes pretty much the main focus of the rest of the season.” And as those final five episodes unfold, there are twists both “scary and dramatic” as well as, hmm, “hilarious,” the EP says. “We’re really excited about the end of the year.”

I missed Season 1 of Animal Kingdom. Are there going to be repeats of it on TNT? —Angela
Leading up to the drama’s Tuesday, May 30 return date, TNT will marathon its freshman run in two batches, on Friday, May 26 (from 11 pm to 4 am) and Saturday, May 27 (noon to 5 pm). 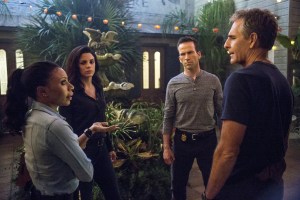 Any scoop on NCIS: New Orleans’ Percy and LaSalle? —Semaj
Their relationship, both personal and professional, will be tested in an upcoming episode when Percy makes a judgment call on a case that defies Pride and comes with serious consequences.

I was surprised that Supernatural’s Dean caved so easily to working with the British Men of Letters. Is he now all in like the other Winchesters or will Dean continue to push back against the Brits’ way of hunting? —Lisa
We’ve helpfully updated your question: Considering what the Brits are up to now, with the spying and killing, is Dean going to be feeling pretty vindicated about his initial hesitations? “‘Vindicated’ might be the wrong word,” executive producer Andrew Dabb says, explaining that “there’s some of that, but I don’t think there’s so much that it will be off-putting. Dean went into [the partnership with the British Men of Letters] with his eyes open, and Sam and Mary probably bought the hype a little bit more. Dean’s more of a skeptic. Sam has always been a little bit more a believer, and Mary’s the same way. They both want to make a better world, a monster-free world. The Brits are making progress doing that. So what it comes down to, finally, is the price you’re willing to pay — and once the rubber hits the road, that price is probably too high for our guys.”

Do you have any info about Andy returning to Modern Family? Please say you do and please say the answer is yes!! —Susan
Yes, I do have info! And the answer is no. Not this season, at least. 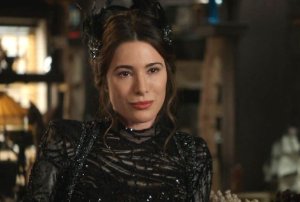 any Once Upon a Time scoop on The Black Fairy? —Maggie
The dark doyenne’s eponymous episode, airing Sunday, April 30, will fill in some blanks on her nefarious past — including why she gave up her son, and why she never named him.

How will the Black Fairy’s presence Storybrooke shape how Rumple and Belle plan to save Gideon? —Ashley
“It certainly complicates things, because of what their son has become and what he’s doing,” series co-creator Eddy Kitsis said when I hand-delivered your Q. “But Rumple and Belle are also loving parents who want the best for Gideon. So they’re trapped in a difficult situation that they’re going to be spending some time trying to extricate themselves from.”

Do you have anything on Prison Break? Specifically about the end of last week’s episode? Does Michael have a plan, or is he really in cahoots with the leader of ISIL? —Jen
I gotta be honest, this week’s episode will keep you (as well as increasingly anxious cellmate Whip) guessing as to Michael’s intentions with regard to Abu Ramal. Worse, his ultimate decision about whether or not to bust out the notorious terrorist could make or break his escape plan.

Any scoop on Burzek from Chicago P.D.? —Victoria
With Burgess — and her very preggers portrayer Marina Squerciati — taking a leave of absence from the unit, there probably won’t be much action on that front this season. “I don’t think the Ruzek relationship is really ready to blossom quite yet,” Squerciati says. “They’re still figuring each other out and figuring out how to work together.” Plus, with Burgess’ new responsibilities at home, taking care of her sister and niece, “I don’t think she’s really thinking about relationships at all right now, unfortunately,” Squerciati adds. As for that deleted “Burzek” scene from the last episode, the actress tells us it featured the exes taking Zoe to school in the morning (and you can now watch it here).

Any word on when the new season of Stitchers will start up? —Tim G.
As reported here (along with other Freeform dates), Stitchers Season 3 premieres Monday, June 5 at 9/8c. 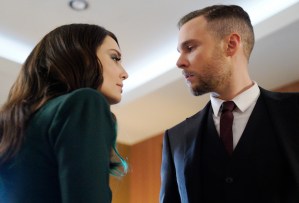 new Agents of S.H.I.E.L.D. episode. Is there any hope for a Fitz redemption? Or he is already gone? —Lee Lee
It sure doesn’t look good, especially since neither Radcliffe’s appeal to spare Agnes nor Jemma’s heart-wrenching “Noooooo!” seemed to shake Fitz out of his Framework stupor. As Brett Dalton observed to me, among all the familiar faces in strange Framework places, Fitz represents “probably the biggest shift. Somebody who through and through was a good, solid, dependable trustworthy guy all of a sudden has become this force to be reckoned with.”

Anything on my new favorite, Riverdale? —Jeff
Mama Andrews’ past with another Riverdale parent will soon be revealed. “You get to see Alice Cooper and Mary Andrews meet up,” star Mädchen Amick previews. “There’s a little [about] what they went through in high school, as well. They definitely knew each other. They had some issues back in the day.” Speaking of old times, Amick says exec producer Roberto Aguirre-Sacasa “definitely has some really fun flashbacks planned for next season,” featuring younger versions of the parental units.

Do you know the date for Scandal finale? Seems silly, but I am scheduling a dinner with my boss and need to know when Season 6 ends…. —Maria
ABC hasn’t yet announced anything, but one may get a hint by looking at the eight and 18th words of this sentence.

Real questions, real answers! If you need the Inside Line on a favorite show, email InsideLine@tvline.com! (With reporting by Vlada Gelman and Rebecca Iannucci)