Caleb wears a sombrero for a good part of his return in this week’s Quantico, and really, did you expect anything different?

The prodigal Haas brother re-enters the action after a call and several (unanswered) texts from Shelby, who’s worried that Clay has lost his way and is thinking about shutting down the slow-to-deliver taskforce.

By the end of the hour, it’s clear that Caleb will be around for at least another week. (Of course, TVLine readers knew that a while back.) Is the blond-on-blond magic still there? Or has Shelby moved on to another Haas man? Oh, and what about that small matter of subverting a group trying for complete American domination? Read on as we review the highlights of “KUMONK.”

CLEVELAND ROCKS! | Clay is frustrated. He is despondent about catching the bad guys. His hair is slightly askew. Translation: Things aren’t great, people! He goes as far as to tell the team that they’ve “lost the game,” and he indicates that he’s going to advise his mom to end the taskforce ASAP. But Alex isn’t hearing it: She rallies everyone to think about the five cities related to recent pings on the intel and urges the gang to use intuition — not logic — to figure out next steps

And that’s how we soon end up in Cleveland, a city that’s a powder keg thanks to a controversial court case involving home invasion, rape, two deaths (one of them in self-defense) and illegal use/ownership of a handgun. Alex, Shelby and Raina — who’s posing as her twin sister — travel as part of the FBI’s call for agents to keep the calm… yet the moment that Special Agent in Charge Miranda (!) sees them, she knows they’ve got an ulterior agenda. Oh, and she totally outs Raina as posing as Nimah, which SHOCKS Shelby and Alex. (Side note: Worst. Intelligence. Operatives. Ever.) 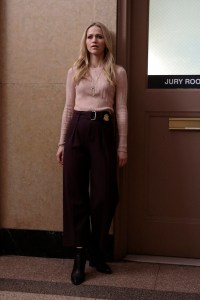 AND MAYBE RIOTS! | Back in D.C., Clay meets with Speaker of the House Henry Roarke, who hints that he wouldn’t mind an American oligarchy — and that if Clay came to work for him, they could forge that path together. So when the case in Cleveland comes back guilty on all counts, thanks to collaborator pressure on the judge (it’s a whole thing involving a legal move known as an Allen charge), the city is poised for riot: The gun used by the homeowner defending his family is illegal thanks to an executive order passed with Claire Haas’ support… making her look terrible.

So Roarke swoops in to speak to the masses and be the leader they’re seeking — only Clay is a step ahead of him and gets Claire to Ohio to address an angry crowd in front of the courthouse. When she admits that she made a mistake and is working to fix it, then warns against any politician who says he or she will make the hard decisions for the citizenry, she undercuts Mr. Speaker and wins the day.

Back in the nation’s capital, a fuming Roarke angrily tasks his assistant with figuring out what Clay is up to.\

SPARKS AND FLAMES | Ryan and Sasha bug each other (like, with electronics, not with leaving the toilet seat up and such). They also kiss a lot. And while the taskforce unlocks the names of the eight collaborators — Thomas Roth, Christian Kelly, Henry Roarke, Rebecca Sherman, Alice Winter, Peter Theo, Maxwell Fletcher and Warren Shepherd — Sasha’s investigative skills bring her to a similar conclusion. So she calls Theo under the guise of fact-checking a Journal story, but he quickly realizes that she’s digging where she’s not authorized, and he hangs up after making a subtle threat.

Later, when she runs into Ryan and asks him to wait for her while she “runs down a lead,” you kind of know where it’s all going: She gets into her car, and it blows up. (I know it’s soon and all, but, um, anyone got dibs on her office?)

HELLO AGAIN | Sebastian breaks into The Farm in full ninja gear but is eventually unmasked by Owen. He reveals that he, too, has been working to find out who’s behind the rogue CIA group, and that he let Harry go when he had him at gunpoint. (Phew!) In fact, Sebastian helps his old classmates out by revealing the identity of at least one of the collaborators.

GUESS WHO’S NOT WELCOME AT DINNER? | So here’s what you really want to know: When Clay visits Claire earlier in the episode, Caleb is at the White House, sporting the aforementioned headwear and the latest from The Dude Abides’ spring line. He mocks his brother for being so flustered and fatalistic about the taskforce’s work, then spouts off about how the group can’t be practical while dealing with terrorists working inside the CIA. “You know what’s not practical? A group of rich, white men trying to topple democracy,” he says, causing Claire to tell Clay, “Maybe I was wrong to ask you to run this.” Can you blame him for decking his sibling, right there in The People’s House?

That’s why Shelby — and the rest of us — are surprised to see Caleb having dinner with Clay at one of The Farm’s houses after the Cleveland issue is resolved. As her ex walks her to the door, he says, “Clay’s struggling, but not with work. Only you.” As she gapes, he threatens to “make your life a living hell” if she continues her flirtation with the only remaining Haas male she hasn’t conquered.