Starz’s American Gods takes on a daunting — let’s call it Goliath-sized — task in adapting Neil Gaiman’s sweeping fantasy novel for the small screen. After all, the cult-favorite book is a road-trip tale, an examination of the nature of belief, one man’s journey toward enlightenment and a primer in world religions.

That’s a lot to fit into an hour each week. Does the freshman drama, which premieres April 30, make it work? Let the congregation say: Amen.

Fans of Gaiman’s 2001 work will be pleased to know that any changes to the narrative have been made mainly to expand, not abridge, the story. (It helps that the author is an executive producer on the project.) The story still follows ex-convict Shadow Moon (played by The 100‘s Ricky Whittle), who makes the acquaintance of the mysterious Mr. Wednesday (Deadwood‘s Ian McShane) and soon finds himself accompanying the older man on a cross-country odyssey.

What Wednesday knows, and Shadow soon cottons to, is that Old World gods (think mythology) and New World gods (think technology) are gearing up for a battle. The coveted spoils: human attention/devotion, because without it, deities tend to fade into irrelevancy.

Deep, eh? Gods embraces the hugeness of its source material by decking out the action in equally large style. Bryan Fuller (Hannibal, Pushing Daisies) and Michael Green (Heroes) are its writers and showrunners, and Fuller’s fingerprints, especially, are easily visible all over the series. For instance, an Episode 2 scene featuring heavy blood spray and strings on the soundtrack will feel so familiar to Hannibal fans, you’ll half expect Dr. Lecter to make a surprise cameo. 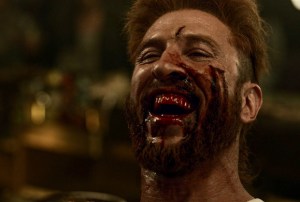 Speaking of blood, the series’ moments of physical brutality are as highly stylized as the rest of it, with copious amounts of the red stuff flying in slo-mo a la Spartacus: Blood and Sand or 300. The effect adds to the drama’s slick, surreal feel; on occasion, scenes feature bodily damage so egregious that all you can do is laugh. (You wouldn’t think that death via hundreds of simultaneously launched arrows could cause a chuckle. As Episode 1 teaches us, you’d be wrong.)

The bulk of Gods‘ humor, though, comes from the glorious McShane. His Mr. Wednesday is every bit the slippery, conniving, perplexing con man of Gaiman’s imagination. Yet the Deadwood alum gives Wednesday a lightness and charm that makes him downright riveting. And in scenes where Shadow plays the straight man to Wednesday’s shenanigans, McShane and Whittle are never better. 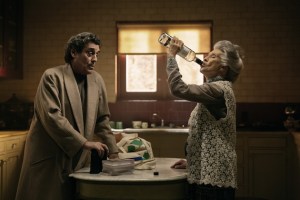 That central partnership is important to the success of the series, and Gods nails it, but the rest of the cast contains some gems, as well. Pablo Schreiber (Orange Is the New Black) brings scrappy fire to the role of bellicose, literally down-on-his-luck leprechaun Mad Sweeney. Cloris Leachman (Raising Hope) is perfectly cast as wise, unimpressed Russian Zorya Vechernyaya. Gillian Anderson (The X-Files), showing up as a twisted Lucille Ball, owns her saucy Episode 2 introduction as the god of Media. And in an episode focusing on Shadow’s marriage (one of the aforementioned departures from the source material), Emily Browning (Sucker Punch) somehow is able to handle numbing despair and toilet humor in a way that makes you like Laura Moon more than you probably should.

Like any journey of belief, American Gods is not without its rough patches. The biggest stumble in the four episodes Starz made available to the press is that the hours at the beginning of Shadow and Wednesday’s trip — especially an interlude in Chicago — drag in spots. It takes until Episode 3 for everything to gel fully, and that wait may feel interminable to those who haven’t read the book and can’t anticipate what’s ahead.

Viewers who are familiar with the work, however, will be happy to know that the novel’s interstitial segments — which offer snapshots of gods at work in the lives of ordinary people — not only have survived the adaptation but provide some of the richest moments in the first part of the season. The one that sticks with me the most is the meeting of a struggling salesman from Oman and a jinn taxi driver, which is acted and shot with simple sensuality and could stand alone as a one-act play. The interlude is a prime example of why the marriage of Fuller and Green’s sensibilities and Gaiman’s prose is a holy thing, indeed.

THE TVLINE BOTTOM LINE: Though it’s slow to hit its groove, American Gods worships at the altar of big story, told stylishly, by a cast in which you can have faith.