Whether you’re a Tudor scholar or someone who’s better versed in Westeros’ royalty than that of England, The White Princess‘ Emma Frost promises you’ll be able to follow along with Starz’s new drama about England at the start of King Henry VII’s reign.

And part of that is thanks to one ballsy, young king.

The eight-episode series, a sequel to the network’s The White Queen, gets underway as Henry Tudor both ascends to the throne and chooses a wife: the politically expedient Princess Elizabeth of York; their union also unites a divided England.

“It was unprecedented what he did, backdating his reign to the day before the Battle of Bosworth Field,” says executive producer Frost (The White Queen, The Man in the High Castle) who adapted Philippa Gregory’s novel for the small screen. “Everyone believed that God is on the battlefield and determined the outcome of the battle… For [Henry] to have the audacity to presume to say that his reign was from the day before, [ahead of] when God would have determined it, is extraordinary.” 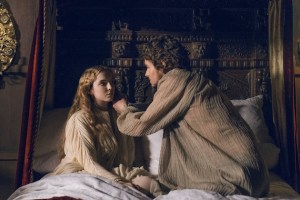 It’s also quite helpful, from a storytelling perspective, at least. Because early in the premiere — which airs Sunday at 8/7c — the new ruler hauls many of his subjects before him and determines whether or not they are traitors; the scene becomes a meet-and-greet, introducing viewers to characters that will become key players in episodes to come.

“It felt like a great way to lay out what all the relationships are, and what the histories of all these people have been,” Frost tells TVLine. “But hopefully, once you’re about 15 minutes into the first episode, you’ll understand who they all are.”

Though Henry’s actions are, indeed, revolutionary, The White Princess is really the story of Elizabeth, who finds herself pressed into a marriage she does not want, forced to be a symbol of unification between two warring houses, and torn between loyalty to her family and love for her husband. (Yes, Henry and his bride eventually get quite close.) Played by Jodie Comer (My Mad Fat Diary), Lizzie is cunning. She is brave. And she is, as one character in the series reminds us, the consummate politician in the final years of the Wars of the Roses

Ahead of the series’ premiere, here’s a brief White Princess primer, courtesy of Frost and star Jacob Collins-Levy, who plays Henry.

OLD NAMES, NEW FACES | Though some of the same characters appear in both The White Queen and The White Princess, they are played by entirely different actors. “White Queen covered 24 years on its own, so we had to do some fairly drastic aging of the lead actors by the end of it,” Frost explains. “But most of the characters from The White Queen died anyway, so the only sensible solution was that we would treat this completely fresh and we would recast all of it so everybody was age appropriate.” Plus, she notes, “Some of the roles that are smaller in The White Queen are much bigger now.”

LONG LIVE THE QUEEN | Frost & Co. saw Comer’s audition on the very first day of casting, and that was that. “We knew we wanted her to play Lizzie. It was a total no-brainer,” the EP says. “She’s used to playing a lead. She’s already very confident in her abilities as an actress, and that’s what she brought: that innate quality that Lizzie has which is, ‘I’m a royal. I was born to this, and I’m entitled.’ She has that wonderful confidence that Lizzie had to have.” She chuckles. “Jodie was just a slam-dunk.”

LONG LIVE THE KING | Finding a king to match Comer’s Lizzie, however, proved difficult. “Henry was a really tricky role because, when we first meet him, he’s so screwed-up,” Frost says. “To find an actor who could bring the sophistication and complexity of that psychology, but also that we would absolutely root for as the male in the love story… I kept saying the whole way through, ‘We have to find an actor that the female audience responds to, and that they want to love him better. But he has to be screwed up, instead of rejecting him and hating him for that.’ We have to go oh [gasps] he just needs a hug! He just needs to be loved better by a good woman.” The EP says she and her team watched loads of audition tapes and were losing hope… then Levy’s came to her attention.

The relative newcomer from Australia quickly became a frontrunner. “I went, ‘S–t, this guy is really good,'” Frost recalls. “And he has this wonderful, soulful, David Bowie-like quality to him.”

Levy wasn’t familiar with Gregory’s books or the previous miniseries, “but I loved the historical period genre through the prism of a feminine viewpoint,” he says. “Reading the scripts, there was something about the project that I felt very attracted to, but still thought I’d never get to play the lead in a show like this at where I was in my career. It just felt too soon.”

He flew to London for an in-person audition. “The third day there, I got the call that I had the part. I couldn’t believe it,” he says. He laughs as he recalls that he’d only packed clothes for a five-day trip. “I didn’t go home until December that year.” 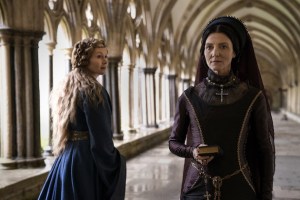 MOTHER OF A ROLE | Game of Thrones fans will recognize Michelle Fairley as Henry’s calculating, pious mother, Lady Margaret Beaufort. “We didn’t consider anybody else,” Frost says. “We offered it to Michelle, who very happily loved the script. She loved the role, so she was a slam-dunk, as well.”

ROYALTY’S TRUE POWER PLAYERS | Though the men of The White Princess hold court and wage traditional wars, it’s the women who make things happen. “The whole show shines a bright light on power and different genders are given — and have utilized and wielded — power,” Frost says. “It has always been the female way, historically, that we have to do things in a more subtle way, that we use a battle of wits and psychology.” Because Elizabeth is at a disadvantage at the series’ outset, “she has to come at things differently,” Frost adds. “She realizes there are much more subtle webs she can weave, of psychology, sexual power and intelligence. It really is quite political.”