In the third episode of The Handmaid’s Tale, Hulu’s eerily prescient series adaptation of the popular novel, there’s a quote that might’ve seemed like no more than standard dystopian-fiction fodder just a few years ago.

“When they slaughtered Congress, we didn’t wake up. When they blamed terrorists and suspended the Constitution, we didn’t wake up then, either,” Offred, played by Mad Men‘s Elisabeth Moss, intones via voiceover. “They said it would be temporary. Nothing changes instantaneously. In a gradually heating bathtub, you’d be boiled to death before you knew it.” 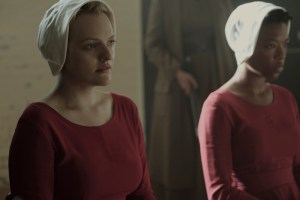 After all, the parallels between the world seen in Offred’s frequent flashbacks — an America slowly ceding control to a totalitarian theocracy bent on returning to “traditional values” — and our own current political climate are tough to ignore. But I’m getting ahead of myself.

The hour-long drama takes place in the near future, after a religious-backed opposition group stages a coup and takes control of what was known as America. When the new world order is established, it takes the form of a caste society in which fertile women like Offred are deemed “handmaids,” nothing more than “two-legged wombs” forced to wear red robes, act demure and regularly bed the privileged males who run the show in an effort to subvert a severe fertility crisis.

The women are forced to quote Scripture and act subservient. They are forbidden to read or hold property. They are encouraged to report any alleged deviance to authorities, whose philosophy on punishment is decidedly Old Testament. Gays and lesbians are denounced, removed and harmed. Free speech is no longer the norm. Misinformation and obfuscation rules.

The overarching dread of The Handmaid’s Tale is that the world beyond the handmaids’ white, winged veils feels a heck of a lot like something that could, one day, play out in our own. Unsettling, no?

Blame the stellar cast, which includes Gilmore Girls‘ Alexis Bledel, Chuck‘s Yvonne Strahovski, The Leftovers‘ Ann Dowd and Orange Is the New Black‘s Samira Wiley. Blame the excellent team behind the scenes, which includes writer Bruce Miller (The 100) and director Reed Morano (Looking), who helmed the first three episodes. And while you’re at it, blame Atwood’s 1980s book, which provides plenty of rich story and serves as a jumping-off point for paths not taken in the source material. 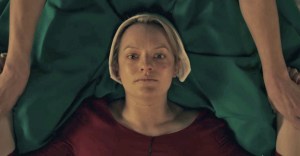 In the first three episodes, which Hulu made available to the media, those paths prove intriguing even for those who know the book by heart. Atwood’s work, after all, is Offred’s story: Anything that happens to anyone in her orbit is filtered through that character’s point of view. And though Hulu’s adaptation certainly centers on Offred’s experience as a slave hoping to find the 8-year-old daughter she was forced to give up — and Moss’ barely-restrained fury over her new lot in life is gorgeous to behold — the other characters are equally compelling. And when we see moments that Offred simply cannot (one book diversion pertaining to Bledel’s handmaid character, Ofglen, comes to mind), that story amplification pays off.

Along the way, The Handmaid’s Tale takes its time dropping clues, doling out hints about how Offred’s reality came to be — and how its power structure might be dismantled — in the same way that Dowd’s handmaid-minder Aunt Lydia doles out corporal punishment: sporadically, yet with maximum impact. Why does The Commander (played by American Horror Story: Asylum‘s Joseph Fiennes) take an unsanctioned interest in Offred? What will become of the character who ends Episode 3 having undergone genital mutilation surgery against her will? Is Offred’s daughter, Hannah, still out there somewhere?

If there’s any drawback to the series, it’s that the realness of the writing and the relatability of the performances conspire to make the whole experience an unsettling one. In spite of that — hell, because of it — watch it anyway.

THE TVLINE BOTTOM LINE: With a superb ensemble and a disturbing premise, The Handmaid’s Tale is a riveting nightmare that’s well worth your time.