The following contains spoilers from Tuesday’s midseason premiere of Fox’s Brooklyn Nine-Nine. Proceed at your own peril.

Well, she was dead. It was for two minutes, during which time she saw an ethnically ambiguous female God, then was resuscitated, having somehow survived that bus accident just two months ago.

But the heck with trying to make sense of any of that. “Gina Linetti’s back, baby,” and the Nine-Nine has nothing to worry about now… right?

In the spring premiere, Capt. Holt informs Jake & Co. that the NYPD is looking to close down one of Brooklyn’s 22 precincts, and as such the Nine-Nine will undergo an audit to determine whether it can stay open. Handling the audit is none other than Teddy (Kyle Bornheimer), Amy’s incredibly boring ex-boyfriend who in the years since we last saw him has gotten super into jazz brunches (blech!) and whose favorite iPhone app is, umm, Contacts. But worse than any of that is the fact that he still hasn’t gotten over Amy.

Teddy is eventually forced to recuse himself from the audit after proposing to Amy twice (!), but that only makes matters worse. Succeeding him as auditor is Lt. Veronica Hopkins (Vice Principals‘ Kimberly Hebert Gregory), Terry’s former squeeze from way back when who for some unknown reason is still upset with him. When she arrives, she promises the sergeant to have the Nine-Nine shut down.

RELATED New Girl Finale: Was That the End?

TVLINE | Gina is revealed to be alive pretty much immediately. Was there ever any talk in the writers’ room of prolonging the cliffhanger and making viewers wait to learn whether she survived?
We were a little bit surprised by the level of Internet concern about her survival. Not because we didn’t think people loved her — we knew people loved her — but it just felt clear to us that we would never kill off a beloved character. So I think once we read [the fans’] tweets… we realized we really should pay it off almost instantly and let people know what’s going on.

TVLINE | And if you hadn’t revealed that Gina was OK in the cold open, we would have never gotten to see her dance to Salt-N-Pepa’s “Push It” while screaming in agony. 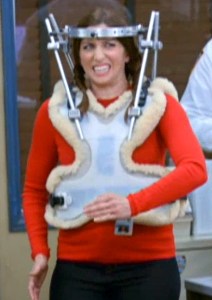 [Laughs] Once that idea of her dancing in the halo was pitched, it was clear that that was the way to start the episode. At the beginning of the season, Chelsea [Peretti] came into the writers’ room and we discussed different ideas. One of the things we talked about… was putting her in a medical halo, and so in a way, the tail was really wagging the dog. She got hit by a bus because we wanted to put her in the halo.

TVLINE | In the show’s timeline, it has only been two months since the accident, but Gina’s in full recovery mode. Is that a storyline that’s going to play out over multiple episodes, or is it pretty much put to bed after the reveal that she miraculously survived?
She takes several episodes to recover. We don’t make a very big deal out of it but, you know, she wears a neck brace in the episode afterwards, and I think she references [her recovery] a few times. 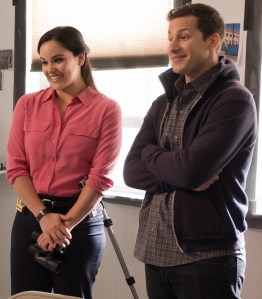 TVLINE | Teddy’s return obviously didn’t pose any sort of legitimate threat to the Jake and Amy relationship. If anything, having him back showed how well they work as a couple. Is it safe to assume that these two are in it for the long haul?
Our philosophy with Jake and Amy has always been to play them one step at a time and to play them very realistically. We never had an end goal. In the beginning, they sort of developed a chemistry and then started dating… Whether they’re in it for the long haul is something that even they would ask, [but] they definitely seem to be having a very healthy relationship.

TVLINE | How worried should fans be about Veronica getting her revenge on Terry? Can there still be a Brooklyn Nine-Nine without, well, Brooklyn Nine-Nine?
We should be worried. She has the power to do it and she’s threatening to do it, so the Nine-Nine has to work together to try and prevent her from succeeding.

TVLINE | Will viewers be surprised to learn what horrible thing Terry must have done to make her mad? I hope! [Laughs]

What did you think of Brooklyn Nine-Nine‘s first episode back? Grade it via our poll, then back up your choice in the comments.