Season 6 of Homeland wrapped up with Sunday’s finale… but if you’re looking for a happy ending, you’ve come to the wrong place.

Dar Adal walks through that favorite restaurant of his and back to the meat locker, where he finds a U.S. senator tied up in his underwear. Dar says this is “a reprimand” for keeping him out of the loop. Then a lackey comes in to douse the senator with a bucket of water. Dar grills him about Quinn and the “Toxic Soldier” sock-puppet plot; the senator says he doesn’t know, but he later spills some very interesting intel to Dar. 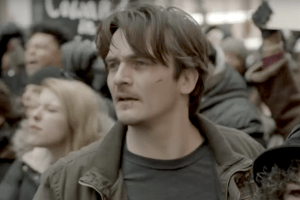 Carrie and Quinn rush back from the site of last week’s Queens bombing to Manhattan, where Keane is holed up in her hotel — and where the black-ops soldiers who rigged the house to explode are headed to serve as “reinforcements.” A massive protest is still raging outside the hotel, and Carrie heads inside to find Keane while Quinn stays outside to hunt for the soldiers. He notices an alarming amount of military firepower outside… including more than a few snipers in position to fire. Also outside: General McClendon, the head of the black-ops team who’s in bed with Dar Adal — and who’s now in charge of Keane’s security.

In the hotel suite, Saul compliments Keane for having the “balls” to face off with O’Keefe. She frets that she’s “not ready for this, any of it,” but Saul talks her off the ledge. Carrie gets up there and tries to tell Keane and Saul about the Queens bombing and McClendon’s involvement, but suddenly, they’re all rushed out of the hotel by the Secret Service due to a “credible” bomb threat. Keane wants to wait for her staff, but she’s told that’s not possible. (Boy, for a President-elect, she sure gets told “no” a lot.) Her chief of staff Rob is placed in a different SUV, along with a Keane lookalike decoy. 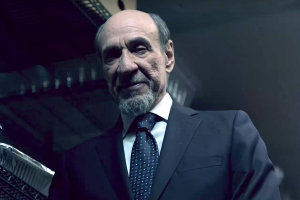 Carrie tries to call Quinn to warn him… but she gets Dar instead. He tells her Keane’s life is in danger, and not to let the motorcade leave the building. She doesn’t trust him, though, after all he’s pulled with Franny. But he puts the pieces together for her: They’re framing Quinn as Keane’s assassin. She stops one of the SUVs before it can leave, but one gets out to the street… and promptly explodes. (RIP, Rob and Fake Keane.) Carrie and Keane are quickly rushed to safety. Or, I should say, “safety.”

McClendon’s special-ops thugs move in and hunt for Keane, with Quinn lurking nearby. While the thugs take out one of Keane’s Secret Service guys, Carrie takes her into a service elevator and pulls the emergency-stop button. She calmly informs Keane she’s in danger and they’re currently “in a kill-zone.” (Thanks for the tip!) They head to the basement, and when the doors open, a gun’s in Carrie’s face. But it’s just Quinn. He herds Carrie and Keane into an SUV and takes the wheel, peeling out of the garage as the soldiers open fire.

Once they hit the street, they’re basically trapped, with gunmen on either side. Quinn tells Carrie and Keane to stay down, and slams the gas, driving through a barricade while soldiers pump at least a half-dozen bullets into his chest. He gets Carrie and Keane to safety… and then slumps over the wheel. Is this it? Can it be true? The mighty Quinn… dead? Carrie chokes back tears, while Keane says “he saved our lives.” A crowd gathers as we… cut to black.

We jump forward to “six weeks later”: O’Keefe is on his radio show, ranting that Keane was inaugurated in secret, behind closed doors. He clues us in that 60 government officials, including a U.S. senator, are currently in military jail in connection with the assassination attempt on Keane, and insists we’re headed for “civil war.” Meanwhile, Carrie reassures a room full of intelligence officials; Keane is too paranoid to meet with any of them, so Carrie’s acting as her liaison. 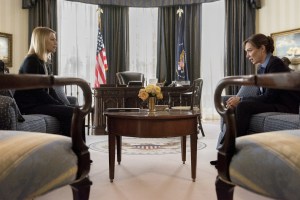 Saul tries to catch Carrie after the meeting; he notes they haven’t spoken since Quinn’s memorial. (Oof. So it’s true.) She bristles when he notes she didn’t speak at Quinn’s service; he insists she’s going too hard, and is bound to “hit a wall.” She tells him to stop worrying about her, and storms off to the Oval Office, where Keane is waiting. She wants to officially make Carrie her senior adviser, with an office in the West Wing. Carrie says it’d be “the greatest honor of my career,” but she needs to check in with Franny first. (She’s getting home visits now… which is progress, I guess.)

Saul heads to prison, where Dar Adal is waiting for him in a blue jumpsuit. “You look like s–t,” Saul says with a smile. Dar tells him people keep trying to get him to talk, but he won’t. “I wish you’d given me a chance to talk you out of it,” Saul says. Dar says he never meant for things to get this ugly. So Dar has a heart after all? He’s still no fan of Keane’s, though: “There’s something off about her… something distinctly un-American.” 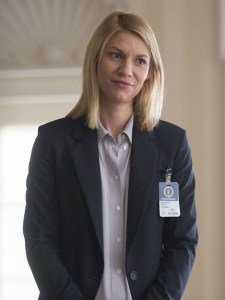 Carrie gets a visit from a drunken Max, who says it’s “a f–king disgrace” how they’re making Quinn into some kind of action hero. She stashes him in the basement, though, because Christine from child-services is arriving for that home visit. Carrie shows her Franny’s room, with all her stuffed animals arranged on the bed; Christine says she’s passed “with flying colors,” and they can set up a new court date for custody right away. Carrie tells her about the D.C. job, and that all seems fine with Christine… so Franny might be headed home soon. (Yay!)

Carrie goes down to the basement to find Max passed out, and starts cleaning up. In a drawer, she finds a copy of Dickens’ Great Expectations, with an envelope inside it. In the envelope: pictures of Quinn’s baby boy, the one he never really met. Carrie’s chin trembles as she looks through the photos… and then she stumbles on a picture of herself. Aw, Quinn loved her! She breaks down in sobs.

Carrie gets a frantic call from Saul: He’s being put under arrest, and Saul blames Keane’s paranoia. He’s not alone, with officials from the CIA, the State Department and other high levels of government in handcuffs. Carrie calls Keane, but can’t get through, so she seeks out Keane’s new right-hand man David Wellington and yells at him about Saul. He tells her NSA surveillance connects Saul to the conspirators. Carrie tries to get into the Oval Office, but she’s kept outside. She yells in to Keane, “Innocent people are being arrested in your name!” Keane hears her, but remains inside — alone.

The final image of the season is Carrie staring out at the Capitol building… and she’s not feeling patriotic. Will the Keane storyline continue next season? And will we even want to keep watching without Quinn?

Got thoughts on the Homeland finale? Give it a grade in our poll below, then hit the comments for a full debrief.