This week on Homeland, Carrie and Quinn get very warm in their mission to bring Black-Hatted Guy to justice and expose Dar Adal’s evil scheme… and maybe get a little burnt in the process.

They’re still in that house in Queens, and Quinn has Black-Hatted Guy in his sights. He tells Carrie about the Medina Medley van in the garage; BHG must’ve swapped out Sekou’s van for the one that blew up. Carrie assures him that Keane’s solicitor general can put BHG away, but Quinn refuses: “The guy is mine!” Carrie tries to talk him out of cold-blooded murder, but he hits back at her: “You owe me! Because you made me this way!” In fact, he tells her she made him into “a f—king monkey,” and then hops around making monkey noises, so Carrie gives up any hope of having a rational adult conversation. (Maybe Franny could help?)

But Quinn doesn’t pull the trigger yet, and the next day, he gives Carrie instructions on how to get inside BHG’s safe house. She does, and finds the Medina Medley van in the garage — and a photo of Sekou and his family in the van’s sun visor. As she keeps searching, though, someone puts her in a chokehold. It’s Black-Hatted Guy! They struggle, and she fights him off… and then Quinn walks in and shoots BHG in the leg. And he’s not done: He viciously beats BHG to death, pummeling his face with the butt of his gun, despite Carrie’s protests. So, one Season 6 villain down.

Carrie tells Quinn she can probably get him immunity, but he doesn’t want it. “He killed Astrid,” he growls. Actually, he blames himself for tossing Astrid’s bullets, and won’t accept Carrie’s apologies for getting him out of that coma: “I’ve always been this way.” When the solicitor general shows up, Carrie shows him BHG’s body and the van, and asks him about Quinn’s immunity. “We’ll make it work,” he tells her. She goes to tell Quinn the good news… but he’s more interested in staring at a half-erased whiteboard the other mercenaries left behind.

He tries to make out an erased letter: Is it a B, or an R? He theorizes it’s code for the local time where the mercenaries are headed. If it’s an R, that’s Romeo, which means “east coast” — where they are right now. Carrie runs outside and tries to get Keane’s chief of staff Rob on the phone, just as an FBI agent is cutting a lock on the house’s garage. He lifts the door, and BOOM! The garage explodes in a ball of flames. When Carrie regains consciousness, dead bodies are strewn everywhere.

Did Quinn die?? Of course not. Do you even watch this show? He walks out of the house with nothing more than a mild cough. But this does sort of complicate matters for Carrie, does it not? So the mercenaries knew they were coming and booby-trapped the place? Does the explosion mean that the evidence implicating Dar Adal is destroyed? And are those mercenaries headed right for Keane? We only have one episode left, you know!

Elsewhere in “R for Romeo”: 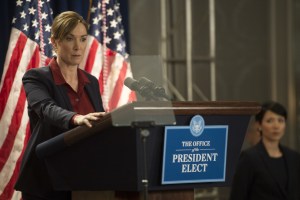 DEBATE TIME | Keane is still seething after O’Keefe’s attack ad, which has gone viral; protestors are lined up outside her hotel, chanting, “Not My President!” She calls the ad “a knowing lie” in a press conference, and challenges the people behind it to “show their faces.” Right on cue, O’Keefe calls her office and claims responsibility for the ad, asking for a one-on-one sit-down with Keane. Her advisors tell her to decline, but Saul, who’s worked his way into Keane’s inner circle, says, “You can’t afford to stay silent.” So she heads to O’Keefe’s TV studio for an on-air interview.

It gets ugly quick between them, with Keane calling the ad “vicious slander” and O’Keefe accusing her of stealing the election on her son’s “fake war record.” She calls on him to release the unedited video, and then drops a bomb, alleging that fake “sock puppet” bots are responsible for making the ad go viral. She says his efforts are “funded by the same establishment you despise,” and promises him he’ll be prosecuted and shut down. But on the drive back, a protestor hops the fence and gets clipped by Keane’s SUV, leading to a security lockdown.

Rob assures Carrie on the phone that “reinforcements” are coming in to help secure Keane’s position — but who are these reinforcements? Could they be driving in from a little house in Queens, perhaps? 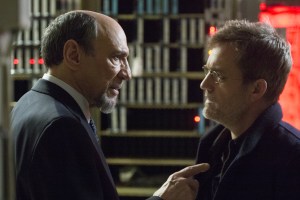 * This week’s other subplot had Dar Adal using Max’s hacking skills to break into O’Keefe’s computer and find out what he has planned for Quinn. Max found a propaganda web site set up in Quinn’s name, under the handle “Toxic Soldier,” that’s been pumping out conspiracy theories and anti-Keane memes for months. Max thought it couldn’t be Quinn; he doesn’t even use email. But Quinn was listening to O’Keefe on the radio when the season began, remember? Hmmm.

* People are fervently protesting outside Keane’s hotel, her Secretary of Defense nominee is pulling out, and reporters are asking her if she plans to resign — because her son supposedly ran away from a battle? This all just feels like a tempest in a teapot, to be honest. Unless those really are “paid protestors”? Damn you, George Soros!

* Did the solicitor general really pull back the bloodstained sheet over Black-Hatted Guy’s dead body without any gloves on? He might want to brush up on proper crime-scene procedure. (Of course, that’s all blown to hell now… literally.)

* So what’s Dar Adal’s endgame with recruiting Max and infiltrating O’Keefe’s computer? I know it’s evil; I’m just not sure how evil at this point.

* If Quinn’s impression of a hooting monkey doesn’t score Rupert Friend that elusive Emmy nomination, what on Earth will?