Carrie admitted defeat to Dar Adal this week on Homeland to get a chance to see her daughter Franny. But look out, Dar: Your evil empire has some cracks in the foundation.

Carrie’s excited for her supervised visit with Franny, but first, she has to meet with Keane’s DOJ nominee and testify against Dar (and Saul) in the whole Berlin mess. When the driver drops her off to testify, though, he makes an ominous reference to her visit with Franny. Carrie quickly calls the child-services worker Christine, who tells her (surprise!) Franny is feeling ill and they’ll have to postpone. That’s enough to get Carrie to cancel her testimony and to call the driver back: “Tell Dar Adal he wins. Now I want to see my daughter.”

Dar takes a victory lap by meeting with Keane and presenting her with his recommendations for her cabinet — including two people who called her unfit to be President. She bristles at this, and accuses Dar of feeding her bad intelligence and leaking things about her to the press: “60 million people voted for me. Who the hell voted for you?” He warns her not to pick this fight with him: “It’s a war you won’t win.” When he leaves, she’s determined to cut Saul a deal so he’ll testify against Dar. But Dar has a few tricks of his own: He calls O’Keefe, who says, “It’s time to weaponize some information.” 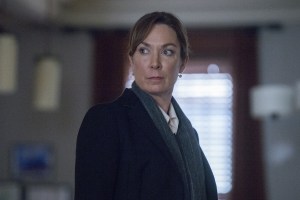 After Carrie kisses Dar’s ring, she gets a call from Christine, and what do you know? Franny’s fine after all, and ready for her visit! Keane drops by Carrie’s place to find out why she bailed on testifying; Carrie will only say, “My priorities shifted.” Keane puts it together that it involves Franny, but Carrie doesn’t want to be strong-armed by her, either. “I can’t,” she tells Keane, walking out on her. She goes to meet Franny — and it is genuinely sweet to see mother and daughter finally getting to hug. But Carrie also notices something on the receptionist’s computer: O’Keefe’s vicious attack ad against Keane and her son Andrew.

The attack ad is plastered all over cable news, with more than a million views on YouTube. Keane knows that it’s “Dar Adal’s handiwork” and is fuming: “We need to respond.” Her advisors tell her to just change the subject, but she wants to address it at a press conference in the morning. Privately, she tears up, blaming herself for even bringing up Andrew’s name in public: “No one should be allowed to see this… Have these people no f–king shame?” (Short answer? No, they do not.)

But don’t worry: There’s a certain unkillable assassin out there on the case! Carrie comes home to find Quinn’s drug buddy Clarice on her stoop, who takes her to an empty house in Queens, where Quinn is perched with a sniper rifle. He tracked Black-Hatted Guy down to the house across the street — a safe house where a young Quinn used to bunk up with his ragtag team of mercenaries. And hey, there’s also a Medina Medley van in the safe house’s garage. Yep, the noose is around Dar’s neck… time to start tightening.

Elsewhere in “The Flag House”: 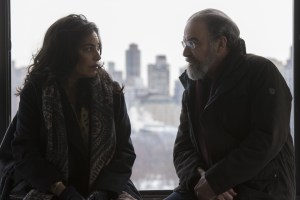 ESCAPE PLAN | Saul’s not waiting around for his CIA reputation to go up in flames: He has a clandestine meeting with a NYC jeweler, who gives him a bag packed with guns, cash, fake IDs — and an envelope of loose diamonds. He tells his ex-wife Mira that he’s leaving the country: “I have to disappear.” He’ll hide out in a Greek rectory that they planned to be their lovers’ hideaway, and he needs her to keep quiet. But when he tells her he has to leave because he’ll be “publically humiliated,” she comes back with: “When has that ever made the slightest bit of difference to you?”

Meanwhile, Max is still snooping around that boiler room full of computer nerds making “sock puppet” online profiles for O’Keefe. He sees Dar and O’Keefe having a meeting and manages to capture some of it on video before getting caught and thrown out. Later, Saul stops by Carrie’s to tell her he’s changed his mind about testifying. She’s not home, so naturally, he breaks in and makes himself a pot of tea. (This is the downside to having a CIA lifer as a friend, apparently.)

Saul looks upstairs and, finding a locked door, searches around for a key and unlocks it. Inside the room, he finds a classic Carrie Mathison murder board, with strings everywhere connecting all of this season’s plot points: Sekou, Keane, Conlin, all of it. He also opens her laptop, and finds a new message from Max on it. It’s the video of Dar in O’Keefe’s office. Better cancel that flight to Greece, Saul.

* So that opening scene with Quinn and the waitress at the diner: She knows him from his days as a young mercenary, right? And did we ever learn why the GPS led Quinn there, and not to the house where BHG is hiding out?

* Did anyone else get the sense that Saul wasn’t completely forthcoming with Mira because he didn’t want to tell her about the whole Allison Carr debacle?

* Why would there be a Medina Medley van in the mercenaries’ safe house? Sure, seeing the van there helped Quinn piece everything together, but why would they keep evidence that they’re involved in a massive bombing… in their garage?

* Dar noticed a photo of Quinn on O’Keefe’s laptop, and O’Keefe called it “a work in progress.” What nefarious plans does he have for our Quinn??

* Did kind of enjoy seeing Clarice again, especially when she reacted to Carrie still thinking Quinn is in Bellevue: “Honey… you are way confused.”