Just how worried should fans of Brooklyn Nine-Nine be about whether Gina Linetti survived that bus accident? We posed that very question to co-creator Dan Goor ahead of Tuesday’s spring premiere (8/7c, Fox).

The Andy Samberg comedy, which has been on hiatus since New Year’s Day, admittedly won’t make fans wait too much longer to learn Gina’s fate. Goor promises that they “will reveal what happens almost immediately in the first episode back.”

The episode, aptly titled “The Audit,” features the return of Teddy (Kyle Bornheimer), Amy’s incredibly boring, pilsner-obsessed ex-boyfriend who we last saw during Season 2’s least romantic getaway ever. As you’ll recall, Jake surprised Amy by inviting Teddy to join them on an overnight trip as part of a prisoner transfer, where Amy proceeded to dump him over dinner. Now Teddy is tasked with auditing the Nine-Nine, which is facing potential closure as the NYPD looks to shut down one of its precincts. 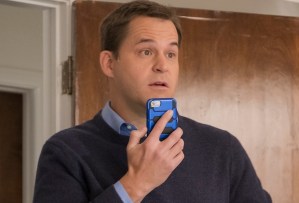 “Jake and Amy are understandably freaked out when Teddy shows up,” Goor says. “Jake feels very responsible for Amy’s breakup with Teddy,” and his guilt isn’t helped by the fact that he is now in a long-term relationship with the auditor’s former squeeze. Both he and Amy worry that “the fate of the Nine-Nine” could very well rest on their shoulders, depending on how resentful Teddy is of the both of them.

The guest stars keep a-comin’ in the following episode (airing April 18), when the Nine-Nine takes on the case of a crime that goes down on the set of a Law & Order-esque procedural. Castle‘s Nathan Fillion once again assumes the role of TV detective, this time playing Mark Devereaux, star of the show-within-a-show who believes himself to be Jake and Rosa’s equal.

“It should be pointed out that Jake and Rosa are huge fans of Mark Devereaux,” Goor says with a laugh, so “it is with a heavy heart that they realize that he’s actually quite annoying.”

Are you psyched for Brooklyn Nine-Nine‘s return? Nervous about Gina’s survival odds? Drop your thoughts in a comment below.