Warning: This post contains spoilers from the run of Netflix’s 13 Reasons Why.

At the end of 13 Reasons Why, we finally learn the role Hannah’s classmates and the adults in her life played in her decision to commit suicide.

Anyone else feel somehow worse after the revelation?

The Netflix drama was never going to have a happy ending — a teenager is, after all, still very much dead following some pretty terrible treatment from her peers — but the loose ends left dangling at the end of the (first?) season are unsettling. They also can be interpreted several ways.

Will Mr. Porter do the right thing and go to the authorities, now that he’s in possession of — and a significant player on — Hannah’s tapes? Will that even matter, now that the Bakers have copies of the audio files? Is it just a coincidence that Alex takes a bullet, or can we infer that an ammo-stocking Tyler now is shooting more than photos?

And, for the love of God, will someone give Bryce the life-destroying retribution he so sorely deserves?

There’s certainly plenty of fodder for the streaming video site’s adaptation of Jay Asher’s novel to come back for a second season (which executive producer Selena Gomez has said is a possibility). And if it doesn’t, well, life is all about not always having the resolution we seek, right?

ON THE RECORD | The entire hour is peppered with Hannah’s classmates giving their depositions. As Zach tells the lawyers that he and others said some mean things to her, we see Past Hannah getting the recorder from Tony and announcing to us that she’s giving life one more shot. She gives a quick recap of all of her torment (and the tapes so far): “I started with Justin and Jessica, who each broke my heart. Alex, Tyler, Courtney, Marcus, who each helped to destroy my reputation., on through Zach and Ryan, who broke my spirit. Through Tape #12, Bryce Walker, who broke my soul.”

After making Tape 12, she tells us, she feels a small bit better. “For a minute, just a minute, I felt like I could beat this.” And that one last shot she’s taking? It comes in the form of a visit to Mr. Porter, the school’s guidance counselor. But she also swipes a package of razor blades from her parents’ drugstore, so ending it all is still very much on Hannah’s mind. 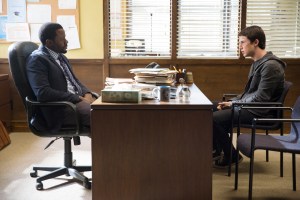 YOU HAD ONE JOB, PORTER | So we watch Hannah visit Porter’s office on the day of her death; unbeknownst to him, she’s got the recorder in her bag, and it’s capturing everything they say. She tells him she feels “lost and sort of empty” and expresses a desire for “everything to stop — people, life.” She’s crying. She’s clearly in trouble. But when she tells him about the night in the hot tub, Porter does pretty much everything wrong. He goes as far as saying that she made a “decision” that she now regrets, and that sometimes the best course of action is to “move on.” And when Hannah won’t say who hurt her, Porter considers the matter all but done.

“She didn’t give you the name, she didn’t use the word, but she described the rape,” Clay says as he sits in Porter’s office in the present, laying the school staff member bare as he not only reveals that Bryce was the student in question, but that Hannah taped her time in the guidance counselor’s office.

Clay goes on to tell the clearly upset Porter that a) Hannah made tapes outlining why she committed suicide, b) he’s on Tape 13, and c) everyone who has heard the tapes knows he’s on Tape 13. Then the boy says that he’s giving Porter all of the tapes, as well as the decision about what to do with them. Oh, and he added Tape 14 — aka Bryce’s confession — “which I hope will help you make that decision,” he says before he gets up to leave the office.

“It has to get better, the way we treat each other and look out for each other. It has to get better somehow,” the teen says as he leaves. And when he sees Skye in the crowd while students are walking to their classes, he impulsively asks her if she wants to hang out right then, acknowledging that he’s not OK. She says yes (it’s very sweet), and later we see them riding in a car with Tony and his boyfriend. And that is the closest thing we get to an upbeat ending in the hour, because…

THE BEGINNING OF THE END | … we’re about to witness the rest of Hannah’s last day. She leaves Porter’s office hoping that he’ll come after her, and she’s devastated when she realizes that he answers a phone right after she goes, seemingly not giving her another thought. “Some of you cared, none of you cared enough,” Hannah narrates on her final voiceover. “Neither did I, and I’m sorry. So, that’s the end of Tape 13. There’s nothing more to say.”

Then we watch as Hannah calmly goes about mailing the tapes, returning her uniform to the theater, putting on old clothes, filling her bathtub and, just about the moment I’m sure the camera is going to cut away from Hannah slitting her wrists… it doesn’t. We watch in terrifying, visceral detail as the girl uses the blades on herself, then bleeds out. And I honestly can’t tell which is more painful to watch: Hannah’s death or her mother’s finding her and mindlessly saying, “It’s OK, it’s OK, you’re OK,” as she slips on the wet floor and kneels by her daughter’s side.

THE BAKERS FIND OUT | Now here’s where things get very interesting. Tony drops a flash drive by the Bakers’ store, saying that he thought he was helping Hannah by keeping her secrets, but he now thinks that was wrong. Mrs. Baker has the drive in her hand while listening to Tyler’s deposition, but when he mentions on the record that “there are tapes” detailing the abuse Hannah endured, she sits up and takes notice — yet says nothing. (Later, we see Mr. and Mrs. Baker hold hands as they start to listen to the recordings.)

The Bakers’ lawyer later asks Jessica if she knows about the tapes; she’s shocked, but she denies it. Later that night, though, despite earlier in the episode indicating to Clay hat she wasn’t ready to say anything about Bryce’s attack, she begins to tearfully tell her dad about what happened at the party where she was raped.

Meanwhile, an adrift Justin meets up with Bryce, who’s shocked to find out about the tapes and that Hannah was hiding in the room when he violated Jessica. Then Justin takes off, making it clear that he’s disgusted by everything about Bryce. (Join the club, dude.)

Earlier, we see Tyler’s mother worry that his participation in the deposition will make him even more of a target for his mean classmates. “Don’t worry, Mom,” he says, I can take care of myself.” What we know and she doesn’t: He’s stockpiling weapons in his bedroom. And it can’t be a coincidence that he takes down a photo of Alex in one scene… then we learn at the end of the episode that Alex suffers what is believed to be a self-inflicted gunshot to the head, can it?

What did you think of 13 Reasons Why‘s finale? Grade the episode via the poll below, then hit the comments with your thoughts!