In Sunday’s Season 7 finale of The Walking Dead, in spite of a forewarned act of betrayal — and because of a stunning act of heroism — the rebel alliance managed to drive the Saviors away from Alexandria. But, as Rick & Co. knew all too well, they’d won only a battle, not the war. Here, showrunner Scott Gimple walks TVLine through Sasha’s heartbreaking sacrifice and previews the epic combat in store for Season 8.

TVLINE | Let’s start with Sasha. Was her death the result of Sonequa Martin-Green wanting to move on to Star Trek: Discovery, or was it strictly a storyline decision?
Storyline. The folks over at Star Trek got lucky with the timing.

TVLINE | Were there discussions between AMC and CBS All Access to keep her casting on Discovery a secret, so as not to tip off fans that Sasha wouldn’t survive the season?
We were hoping to [keep her casting on the D.L.], but it didn’t happen, which was kind of a drag. It seems like they did try, it just got out. But that just put it on us to tell a great story. The episode is the most important thing.

TVLINE | Sasha’s death was clearly kind of a nod to Holly’s death in Robert Kirkman’s comics. Did you have to change it up and use the coffin so as not to replicate the Reed-in-a-hood scene from Fear the Walking Dead?
[Holly’s death is] absolutely sort of the kernel from which [Sasha’s death] comes. But the Sasha/Holly deaths are so different. Holly was a victim of Negan. She was used basically as part of an ambush. Fear did wind up taking that, but they used it in a different way, which was sort of desperation. The characters needed to have the person to trade, and the hood was the only way to [make it appear that they] weren’t dead. On Walking Dead, this was about Sasha having a shot at taking out Negan [by] making herself into a weapon. That story was going to be the story no matter what. Would the hood have worked the same way as the coffin? We don’t know. It all kind of worked together. But even if Fear hadn’t done that, I’m not sure we would have done the hood, exactly.

TVLINE | It would have been kind of hard for Sasha to poison herself discreetly while wearing a hood.
Yeah, it would have been quite noticeable. People would’ve been like, “What are you doing with that pill under the hood?” I was happy that we got to see Sasha make the decision [to weaponize herself] and have those last minutes be cumulative with what Sonequa did, which was one shot broken up over the course of the episode. I thought it was very beautiful. If the hood was hers to use, I’m not 100 percent sure we would have used it. 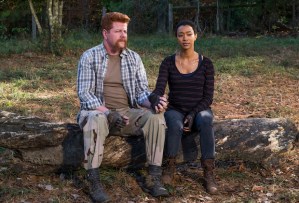 TVLINE | How did you keep Michael Cudlitz’s return a secret? Had you shot those Abraham/Sasha seen before his initial run on the show ended?
Again, we just got real lucky. We moved him in in a quiet, military fashion and moved him out the same way. I was very happy with the fact that folks didn’t know [to expect him] — both on the show and Talking Dead, for that matter!

TVLINE | Jadis betrayed Rick, yet she clearly can’t trust Negan. No one can. So where do you go with an ally-less character like that?She’s a businessperson. She’s certainly not sentimental in any way. [But] she’s all about her people, and they are all about themselves. I think she’s pretty smart and isn’t under any illusion that things couldn’t turn on a dime. In some ways, I think that Negan should watch out for her [rather than the other way around]. This is somebody who takes any advantage and uses it.

TVLINE | This fight was pretty major — all of our regulars, plus Shiva. What’s the Season 8 war going to be like?
It’s going to be different. They aren’t going to meet in Alexandria every weekend and do that. There are twists and turns to it, definitely some small-scale things and some large-scale things and a whole different momentum to the story. Now that [the various factions] are in public conflict and everything is on the table as far as everybody knows who everybody is to each other and what’s going on, the narrative changes a lot. It’s going to become a bit more kinetic and fast-moving, because that’s where the story is going. The content is definitely going to be determining the form.

How did you feel about the Season 7 finale — and Sasha and Abraham’s reunion via new flashbacks? What are you most looking forward to in Season 8? Hit the comments.