Warning: The following contains spoilers for Sunday’s Season 7 finale of The Walking Dead.

In the weeks leading up to Sunday’s Season 7 finale of The Walking Dead, Rick & Co. had acquired everything that they needed to take on the Saviors, from allies (the Hilltop, the Kingdom, the junkyard collective) to weapons (sorry, Oceanside). And, although Alexandria’s leader didn’t know it yet, he also had back in action Carol — an army unto herself. So, were the rebel forces able to defeat the Saviors? Did Negan’s “little birdie” crap all over our heroes’ plans? Did the war even really begin, much less end, during this jumbo episode? Read on and find out.

‘PUNISHMENT IS HOW WE BUILT EVERYTHING WE HAVE’ | As “The First Day of the Rest of Your Life” began, Sasha, more or less in darkness, seemed to drift off listening to an iPod. In a dream, she was awakened by Abraham, who was “feeling all kinds of glad to see” her. In no time, we realized that this was actually the last conversation that she and her lover had had before his fateful date with Lucille. In reality, she was awakened by Negan. Serving her a breakfast that included smiley-faced blueberry pancakes, he told her, “You are gonna help make sure things get back on track today.” Sure, a few people might have to die, but not her, that was for sure. What was the plan? We didn’t get to hear as he spelled it out to Sasha. But it had to be ugly, as it reduced her to tears. “No one has to die,” she insisted. Miraculously, he negotiated with her, agreeing to only kill one person instead of three. Even he couldn’t believe how she had him wrapped around her little finger — it wasn’t sexual, either. “If you had a dick,” he marveled, “I would still have these feelings.”

‘I WANT NEGAN DEAD’ | In Alexandria, following Dwight’s announcement at the end of “Something They Need” that he wanted to help Team Rick, he was, shall we say, aggressively questioned by our heroes. Rick reasonably suspected that Dwight might just be there to see if Daryl was there. But slowly, Dwight won them over as best he could. Apologizing for Denise — and all that he’d done — he explained, “What I did, I was doing for someone else. She got away.” She was why he was there — she was also, he noted, why Daryl was there. And Dwight did have useful intel: Negan was coming to Alexandria the following day with three trucks full of men. Dwight could down some trees to slow them up and buy Alexandria some time to prepare. Once they’d taken out those Saviors, Dwight could radio back to the Sanctuary that everything was A-OK and sneak Rick & Co. inside with ease. Though the Alexandrians got on board with the plan, Daryl still intended to kill Dwight when it was all over. 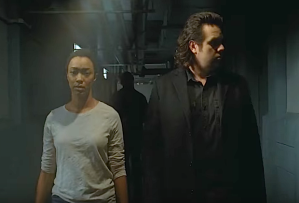 ‘I’M STUCK’ | When Ezekiel, Carol and the Kingdommers happened upon Morgan planning to attack the Saviors solo, the king encouraged him to join them instead. Alas, Morgan felt he was “stuck.” Not even the king pointing out that his confidant was wearing Benjamin’s armor and should honor him rather than serve himself could convince Morgan to get unstuck. (Or so it seemed at that moment.) Over at the Hilltop, in Gregory’s absence, Maggie debated whether or not to lead that group into the battle. At the same time, Jadis arrived in Alexandria with the junkyard collective — in a garbage truck, no less. She was impressed by the place — and apparently Rick, too. After asking Michonne if he was hers, Jadis said, “I lay with him after. You care?” (Sorry, but she cracks me the hell up.) Later, en route to her destiny, Sasha had another recollection — or a continuation of the same one — in which she told Abraham that she’d had a nightmare about him dying. And she really, really didn’t want him to go on that mission to help get Maggie to the Hilltop.

‘COMPLIANCE AND FEALTY ARE YOUR ONLY ESCAPE’ | At last, it was showtime. But all of Alexandria’s preparations appeared to have been for naught. “A test is upon you,” Eugene declared, “and I’m giving out the cheat sheet.” Where was Negan? “I’m Negan,” Eugene said. So what did Rick do? He gave Rosita the signal to set off a bomb. Unfortunately, it didn’t go off. He’d been betrayed. They all had — Jadis was a Judas! She was Negan’s little birdie — made a better deal with him than she had with Rick! (So much for my favorite weirdo.) Next, Negan revealed his plan for Sasha. He had Dwight and Simon remove a coffin from a truck. In it: you know who. What did he want? All of Alexandria’s guns, all of its lemonade, Daryl back, the pool table and a person of Rick’s choosing to get up-close and personal with Lucille instead of Sasha.

‘IT’S ALWAYS FOR SOMEONE ELSE’ | When Rick asked to see Sasha, she was pulled out of her memories of that last talk with Abraham… their last kiss, no less. “Both of us know,” her late boyfriend told her, “if we’re gonna kick, there better be a point to it.” Him helping Maggie… that was a point. “She’s carrying the future,” he noted. Next, we flashed back to Eugene offering Sasha the iPod she’d been listening to, and her informing him that she wasn’t giving up on him. “I know how tough this is,” Negan told her as she volunteered to ride in the coffin when she didn’t have to, “and I appreciate it.” Mind you, she had a good reason for wanting to ride in the casket. She intended to — and did — take the poison Eugene gave her in order to have turned when she was let out of the box!

‘THIS IS JUST GONNA MAKE YOU SAD’ | When Negan opened the coffin, a walkerfied Sasha emerged, allowing the Alexandrians to take aim at the Saviors. Though Rick desperately tried to broker a new deal with Jadis as bullets whizzed around them, she instead shot him and knocked him off their perch. Rosita took a hit, too, Michonne was badly — badly! — beaten, and Negan was nearly bitten by Sasha. (Sadly, only “nearly.”) When the smoke began to clear, Negan had Rick and Carl on their knees when they heard a scream that they feared was the end of Michonne. Next, Negan told Rick he was going to kill Carl in one swing. Rather than cower, Rick reiterated his original threat to Negan — he was going to kill him. Just as Negan went to strike out Carl, Ezekiel, Carol, Morgan, Shiva and the Kingdom attacked! “Alexandria will not fall,” cried the king, “not on this day!” 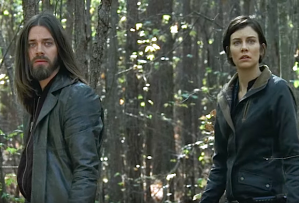 ‘GLENN MADE THE DECISION, RICK; I WAS JUST FOLLOWING HIS LEAD’ | Next thing we knew, a very Stranger Things score was playing, Maggie and the Hilltop had joined the fray, the scavengers were scurrying back to their dump, and the Saviors were retreating (giving Alexandria the finger as they did so). Best of all, Rick and Carl found Michonne alive. Not well, but alive. (And on this show, c’mon, that’s a big win.) Back at the Sanctuary, Negan asked Eugene how he reckoned Sasha ended up dead in the coffin. She ran out of air, he speculated. “Maybe,” said Negan, clearly skeptical. “So,” he then told his massive army, “we are going to war.” Obviously, this scuffle was just the opening act — a bloody appetizer course, if you will. As the episode drew to a close, Daryl found a toy soldier (left by Dwight?) with “didn’t know” scrawled on the back, Maggie and Jesus tracked down Sasha to put her out of her undead misery, and Maggie delivered a lovely monologue in voiceover about how her, Rick’s, Daryl’s, everybody’s “family” had actually been formed way back when Glenn had risked his neck for Rick in Atlanta.

What did you think of the Season 7 finale? Grade it in the poll below, then hit the comments.