You know how it is. In a zombie wasteland, allegiances can shift faster than a corpse can turn. So it probably won’t come as a huge shock that, in Sunday’s penultimate Season 7 episode of The Walking Dead, a couple of major characters appeared to be switching teams. Who really was turning their back on their community, and who was just faking? Read on…

‘IF I WANT GREENERY, I EAT A SALAD’ | Let’s start our recap at the Hilltop, why don’t we? After observing Maggie’s leadership skills in action, Gregory did the unthinkable (for a coward like him, anyway) and followed her when she went outside the walls of the community to dig up a bush. At first, it seemed like he was looking for a fight. Why was she still there, he asked, since her ob/gyn was gone? You said you were gonna bring Carson back, she pointed out. Or was that B.S.? Caught in a lie, Gregory changed tactics, insisting that he wanted them to present a united front to the Hilltoppers.  Maggie did him one better, suggesting that instead they be a united front. “It’s never too late to change,” she added. To give him a chance to do exactly that, she asked him to keep watch for walkers while she finished her gardening. Big mistake. The sleazebag started off by contemplating whether he could murder Glenn’s widow while her back was turned. Then he swore he could handle the approaching walker — he’d killed loads of ’em, doncha know? — which, of course, was another lie. While the mom-to-be dispatched the zombie, Gregory was attacked by another one, leading to Maggie saving him… just as some Hilltoppers were passing by. He hasn’t killed one before; he’s learning, Maggie called out, trying to be helpful. But it was not helpful. “That’s not what he told us!” one of the guys yelled back. Later, Gregory calmed his nerves with tequila and told Kal he needed a ride — presumably to rat out Maggie to Simon. 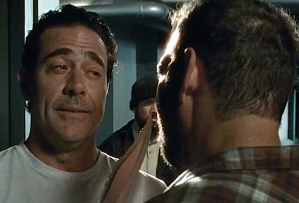 ‘TELL ME HOW THIRSTY YOU ARE’ | At the Sanctuary, Sasha was paid a visit in solitary by creepy David, who offered her water, which he wasn’t supposed to, if she’d do something for him that she wasn’t supposed to. When she rejected his advances with a head butt and a “Go to hell,” he was about to rape her when Negan interrupted. Now, there are precious few scenarios in which the villain’s arrival on the scene is a good thing, but this was one. He stopped the assault and reminded David that rape was against the rules… by putting a knife through his neck. Shortly, Negan recognized his new captive as having been present the night Lucille struck out Abraham and Glenn, and understood why she’d broken into the stronghold. He was even impressed by her “beach-ball-sized lady nuts.” Had Rick put her up to the attack? “Rick?” she replied. “Your bitch?” (Good acting, Sasha!) Taking that as a no, Negan gave the prisoner the knife and a choice — try to use it on him (which would only get her killed), use it to kill herself (a crying shame) or use it to keep David from reanimating and “join the cause.” Later, when Eugene brought Sasha bedding, she still hadn’t stabbed David in the brain, so he attempted to sell her on the idea that teaming up with the Saviors was “the correct select.” Abraham would want her to, he added, then corrected himself, admitting that no, his brave friend wouldn’t want that. “I do.” Her response, just before David turned: “Go.” 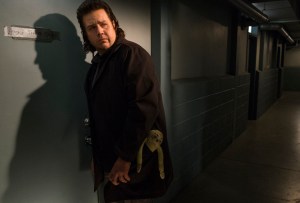 When next we joined Sasha in solitary, Negan was pleased to see that she was still alive, and David’s corpse had a knife in its forehead — a signal that she was switching teams. Still, he wasn’t going to let her keep the weapon. “Baby steps,” he said. First, she’d have to prove herself, and he knew just the way. “A little birdie” had told him that Rick & Co. were plotting something, so his new recruit was going to help him change that and turn the sitch into a win/win. Horrified by the position she was in, Sasha later pleaded with Eugene to bring her a knife, a gun, a razor… anything. “I have to die,” she sobbed. “It’s the only way” to keep herself from being used to hurt her — their — friends. But here’s the great part of this: When we saw Sasha’s expression on the other side of the cell door, we saw quite plainly that she was playing the hell out of him! Unfortunately, when he returned after a while to grant her request, the means of killing that he brought was… crap! Poison. So Sasha was crushed. That wasn’t going to help her do away with Negan, escape or anything.

‘I DIDN’T HAVE A CHOICE’ | Finally, a big group from Alexandria set off for Oceanside, planning to take the women’s guns the easy way — if Tara could convince them to team up — or, if need be, the hard way — but still hopefully without any bloodshed. Along for the ride for a change was Eric, who’d decided it was better to fight than see Aaron get randomly beaten up every so often. “And being with you,” he added, “well… it makes abject terror tolerable.” Unfortunately, even with Cyndie’s help, Tara wasn’t able to convince Natania to talk to Rick in time to give the signal to stop the siege. As explosions went off outside the perimeter of the community — Team Alexandria making its move — Natania got the drop on Tara, who then revealed that her gun had been empty the whole time. “No one needs to get hurt,” Rick insisted when Natania approached with Tara at (loaded) gunpoint. “Walk away,” Natania replied, “or this one dies.” During the stalemate, Tara yelled up to sniper Michonne not to shoot her captor, and Cyndie blurted out to the crowd that the Alexandrians wanted to fight the Saviors. “Maybe we should try,” said Beatrice. But Natania was adamant. She was so scarred by their past losses that she’d do anything to prevent a rematch with the Saviors — even murder Tara and get killed herself. Luckily (?), before anyone pulled a trigger, Michonne spotted walkers, Cyndie K.O.’d her grandmother, and Rick and Beatrice leapt into action, leading the others safely to victory over the undead party crashers. 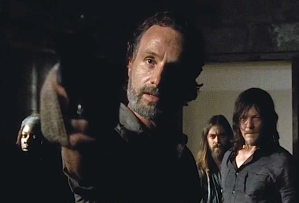 Afterwards, when Rick and Beatrice shook hands, Natania knew that she had lost the battle — “Take your damn guns and go” — but still refused to give up the war — Oceanside would not join the fight. As the Alexandrians were departing, Cyndie told Tara that some of the women wanted to go with them and take on the Saviors but couldn’t because it had to be all of them or none of them. In turn, Tara thanked her for saving her life (again and again), and Cyndie thanked her for “what you’re doing,” risking life and limb to defeat a soulless enemy. Upon the group’s return to Alexandria, it was Rosita who opened the gate for them. Not really addressing the issue of where Sasha was, Rosita escorted them down to the prison cell, where Dwight was being held. (So that was Dwight last week. When I saw Daryl with his crossbow in this episode, I second-guessed myself.) After Daryl was restrained from tearing off his tormentor’s head, Rosita revealed that Dwight insisted he wanted to help them. “OK,” said Rick, leveling his gun at the (former?) Savior. “Get on your knees.”

So, what did you think of “Something They Need”? Who do you think — and hope — won’t survive the finale? Hit the comments.