Warning: The following contains spoilers for Sunday’s Season 7 finale of The Walking Dead. If you’ve yet to watch, you may want to put off reading.

There are worse ways to get killed off of The Walking Dead. In Sunday’s Season 7 finale of the AMC drama, Sasha went out a hero, taking advantage of her ride in a coffin to poison herself in a last-ditch attempt to complete the mission on which she and Rosita had embarked back in “The Other Side.” Here, Sonequa Martin-Green discusses with TVLine her feelings about her character’s demise, getting to work one last time with on-screen love interest Michael Cudlitz and the downside of being cast on Star Trek: Discovery.

TVLINE | Let’s start at the beginning of the end. How did you find out Sasha’s days were numbered?
Well, I found out from Scott [Gimple, TWD’s showunner]. He was gracious enough to let me in on his plan, and I really appreciated that. I didn’t know exactly how it was going to happen until a little bit before we shot the finale, but I knew ahead of time that it was coming. [Once I learned the plan,] I was in full support of it, because I thought it was a beautiful story.

TVLINE | Nice to be able to leave satisfied with your exit.
More than satisfied — I was elated. I was honored. I was touched beyond measure by the way that they played out my life as Sasha. It felt like a period at the end of a really beautiful poem.

TVLINE | Were you bummed that word of your casting on Star Trek: Discovery leaked, since it hinted to Walking Dead fans that Sasha was a goner?
It was definitely a shock. We were expecting the news to come out after the finale. But I’m happy now that everyone knows what’s happening and we can talk about it openly. I’m also really happy with how the timing with everything worked out, because I didn’t know about [my being cast on] Star Trek until the Walking Dead finale was well underway. I know that some people thought that perhaps I left Walking Dead because of Star Trek, but it certainly didn’t happen that way. Star Trek wasn’t even in the sphere at all for a long time, so it’s really amazing that I was able to leave such a powerful show and go to another — one Goliath after another, from legacy to legacy. It’s just miraculous. 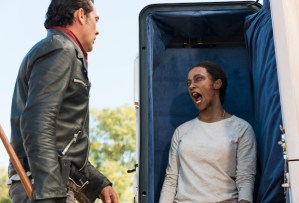 TVLINE | How was your experience playing a walker? It seems like it would be strangely freeing.
That’s a good way to put it. I mean, it’s a primal thing [being a walker], isn’t it? It’s not like you’re a critical thinker. I just let go and committed wholeheartedly. I was surprised at how much fun I had, actually. [Laughs] I had a blast with it! And the special-effects guys are awesome. Kevin Wasner, who did the look, is supremely talented. He and the whole team made the experience a memorable one.

TVLINE | And, as far as The Walking Dead goes, at that point, you’d done it all.
Absolutely! It’s like there really wasn’t anything I didn’t touch while I was there.

TVLINE | What was it like getting to work with Michael again?
It was incredible. He and I found out we were going to be doing [those scenes] together, and we felt as if we’d been given a gift, because we thought we’d never, ever, ever be able to work together again on that show in that story. So to be able to have that [opportunity] was just sensational.

TVLINE | It was also a nice window that we didn’t always get into Sasha and Abraham’s relationship.
Yeah, I loved being able to be a fly on the wall and see what these two people meant to each other, how they helped each other rise up… It was beautifully written. When he got to say, “We’re not gonna be afraid of losing each other anymore; what we’re doing is so much bigger,” he almost [encapsulated] the entire show, where everybody was, at that point.

What did you think of Sasha’s swan song, TWD fans? Her memories of Abraham? Will you be following Martin-Green into outer space? Hit the comments.