Well, would you look at that: The road to hell really is paved with good intentions.

The Sleepy Hollow season finale on Friday finds Ichabod offering Satan a lien on his soul in exchange for The Philosopher’s Stone, which the Witnesses use to revoke Malcolm Dreyfuss’ immortality long enough to wound him. Then, thanks to a ticked-off Jobe — who doesn’t like hearing that he’d be nothing more than Lara’s babysitter in Dreyfuss’ dystopian future — the demon henchman grabs his former boss and immolates him or transports him to another dimension or something equally horrible.

Long story short, Dreyfuss is a threat to the Witnesses no longer. And for that, they have Henry to thank (kinda).

During an attack, Crane gets his son — aka the Horseman of War — alone long enough to point out that Malcolm isn’t his equal: He’s his master. And Moloch’s former whipping boy does not like that one bit. “We both value freedom above all else,” Ichabod says, asking if Henry’s vengeance is worth swearing fealty to a tyrant. And though the former sin eater says he’ll never forgive his father, he stands down: “Even in war, there can be a truce.”

So Diana, Ichabod, Lara, Jenny, Alex and Jake free the president of the United States, whom Dreyfuss had kidnapped and threatened to kill, and are slightly taken aback when she says they should continue Agency 355 and report directly to her. And when Ichabod points out that he’s not an American citizen, she makes him one on the spot. 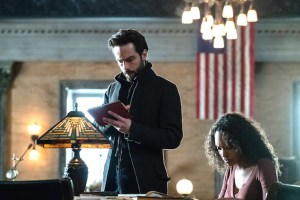 By the end of the episode, Molly is no longer a Witness: The mantle of responsibility has passed to Lara, who goes off for a while to explore this new reality. And Diana is incensed when she learns about the bargain Ichabod struck, but he’s sanguine about the whole situation.

“This? I’ll fix this,” he says, gesturing to the fiery pentagram burned into his forearm. “No, we will fix this together,” she responds. Then they go to figure out how to subdue a kraken as AC/DC’s “Highway to Hell” plays in the background.

We asked Sleepy executive producer M. Raven Metzner, who also wrote the episode, to break down what it might mean for next season (if the still-unrenewed series gets one). Our discussion included courtly bows, unexpected smooches and various other areas of Sleepy interest, including:

HENRY’S CHOICE | “While Henry might be angry, he would choose freedom over tyranny, which again is very true to his character over the past few seasons,” Metzner says. (After all, he killed Moloch, remember?) And The Warlock Formerly Known as Jeremy’s decision not to off his father “does leave their relationship open” and presents an opportunity for future returns from John Noble, the EP points out.

A MAN IN FULL | Giving Crane a win was crucial to Metzner as he worked on the script, he says. “I really wanted to see Crane successful after having been put through the ringer,” the EP adds. “His son, his wife, his best friend and partner. He’s lost so much.”

ADDING THE ICHABOD TOUCH | Metzner says star Tom Mison added a few touches to the episode, during the speech at The Vault (“He came in that day and said, ‘Hey, do you mind if I throw in this extra little bit here? He put in this line of poetry that is just so beautiful and so heartfelt.”) and in Crane’s farewell to Lara (“He ran out to me in the middle of shooting and said, ‘I think I want to bow.’ I didn’t want to ask. Tom’s very careful about who Crane bows to, and when.”).

A JOB FOR JENNY? | The EP reveals that a line that more clearly cemented Jenny’s future with Agency 355 was cut from the president’s final scene. “I think it was a good choice to leave that a little more up in the air.” 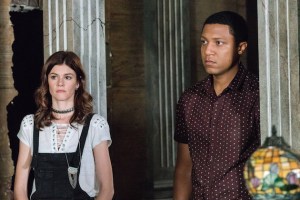 KISS THE GIRL | Alex and Jake’s romance hit a high point in the finale, Metzner says, because “we want to be a show where people kiss each other.” But in the script, Jake is supposed to smooch Alex… though the episode’s director told Rachel Melvin to plant one on co-star Jerry MacKinnon first. “Afterwards, Jerry was like, ‘I saw that coming!'” Metzner says, laughing. “We were like, ‘Did you?'”

NO SYMPATHY FOR THIS DEVIL | The Fox drama often closes its season with some version of the Rolling Stones’ “Sympathy for the Devil.” “But this time around, because we actually had the devil, we thought it was a little bit of overkill,” the EP says. Hence the AC/DC tune as the finale goes to credits.

A COURTLY BOW OF HIS OWN | “This season was a real test for us. I think a lot of people thought the show couldn’t live on after the events of the finale of last season,” Metzner says. “I’m just grateful that people gave us a shot. That so many of our fans stayed to give us the chance to see if we could tell a compelling story… I just want everyone to know that we’re really grateful.”

What did you think of the season finale? Grade the episode via the poll below, then hit the comments with your opinions!