If you’re ever waxing nostalgic and wishing you could revisit high school, please allow the characters of 13 Reasons Why to remind you of why that’s a terrible idea — at least in this day and age.

The Netflix series based on Jay Asher’s 2007 young adult novel, which begins streaming Friday, chronicles the events that lead a vibrant girl to commit suicide… then to send her classmates audiocassettes in which she narrates exactly what part her peers played in her death. 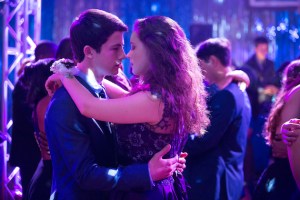 “It’s high school, so you put on a front. Everyone puts on a front,” star Katherine Langford tells TVLine during a Netflix press day in New York. Langford plays Hannah, the aforementioned suicide victim, who takes her own life prior to the start of the first episode. (The series unfolds in dual timelines: pre- and post-Hannah’s death.) “Everyone pretends to be someone they’re not, because they want to fit in.”

The facade Hannah constructs as events start to spiral is good enough to fool her parents (Private Practice‘s Kate Walsh and Smash‘s Brian d’Arcy James) and her classmate/movie theater co-worker Clay (played by Scandal‘s Dylan Minnette), who becomes the de facto executor of her posthumous blame game when he receives the tapes — along with instructions on who to share them with and when — from Katherine after she dies.

What follows is a study in how a community handles guilt and responsibility, wrapped up in a mystery: What, exactly, were the 13 reasons Hannah killed herself? The exploration of these tough ideas is handled with care by people who know them well: These include Brian Yorkey (Broadway’s Next to Normal), who adapted Asher’s book for the series, and pop star/Wizards of Waverly Place grad Selena Gomez, an anti-bullying advocate and one of the show’s executive producers. 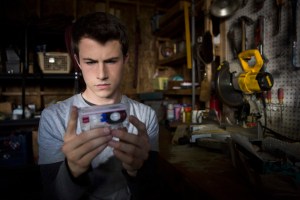 At a February panel discussion for the series, Gomez said she once planned to play Hannah in the adaptation but aged out of the part during the project’s long development. In addition, she was in treatment for emotional issues during most of the shooting. “I’m just glad I still got to watch it happen,” she added.

Gomez was on set for the shooting of the final episode. “She was saying hello to everyone, being super polite and giving us our space,” Langford remembers. “Then when we wrapped, I just remember her coming up to me and giving me the biggest hug. I’m like, ‘I’m so glad I get to meet you.'” The actress smiles. “She was amazing.”

Gomez “really cares so much about this project,” Minnette adds. “She’s been working this for years, and then to have this finally pieced together is a real achievement for her. It’s infectious, her love for it. It really spread.”

Private Practice‘s Walsh got involved, in part, thanks to Spotlight director Tom McCarthy, who also directed a few episodes of the Netflix drama. She told TVLine she was attracted to the part because “she’s not a bad mom. She’s a regular, average mother and Brian d’Arcy James, who’s amazing, plays my husband. We’re good parents. We work really hard so we can give our kid a good life.” Still, “just one thing happens [to Hannah], and her whole life unravels.”

In addition, “not only is it great storytelling,” she said, “but you see all of these issues very organically come up, of LGBTQ issues, race issues, sexual assault, suicide… sexual identity and gender.”

At the panel, Yorkey added, “It’ll be harder for adults to watch the show than for teens… For [the teens], I think it’s gonna feel honest.”