The following story contains spoilers about this week’s Empire. Proceed at your own peril, OK?

Near the conclusion of Wednesday’s episode, Grace Gealey’s Anika was seen high-tailing it out of town after presumably refusing Tariq’s “offer” to book her a mother-daughter suite in witness protection in exchange for tattling on Lucious. Speaking of Anika’s wee little one, Lucious’ missus left Bella with baby daddy Hakeen before bolting — a decision we’re sure she will come to regret.

Elsewhere, Cookie reeled from her violent showdown with Lucious, Tory stabbed Jamal in the back and Nia Long’s mystery woman made a grand entrance.

TVLINE | Perhaps the knowledge that Cookie and Lucious were originally supposed to have sex at the end of last week’s episode is distorting things for me, but it felt like Cookie’s intense disgust and guilt at the beginning of the episode was a bit of an overreaction. I mean, she only kissed Lucious…
Sex isn’t the issue. Betrayal is emotional. It’s much more about what’s in the heart, what you feel and know about yourself. I don’t think it would’ve been worse had Cookie had sex with Lucious. It was where they both went emotionally. There was this undeniable truth that they both confronted when they looked into one another’s eyes. That’s what shook her. It’s not, “Did I chat on Angelo because I had sex with my ex?” 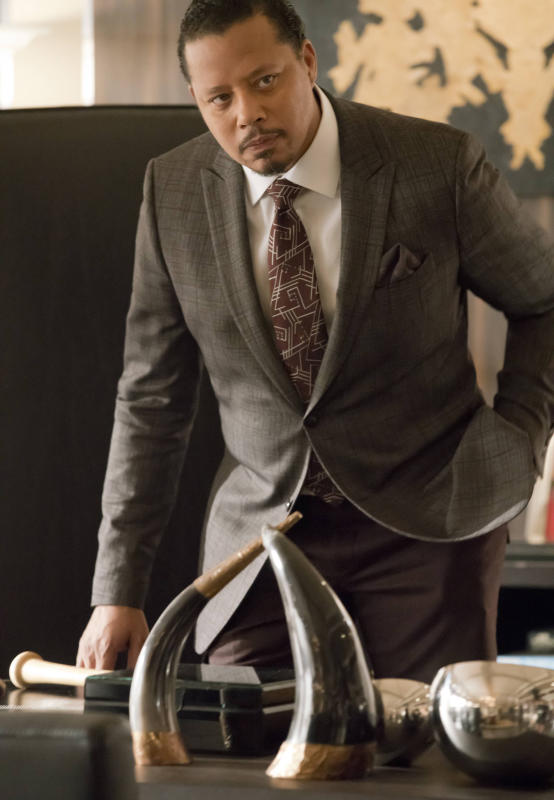 It’s, “Can I erase the last 20 years of my life with this man who has such a hold on me? Can I ever move on and become that other person?”

TVLINE | I was surprised by the restraint Lucious showed when Angelo was coming at him in his office. He could’ve just blabbed to him that he went to first base with Cookie, but he didn’t. Why?
Lucious is always playing a long game. If Lucious showed restraint, it’s because he knew that there was more to gain by keeping [quiet].

TVLINE | I really liked the Becky-Anika scene. It’s nice when we’re reminded that Anika is a multi-dimensional character and more than just Cookie’s nemesis. Is that a tricky line to walk though?
Yes. It’s a balancing act. In our minds she is a nuanced character, but we only have 42 minutes with this large ensemble cast, and sometimes it’s hard to find the time to portray those nuances. So we seize those opportunities when we can. Anika has always been very real to us. We never wanted to make her into a cookie-cutter villain.

TVLINE | At the end of the episode, we see her heading out of town. Is Grace Gealey done with Empire?
Nooo.

TVLINE | Where is she going? I’m guessing she’s not taking public transportation to witness protection…
It’s more complicated than that. Anika is a smart woman who understands the power of the Lyons. There’s an argument to be made that Lucious Lyon is more powerful than the feds. I’m not sure Anika is going to be so quick to put her in the hands of a slightly unhinged federal agent.

TVLINE | Nia Long’s character Gia is introduced at the end of the episode. We’ve seen in the previews that she cozies up to Lucious. What’s the nature of their relationship?
That relationship goes much deeper than we’re initially led to believe. We’re going to find out that maybe there’s a connection between these two individuals that will lead to all kinds of complications, for Cookie in particular. It’s possibly the most consequential relationship of the rest of the season.

TVLINE | Jamal and Phillip hooked up — is there the potential for a real long-term relationship there for Jamal?
There’s certainly the potential for it. Jamal, rather like his mother, is looking to have a healthy relationship. There are so many things standing in the way of that right now.

TVLINE | Why did Tory betray Jamal?
Because Lucious is a motherf—er.