Warning: Read no further until you’ve seen Friday’s Grimm, because there are major spoilers ahead.

Epic battles tend to have heartbreaking casualties, and the shootout that ended this week’s Grimm was no exception: The episode’s final moments saw an attack at the precinct that left two of Portland’s finest — Hank and Wu — dead.

A very brief recap: The skull-face demon known as Zerstörer entered the real world, where he appeared as a strapping, blonde man with a very large, very deadly staff. Realizing that the bad guy was on the search for Diana, his child bride (ick), Nick, Renard and Adalind hid the little girl in the cabin we first saw in the series premiere.

Zerstörer eventually showed up at the police department, where Wu Neander’d out and tried to fight him… only to get a staff through the torso. When Hank saw what happened to his friend, he — and a bunch of other cops — unloaded a ton of firepower on the villain, but it was to no avail: Nick’s partner also received a killing poke.

Yep, it looks like Hank and Wu are dead.

We asked star David Giuntoli to help us make sense of it all. Read on for his thoughts on Nick’s comrades’ deaths, his new understanding with Eve, a tender moment with Adalind and next week’s series finale (“You’re going to see time jumps”).

TVLINE | Let’s talk about that shootout at the end of the episode.
Yeah, everything was destroyed.

TVLINE | What was your first reaction when you read the script?
That wasn’t a particularly long scene so when we shot it, I’m like holy s–t. This is intense. Police shootouts, you don’t think automatic weapons. It kept getting changed, and suddenly we have all automatic weapons. I got excited about it, I was like “Oh, sweet. I never get to do this stuff.”

TVLINE | That scene ends with two significant deaths. Are they permanent?
Oh gosh, I don’t think I can talk about that. [Laughs]

TVLINE | Nick doesn’t seem to be thinking logically after that happens.
All he does is scream and run. In the most cinematic way possible.

TVLINE | In the previous episode, Nick and Eve spend some time in the alternate dimension. How important is it for Nick and Eve — and the fans — for them to have that time together?
I think it’s great. That relationship deserved some discussion and attention as far as, it can’t just go away. I know Bitsie [Tulloch] and I really enjoyed that. The shooting of it was hell. [Laughs] It was like the first snowstorm of Portland’s history, and it shut down the city. It was freezing out there. But we were really satisfied with at least getting a touch on that relationship and the fallout, and to give a little bit of closure to the fans.

TVLINE | Do you think Nick needed to hear Eve say that she doesn’t regret anything that happened?
Oh my god, yeah. That is a huge help… Yeah, he needed to hear it. I think that it’s always on his mind, the fact that he indeed was warned by his Aunt Marie in the pilot and his mother from the get-go when she was introduced. He was directed to leave these relationships alone, [because] “yours is a different destiny. The people you love will be in harm’s way…” Anytime one of his Scooby gang stepped up and helped him, they paid a tremendous consequence — and Juliet paid the greatest. Took the biggest hit. And her telling him that it’s all OK and it’s not your fault and I wouldn’t change things? It was wonderful for him to hear that. 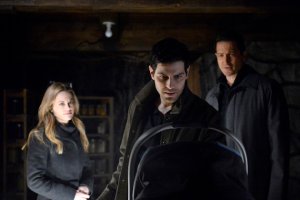 TVLINE | Is it weird that it’s Diana — and not Kelly  — who is the person that all the crazies are going after?
It does strike me, but then you’ve never worked with a baby. That question is quickly answered for you because they are cute, [but] they don’t take direction. They cry when they’re not supposed to. [Laughs] So I think there were practical reasons for Hannah [R. Loyd] to play Diana [as the focus of Zerstörer’s hunt]. She was quite a find. She’s gorgeous, first of all, and a wonderful actor, especially at her age. And she’s got this wonderful — and the fans see it right away, even if you don’t know it — these like eyes and this stillness, which hints at a lot of trouble and a lot of power.

TVLINE | The scene with Adalind and Nick right before he leaves the cabin: They’ve kissed and said “I love yous” before, but this time seemed to be the first time that Nick truly meant it. Was it?
Yep, I think that that is the first time. He doesn’t know if he’s going to live, and she needs to know this. She’s proved her salt.

TVLINE | Moving on to the finale, is Nick thinking at all right after Hank and Wu die? Or is he running on pure adrenaline?
No, he’s not thinking. When Nick isn’t solely vengeful, those are his best days. And he is solely vengeful in this final episode. There’s nothing strategic going on.

TVLINE | Give me a finale tease.
It ends. There’s no like ‘what happened’ ambiguity. It is fully spelled out for you. People will be happy.

TVLINE | Now give me a tease you haven’t told anyone else.
We play with—this is a tease I haven’t given anyone—the fabric of space-time in a way we have not yet seen. Imagine you’re riding on a ray of light. [Laughs] Yes, we play with time. You’re going to see the future, and you’re going to see time jumps.