Good news, everyone! This week’s Legion cleared up a lot about what’s really going on in David’s head — and also set the stage for a guns-blazing showdown in next week’s finale.

Things look pretty bad at the start: Kerry is still being chased by that creep Walter through the halls of Clockworks, while Lenny interrogates Nurse Amy about the day her family adopted David as a baby. (“What did he do with it?” she demands to know — “it” being a metal X insignia, it looks like.) Meanwhile, Cary’s having a nice time chilling out in Oliver’s ice cube… even though Oliver seems to have no memory of his wife Melanie. (“Is she… for some reason, I want to say… Chinese?” Man, Jemaine Clement is THE BEST, isn’t he?) 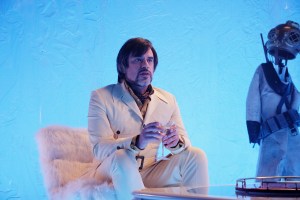 But at least Oliver and Cary are on the same page about David: His mind is being controlled by a parasite. And Oliver finally gives “The Monster” a name: Amahl Farouk, aka the Shadow King, who disguised himself as David’s childhood beagle King (get it?) in his memories. Oliver shows Cary that frozen moment where David is about to be shot (let’s call it “the Gunshot reality”), and they hatch a plan to put Cary’s makeshift halo on David’s head to separate him from the parasite and end this hospital fantasy. “We’re going to need everybody,” Oliver says.

So Cary wakes up a sleeping Syd and leads her to a red-framed glass case where the Monster can’t hear them. He tells her the hospital isn’t real; “No s—t,” she replies. She’s way ahead of him, and says she’ll handle Lenny and the hospital while he works on saving David. To make her job easier, Cary hands her several pairs of magical eyeglasses from Oliver: “They’ll show you what’s real, and what isn’t.”

And sure enough, when she gets back to the hospital, it looks like a war zone, with sirens going off and patients crawling around like zombies. But when she puts those glasses on… the chaos disappears. She finds wheelchair-bound drooler Rudy and Kerry, who’s now running from zombies, and puts glasses on them both, assembling her team. Back in the Gunshot reality, Cary grabs the halo out of his old self’s hand. But what’s happening with the man all this is swirling around? Where’s David?

Well, he’s still trapped in that coffin from last week. “A mental coffin,” he tells himself, but it’s still a coffin. But a friend appears: another David, this one with a British accent. He says he’s David’s rational mind, here to help him get out of this before the Monster takes full control of him. He gets David out of the coffin and takes him to school, literally, putting him in front of a blackboard and walking him through what he’s learned so far.

David grabs a piece of chalk, and as he draws, we get a much-needed animated primer on what the hell’s going on: David knows he was adopted, and the Monster is a parasite that’s been with him since he was a child. He theorizes that his real father was a mutant who battled the Monster and won, but the Monster’s evil essence lived on. David’s father gave him away to hide him from the Monster, but the Monster still found him and possessed him, leading to David’s suicide attempt: “He poisoned me my whole life.” But Syd’s love woke him up, and now he’s ready to fight: “I’m gonna get my body back.”

That leads to one of those fantastic Legion montages: With Ravel’s “Bolero” blaring, Oliver waves his arms in the Gunshot reality, summoning a swirl of letters that form a protective barrier around David and Syd. While a newly energized David stomps through his old memories, Syd, Kerry and Rudy are confronted by a vengeful Lenny in the hospital. The scene turns into a silent movie, with dialogue written on title cards, as Lenny calls off Walter, using her powers to violently crumple his body into a compact ball. (Walter’s face in the Gunshot reality starts to gush blood, too.)

Lenny sees a vision of Oliver in the Gunshot reality and zaps there to shove him into a wall, so his barrier of letters disintegrates. Then she zaps back to the hospital to finish off Syd and the others — but David’s show of mutant force wakes up Rudy, who leaps up and tackles Lenny, hurling them both down the hallway. Cary puts the halo on David’s head in the Gunshot reality, and he unfreezes long enough to put his body in front of Syd’s… just as the bullets hit him. But don’t worry: He’s a super-powerful mutant! He opens his hand, where he’s holding the bullets, and lets them drop harmlessly to the floor. He’s back, baby!

David, still wearing the halo, and the Summerland gang carry Rudy back through the woods on a stretcher. Back at headquarters, Oliver is out of his deep freeze and serving up eggs in the cafeteria. Everything seems great! Except an army of Division 3 soldiers stream in, holding them all at gunpoint. The interrogator from the pilot appears, half of his face disfigured by the pool explosion. “We have so much to talk about,” he tells David, and instructs the soldiers: “You can kill the others.”

But he doesn’t know who he’s messing with: David sinks into his subconscious, where Lenny/the Monster is trapped inside that coffin, banging away… until a crack emerges.

* Amahl Farouk/the Shadow King is a significant figure in the comics: He’s a malicious entity of evil energy and a longtime nemesis of Professor Xavier. In fact, Xavier’s first battle with Farouk inspired him to form the X-Men. So that name is a hint we’ll be delving further in Marvel comic-book lore… and maybe seeing Professor X in the flesh at some point.

* Even before Division 3 arrived, not everything was peachy-keen at Summerland: Kerry was mad at Cary for abandoning her at the hospital (“You left me. I needed you, and you left me”) and declined to reenter his body. Don’t tell me these two are — gasp — splitting up?

* So about that X insignia: Was that some sort of memento David’s real dad left with him to prove his mutant heritage?

* I’m happy the Summerland gang fought their way out of that hospital, but I hope it doesn’t mean we’ve seen the last of Aubrey Plaza… although more Jemaine Clement is admittedly a nice trade-off.