Syd’s meds are starting to wear off… or are they just kicking in?

Lenny’s in therapist mode, treating each of the characters we’ve come to know. Melanie is twitchy and awkward, and Lenny thinks she made up this “Frozen Man” idea to cope with her husband’s death. Ptonomy is haunted by memories of his mom dying: “I like to think I’m a time traveler… but all I can do is watch.” Cary and Kerry have an “unhealthy” attachment to one another. Walter is full of rage and hostility after being the last boy to go through puberty.

Her session with Syd, though, goes a little differently. Lenny tries to focus on how Syd isolates herself, but Syd is distracted: “Something’s wrong.” She feels like she’s stuck in a dream, but not even an interesting one. Lenny interrupts her to say it’s time for her meds, but while walking back, Syd looks down the hall… and sees a strange wooden door there she’s never seen before.

Before she can open it, though, she’s called away to the nurse’s station, where David’s sister Amy — a nurse in this reality, and not a nice one — roughly feels her up looking for “contraband.” Syd tries to tell David and Ptonomy about the door, but Lenny interrupts (again!) to take David in for his session. He’s actually doing well: reading, painting, doing yoga. “The world is starting to make sense,” he tells Lenny, and he credits that to his new romance with Syd. 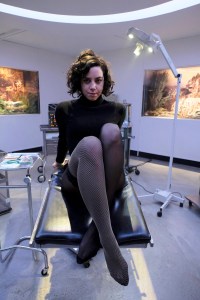 He’s even overjoyed that it’s pie day in the cafeteria… but Amy cruelly snatches his pie away and eats it herself. And when Syd starts to eat her pie, she screams and throws it on the ground; it’s covered with bugs. That kicks off an extended dance sequence set to Nina Simone’s “Feelin’ Good,” with Lenny mischievously vamping through David’s memories — his old kitchen, the Summerland lab — before reentering the hospital through that wooden door and calmly getting back to work. Syd’s right: Something’s definitely wrong here.

In her dreams, Syd has visions of that redshirt firing bullets at David from last week, along with the Devil With the Yellow Eyes. She tells David she wants to escape Clockworks, but he’s content to stay there with her forever: “Maybe they’ll give us our own room.” And she’s not the only one having strange visions: Cary dreams of a giant green glowing iceberg floating above him, then finds himself in that astral plane with the guy in the old diving suit. He asks the diver to take him to the “ice cube” Cary’s been dreaming of, and follows him there.

David and Syd, meanwhile, are still having issues. She brings up the door again — which has suddenly vanished — and David tells her to be careful, or else they might up her meds. He reminds her she’s in the hospital for delusional thinking, not touch aversion, like she believes. And he’s actually manic-depressive, not schizophrenic. In the hallway, Syd has a vision of Lenny’s dead body stuck in the wall, and she seems on the verge of figuring out what’s going on… when Lenny appears and suggests “music therapy,” plopping headphones onto Syd’s ears. The sound of crickets soothes Syd, and she drifts off to sleep.

But Syd’s words send David into the hall for some exploring, where he finds the wooden door — only Nurse Amy interrupts to tell him how no one likes him, retching violently to make her point. Then Lenny sweeps David into a late-night session; she’s concerned about his relationship with Syd. She tells him about a brain fungus that affects ants, controlling their mind and shooting up through their skull, ultimately killing them: “When people say love, that’s what I think of.” 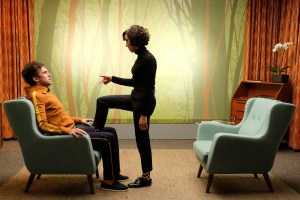 She doesn’t get love, or babies, or any of it, she tells David. God is the only thing that matters to her: “You know why God matters? Power.” And she puts her shoe firmly on David’s crotch to demonstrate that power. Then Lenny casually brings up David’s real father, the “a–hole” who acted holier-than-thou but abandoned his own son: “He thought he could hide you from me… but he was wrong. I found you.” She calls herself a “walking, talking fungus” while straddling David, and her voice takes on a scary low pitch: She’s suddenly the Devil With the Yellow Eyes.

Lenny tells David he’s much more powerful than she thought; she had planned to just kill him, but now she thinks their powers together “could give God a run for his money.” A terrified David asks what happened to Syd, but she ignores him, writhing on him like a stripper giving a lapdance. She only needs his body, she says: “I could give a s–t about your mind.” Then he’s zapped away, isolated in a gold coffin-like box while faceless voices mock him, calling him a loser.

So what did happen to Syd? She’s still in her cricket-sound reverie when she’s awakened by someone taking off her headphones. It’s the man in the diving suit — who opens his mask to reveal: It’s Cary! He beckons for her to follow him. Has he found a way out of this bad dream once and for all?

* Comic-book fans know that David’s real father is actually Professor X, the wheelchair-bound leader of the X-Men. So does Lenny’s little hint mean David will be searching for his real father, once we get back to reality? (Assuming we ever do.)

* Kerry had a memorably nasty encounter with Walter, with him cornering her inside a hospital bedroom and menacingly approaching her, asking, “Did you ever eat an animal that’s still living?” (Not the best opening line, to be honest.) That highly creepy character dynamic is worth keeping an eye on.

* Didja notice that Ptonomy and David’s opening conversation about their fellow patient’s string of spittle was exactly the same conversation Lenny and David had in the pilot? What kind of infernal time loop are we stuck in??

* Like Syd, Melanie also zapped back to that moment where David’s about to be shot, and tried to prevent it: first by touching the bullets hanging in midair and burning herself, then by trying and failing to push David and Syd out of the way. Thinking she’ll probably intersect with Syd and Cary on that astral plane somehow.

* Yay for Legion getting a Season 2 renewal! And just in time, because we only have two episodes left this season — and we’re pretty sure creator Noah Hawley isn’t planning to wrap everything up with a nice, tidy bow. That wouldn’t be Legion, now, would it?