Night 1 of The Voice’s Season 12 Battle Rounds was such a head-scratcher that it’s a wonder I still had a singular Homer Simpson hair left up there by the time it was over. Quizz Swanigan over Felicia Temple? Mark Isaiah over Gaby Borromeo? No steals for Kenny P. or Missy Robertson? We were in Bizarro World territory! Did Night 2 return us to some semblance of, “OK, this computes”? Read on and find out, at least in my estimation…

Team Alicia: Chris Blue defeated RJ Collins on “Adorn” | Now this was a battle! RJ’s vocals were so sweet, they made me want to pour ’em in my coffee like creamer. (To be clear, I mean that as a compliment — they were really delish.) But Chris’ voice seemed to have far greater flexibility — yes, the same flexibility that I previously horrified you by suggesting he’d tried to show off too much of in his short Blind Audition. Here, it served him brilliantly, allowing him to demonstrate in non-rushed fashion not only an enviable falsetto but also a damn sexy growl. Plus, Chris was untouchable as far as stage presence went. (His moves left Gwen “mesmerized” by his body.) You couldn’t take your eyes off him any more than you could your ears.

Team Gwen: Johnny Gates defeated Sammie Zonana on “I Drove All Night” | In rehearsals, mentor Celine Dion was delighted with the duo’s indie-rock take on her hit — and, she was quick to note, Roy Orbison and Cyndi Lauper’s hit before her. But it was sounding a little dodgy to me, like maybe their voices weren’t gelling. (Mind you, that could have been unfair — like judging a cake before the sugar’s added.) On stage… yeah, no. It still sounded a little dodgy. And, as much as I loved Sammie’s husky voice based on her Blind Audition, Johnny’s vocals cut through the noise of the arrangement better on their duet and really stood out. So Gwen, I think wisely, stuck with her “Italian homey.” 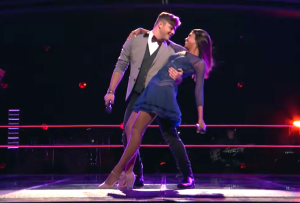 Team Blake: Aliyah Moulden defeated Dawson Coyle on “Walking on Sunshine” (Dawson stolen by Alicia) | The youngsters’ inexperience tripped them up over and over again in rehearsals with mentor Luke Bryan. (Some things even crazy-cute outfits can’t overcome.) By the time they were done, it sounded like they’d found a way to harness the power of their raw voices. But on stage, the song just didn’t suit Dawson’s rocky voice. Aliyah fared far better, though she, too, struggled now and again. And neither of them were well-served by a stab at choreography that made it look like they’d just flubbed an audition for a High School Musical remake.

So, what was your pick for best performance of the night? (Definitely Chris for me, hands down.) Most confounding coach’s decision? (That Alicia stole Dawson.) Hit the comments.