[Bleep] just got real. Monday night kicked off The Voice’s Season 12 Battle Rounds — or, as I think of them, Thunderdome with more key changes. Who managed to survive the spectacle of trying to outsing their teammates/rivals to perform another day, and who was told to exit stage left? Read on…

Team Blake: Lauren Duski defeated Brennley Brown on “Better Man” (Brennley stolen by Gwen) | Birthday girl Brennley poured all the intensity of her 15 years into the Little Big Town hit and really soared whenever she was allowed to let loose with her vocal. But, maybe in part because she’d yet to actually have her heart broken, she couldn’t entirely relate to the angst of the song, so coach Blake preferred the authentic ache that he heard from Lauren, who flashed back to a failed romance to give her vocal a passionate edge. (Also, I will never throw shade at Lauren again — she was terrific, her lower register in particular, a marvel. I get it now. I get it.)

Team Gwen: JChosen defeated Kenny P. on “I Was Made to Love Her” | Kenny absolutely slayed the 1967 classic, bringing a touch of gravel to his soulful vocal and throwing in a song-stopping falsetto to boot. He was so good from the word “go” that I really thought he had the win in the bag. But, after getting off to a rough start in rehearsals with mentor Celine Dion, J had his act 100 percent together and his nerves banished by the time he hit the stage, allowing him to turn in a performance that was a real (Stevie) Wonder. Too bad the guys couldn’t work as a team permanently. They played well together, even incorporating a little dance into the number. 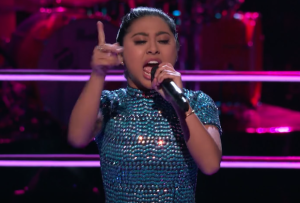 Team Alicia: Anatalia Villaranda defeated Missy Robertson on “Tightrope” | I couldn’t take my eyes off Hurricane Anatalia for the whole performance — she was so entertaining and animated, Adam wondered aloud if she wasn’t really a wind-up toy. But the show is called The Voice, not The Entertainer, and she seemed to struggle vocally at times, whereas Missy was solid throughout the performance, hitting notes that even stunned the coaches. So it was a surprise to me — and maybe you, too? — that not only did Alicia elect to keep Anatalia, nobody stole Missy.

Team Alicia: Quizz Swanigan defeated Felicia Temple on “Titanium” (Felicia stolen by Blake) | In rehearsals with mentor DJ Khaled, Quizz had difficulty hitting his high notes (damn puberty!). However, on the stage, he acquitted himself beautifully, rising to the occasion and singing with impressive force. I still thought it sometimes felt like he was playing catch-up to Felicia, trying to match her power — and there was no matching it — but clearly, Alicia disagreed. Thankfully, Blake knew a good thing when he heard it and swooped in to add Felicia to his team. 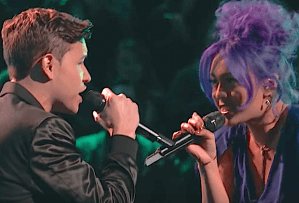 Team Adam: Mark Isaiah defeated Gaby Borromeo on “Pillowtalk” | After being pushed by mentor John Legend to trade some of her sweetness for rawness on the Zayn smash, the violet-haired popster tried to edge up her vocal come performance time. Not sure that it worked — and she was still pretty smiley for somebody being edgy — but I did think that she outsang her teammate, who kinda faded away for me. He’s a good singer with a nice, teen-idol smile. But, if I’d had to choose, I would’ve let her purple reign go on a little longer and let somebody steal Mark.

Team Blake: Casi Joy defeated Ashley Levin on “How Blue” (Ashley stolen by Alicia) | How cool — Blake’s country girls started the Reba classic gorgeously acapella. From there, it seemed like both of them might have been oversinging at times, trying to blow away their coach — and potential coaches — as much as do the song justice. (Not that you could blame ’em — they each wanted to stay in the contest, of course.) After that special something that Casi has proved once again undeniable, Gwen, Alicia and Adam all vied for Ashley, so maybe singing right to the border of oversinging wasn’t such a bad idea.

So, who gave your favorite performance of the night? (For me, Felicia.) Who could you not believe didn’t get stolen? Hit the comments.