Chicago P.D.‘s Halstead and Lindsay are about to face their first major relationship test: the sudden reappearance of his ex (played by Shameless‘ Stephanie Fantauzzi) during this Wednesday’s episode (NBC, 10/9c).

“The ex-girlfriend used to be in the military with [Halstead], so it stirs some stuff up for him and causes some conflict for him and Lindsay,” star Jesse Lee Soffer tells TVLine. (You didn’t think the couple was just going to blissfully cohabitate, did you?)

As it turns out, it’s actually the detective’s emotional baggage, not potentially rekindled feelings for his former flame, that should give “Linstead” ‘shippers cause for concern, Soffer reveals in the following Q&A.

TVLINE | Last season, there was supposed to be a Halstead/Lindsay road-trip episode, exploring their backgrounds, but it was scrapped. Is this week’s episode a make-good on that?
It’s not a make-good on that, because that episode was definitely going to be a fan favorite for the “Linstead” fans… This is going in the other direction. This is definitely stirring some stuff up. The fans might be a little uneasy about it. There’s an ex-girlfriend of Jay’s that comes back in the picture, that wants to reconnect with him. He’s definitely feeling cautious and uncertain about it. She needs his help, and he obliges. It’s fine and harmless. Then it gets a little more confusing for him, and he’s struggling with some stuff from his past.

TVLINE | Even though it’s someone from his romantic past, it sounds like the storyline offers up some insight into his own background as well.
Yeah. There’s still stuff that Jay saw and dealt with [overseas] that he bottled up and maybe didn’t really overcome. We get to see some of that.

TVLINE | Does Jay still have feelings for this woman?
Only in the way that you care about someone that you used to be with. I don’t think that it’s feelings that would put his relationship [with Lindsay] in jeopardy. It’s more that she stirs up feelings and issues that he hasn’t dealt with from when they were together. 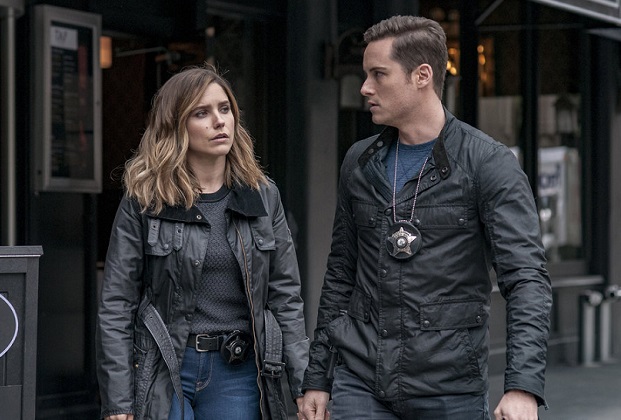 TVLINE | How does Lindsay feel about this person re-entering her boyfriend’s life?
Definitely not great. [Laughs] I think she feels a little threatened at first, and then they have to have a talk about it. But the bigger issue is the stuff that Jay is going through. It’s not even so much about the past relationship. It’s about the baggage that he’s carrying.

TVLINE | Do you think they have what it takes to weather this relationship test?
[Laughs] I don’t know. They have definitely been through a lot together… I don’t know what direction it’s going in.

TVLINE | As Jay is going through this, how does it affect his ability to do the job?
His ability to do the job is never in jeopardy, because he’s been in such awful situations when he was overseas that he’s used to a stressful environment and putting his emotions aside and dealing with whatever the task is at hand. He’s good at that part of his life. He’s not good at the emotional, home part of his life.