This Monday on Supergirl (The CW, 8/7c), secrets and lies prove to be kryptonite to two nascent relationships.

Barely weeks into their star-crossed romance, Kara will discover Mon-El’s connection to a pair of Daxamite newcomers, played by Teri Hatcher (Lois & Clark: The New Adventures of Superman) and Kevin Sorbo (Hercules). Winn, similarly, meanwhile will discover a not-so-little something about Starhavenite girlfriend Lyra.

Can either coupling survive its trust-rattling reveal?

Previewing the bombshell dropped on Kara, Melissa Benoist tells TVLine, “The way she finds out the truth is not the way she would want to find out — and not just because it’s a secret Mon-El (Chris Wood) has kept from her this whole time.” 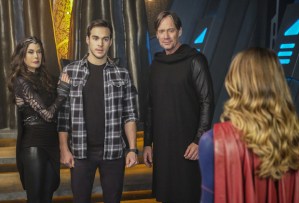 stumbles upon her beau’s sin of omission in perhaps the worst way possible, and as a result, “Tensions are high,” Benoist says. After all, “Daxamites and Kryptonians don’t really get along. Kara and Mon-El found common ground through the kindness in their hearts, but [the new arrivals] are much more set in their ways, so it’s difficult.”

As for how Mon-El’s ties to these nefarious newcomers impacts the special something he finally got going with the Girl of Steel, Benoist warns, “It’s definitely a wrench in the gears.”

Winn, at least, is in the midst of an adventurous tryst with his own sweetheart-from-outer space when he comes to realize that Lyra has been keeping something from him as well. “Winn is feeling very deceived by Lyra, somebody he’s put his full trust in and fallen very fast and very hard for,” Jeremy Jordan shares, adding: 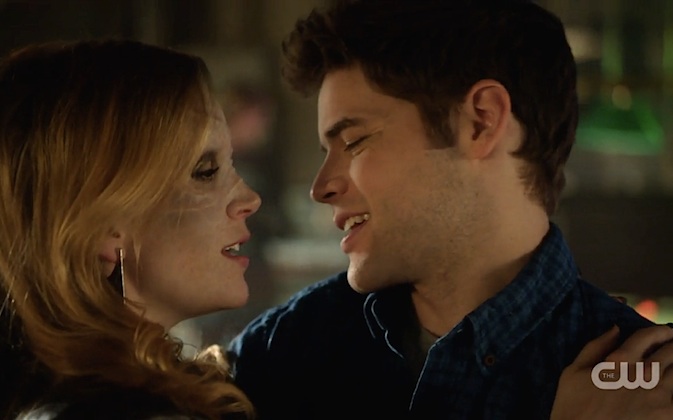 “It goes down a pretty dark path. Winn and Lyra’s future is definitely up in the air after this big deception.”

If there’s any silver lining, Jordan points out, “I get a couple really fun scenes with Floriana [Lima],” as Maggie does her best — though it may not be good enough — to keep Alex’s DEO colleague from doing time for Lyra’s unexpected crime.

As their respective romances threat to get derailed, might Kara and Winn find cause to “compare notes”? “There is a really nice connection between Winn and Kara in the episode,” Jordan says, “which we don’t see a lot of anymore, after the whole thing happened last year with Winn kissing her and telling her how he really felt. Their friendship survived, but inevitably changed. “But by the end of the episode, they do have something to really connect with — this idea of being betrayed and double-crossed.”

Surveying the two friends’ respective evolution over a season-and-a-half, he says, “Winn’s grown up a lot. He went from this goofy, kind of scatterbrained, scared kid to someone who has a lot of confidence and has become much more grounded — a source of humanity for a lot of our characters who need a reality check.” Kara meanwhile “has in a sense grown more wary, from a wide-eyed kind of girl to a hardened crime-fighter. We’ll see how Winn and Kara handle their situations very differently” — before, of course, things take a musical turn, and this week’s crossover with The Flash gets underway. (Additional reporting by Vlada Gelman)