Hey, Grimm‘s Baby Kelly. Yeah, you. Don’t look at me with that cute little face like you don’t know what I’m gonna say.

You’ve had quite a cushy set-up this last year or so, with Adalind and Nick carting you around Portland, giving you front-row access to some of the craziest magic in the Pacific Northwest. And while most people wouldn’t have the stones to tell a baby what’s what, I’ve got some news for you:

It’s time to step the heck up. Earn your keep. DO SOMETHING.

We’ve got three episodes left in Grimm‘s final season — the NBC series finale airs Friday, March 31, at 8/7c — and you have yet to cast a spell. Or obliterate an enemy. Or do anything at all, really. And for the life of me I can’t figure out why the offspring of a Hexenbiest and a Grimm is proving to be nothing more than a cherubic face in a wet diaper.

Hey, hey! Don’t act all innocent. Look at me when I’m talking to you! Look at me! Look… [Covers hands with face] Peekaboo! Peekaboo! Good. That’s better.

I mean, I know it’s not great to compare children, but Diana did more in the womb than you’ve done all year. You weren’t around when your sister came into the world, so allow me a moment to recap her first moments on Earth: She was born under duress, in a cabin in the middle of nowhere, yet she still managed to scare Meisner when she thought he was a threat to Adalind. And he was freaked. Meisner! The guy spent more time grooming his facial hair than fearing Wesen, but you’d better believe he backed off after Diana flashed him those violet peepers. 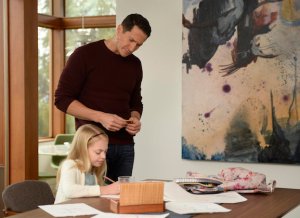 And the petite powerhouse continues to get stuff done. While I’m in no way condoning her murder of both Bonaparte and campaign-manager Rachel last season, you’ve gotta admit: She did both with style. What do you expect from someone who was astral projecting before she could eat solid food? She can read that weird map. She figured out that Juliette was in the wall. As recently as a few episodes ago, Diana got kidnapped by some bad guys, and you know what her daddy did? He sat down and calmly ate cookies, so sure was he that his little honey badger could take care of herself. And she DID.

All I’m saying is that with Scarymirror McSkullface hanging around and that prophecy/star map/whatever it is hinting at some major doom ahead, it seems like the Scooby Gang is going to need all hands on deck as the our time in Portland winds to a close.

OK, you seem more impressed with that Sophie giraffe teether than with what I’m saying, so let me leave you with this chilling prediction: Rosalee and Monroe are going to have their kids soon, and you know what’s cuter/potentially more powerful than one magically infused baby? THREE MAGICALLY INFUSED BABIES. With those parents, you just know the triplets are going to come out of the womb lecturing on the inner workings of some mystical timekeeper and grinding up an obscure potion that’s destined to save the day. And where will that leave you?