It turned out that Grey’s Anatomy didn’t just reunite Jackson with his long-lost father in “Who Is He (And What Is He to You)?” While in Montana with April to perform a throat transplant on a young patient, he not only confronted his dad (Eric Roberts — surprise!), he also hit the sheets with his former wife. Here, Sarah Drew, who plays Kepner, reflects on the ABC drama’s atypical handling of the hookup — and what it could mean going forward — and marvels at Roberts’ ability to play “kind of a jerk but not a jerk at the same time.”

TVLINE | Were you surprised that Jackson and April slept together?
[Laughs] Yes! But not totally surprised. They’re still so connected to one another, especially now that they have a child together and are roommates. And she really showed up for him in this episode in a way that I don’t thinks she has in their entire relationship so far. I really love that their dynamic in this episode is that she sort of walks beside him and gives him space while he’s wrestling with all of this. She doesn’t need anything from him, she’s not asking anything of him, she’s literally just being present, listening to him, letting him hash this thing out in a way that he needs to.

TVLINE | Which says a lot about how well she knows him.
Right. That can only be earned through people who are each other’s person. That’s really satisfying. You get to see how much love there still is there, you get to see how deep their friendship is and honestly, how much they need each other. And I like that it’s done in a way that isn’t typical. It isn’t super-romanticized. It’s just her really showing up for him, and that closeness, him being supported in such a profound way in such a profound moment, walks them straight into the bedroom together! There are still issues, of course, but in this moment away from their normal lives, she shows up for him, they want to connect, and they let themselves do that. 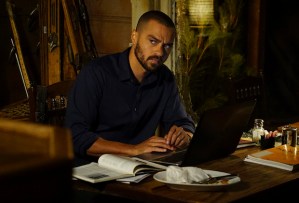 TVLINE | Was it hard to keep the secret that Eric Roberts was playing Jackson’s father?
[Laughs] Yes! And he was so phenomenal! Both he and Jesse [Williams] did really, really exceptional work in this episode.

TVLINE | Was he what you imagined when you pictured Jackson’s dad?
I guess I didn’t know what to expect, but once I saw him in action, I was like, “This guy is so perfect!” There’s a charm to him, and you understand why he wound up where he wound up — in this bar having abandoned his family. But you don’t detest him. Eric Roberts did a really great job of sort of walking that fine line. You basically witness a man who is super-likable but didn’t have the balls to own up to his responsibility. And you know, those people exist in this world.

TVLINE | How does it affect Jackson, having finally gotten to speak his piece with him?
I think it’s like an opening of a door and then a closing of it. It seemed to me that he’d had this curiosity his whole life. He thought he needed his father, and then he realized that he doesn’t. There’s something deeply empowering about that that I think is pretty beautiful. There’s a strength that is kind of unleashed as a result of this journey for him.

What did you think of #JaprilTheSequel? Was Roberts who you pictured as Jackson’s dad? Are you hoping for a Japril remarriage? Hit the comments.