The path to war with the Saviors just got a whole lot shorter.

Though Daryl saved Carol from being a victim of Richard’s scheme to spur Ezekiel to action, Sunday’s episode of The Walking Dead found the king’s right-hand man coming up with an alternative plan, which, right on cue, went disastrously awry. How disastrously? By the end of the hour, two characters were dead — and neither of them were Saviors. That disastrously. Read on for all the gory deets.

‘JUST TELL ME IF IT’S TRUE’ | Early on in “Bury Me Here,” Carol, haunted after her reunion with Daryl, marched toward a skyline as pretty as the backdrop to a Charlie Brown cartoon to visit the Kingdom and ask Morgan why Jesus had brought Rick & Co. there. Had Daryl’s too-good-to-be-true talk about Alexandria’s deal with the Saviors been a lie? When she didn’t buy Morgan’s feeble fibs, he offered to escort her to Alexandria so that she could speak to Daryl herself. But, Morgan noted, she had claimed to want to get away from everyone. Had she changed her mind? Was she learning that it was too late to get away? Leaving frustrated, Carol denied Benjamin’s request to walk with her so that he could pick up some of her walker-felling skills.

While outside of the Kingdom Richard was digging a grave beneath a child’s backpack with the name Katy on it — hello, foreshadowing! — Benjamin was inside, further bonding with Morgan by giving him a painting for his spartan quarters. “I was getting tired of looking at that nail,” Morgan cracked. Later, as the Kingdom’s liaisons with the Saviors prepared to make their regular drop-off, Richard apologized to Morgan for the antagonism between them and acknowledged that the newcomer to the community was a good man. However, he added, “the day’s coming when you can’t be that good.” When that day arrives, don’t feel bad about it. En route to the drop-off, Ezekiel and his contingent were blocked by a row of shopping carts that seemed to have been designed to lead them to an open grave — guess whose — marked with a sign reading “Bury me here.” 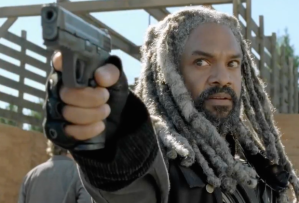 ‘DONT INTERRUPT THE KING’ | When the group at last arrived to the drop-off — late — things went south fast, then continued spiraling downward. First, Jared hit Jerry for standing up for the king; then, Gavin, irked about their interactions being “unnecessarily tense,” took the Kingdommer’s guns, because “things [were] about to get emotional.” Why? According to his count, they were short a cantaloupe. Ezekiel offered twice the tribute in an hour’s time, but Gavin wasn’t hearing it. “The problems have to end now,” he said, allowing Jared to point his gun at Richard’s temple. Only, when Richard made it clear that he was willing to be sacrificed (“Just do it”), it ticked off Jared, so he shot Benjamin instead!

Though Gavin was pissed at Jared for going off script, he still made Ezekiel promise before leaving to get Benjamin help to bring the balance owed tomorrow. Unfortunately, the boy was bleeding out so badly that he was beyond help. Before he expired at Carol’s — there’d been no time to get him all the way to the Kingdom — he assured Morgan that it was OK, reminding him that “to injure your opponent is to injure yourself.” Gutted, Morgan returned to the open grave and flashed back through his whole miserable post-apocalyptic experience. He even came close to slitting his wrists before kicking a plastic crate and finding beneath it… the cantaloupe that the Kingdom had been short!

‘IT WAS SUPPOSED TO BE ME’ | Hauling ass back to the Kingdom, Morgan confronted Richard, who admitted that he’d set up the conflict, having been warned that the next time one arose, it would be his head on the chopping block. He had been trying to sacrifice himself. (Which would have seemed a lot nobler if he hadn’t so recently been just as willing to sacrifice Carol.) Once upon a time, Richard went on, when the apocalypse had first happened, he had done nothing, and it had cost him both his wife and child. So he couldn’t do that again. He wouldn’t and he hadn’t. And anyway, “we can use what’s happened” to show the Saviors that the Kingdom gets it, he suggested. Then, once they’ve regained the Saviors’ trust, they could join Alexandria, etc., and end their enemies once and for all. 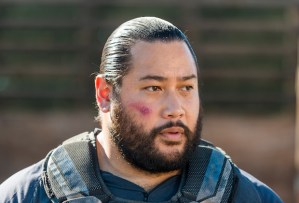 ‘START WALKING BACK NOW BEFORE I KILL YOU’ | By delivery time the following day, Richard still hadn’t kept his promise to Morgan to tell Ezekiel what he had done. Overhearing just enough to be suspicious, the king wanted to know what they were discussing, but they were interrupted by the Saviors’ arrival. In so far as one of Negan’s henchmen can seem remorseful, Gavin actually did seem kinda sorry to hear that Benjamin had died. Of course, he still wanted that bleeping cantaloupe. As Richard handed it over, assuring that the Kingdom really understood, Morgan attacked him, strangled him and bashed his head into the ground right in front of everyone! After explaining to Ezekiel that Richard had orchestrated the previous day’s tragedy to start a fight with the Saviors, Morgan then went through with his victim’s plan (in a way, granting his death wish): “I wanted to show you that we get it,” he told Gavin.

While Ezekiel reeled from the revelation, Morgan hastened to mention that Richard had wanted to be the one to be killed, not Benjamin. “He thought he could choose, and that’s why Duane had to die,” he said, accidentally replacing Benjamin’s name with that of his late son. After sending Ezekiel and the others back to the Kingdom, Morgan buried Richard in the spot his sign had indicated, took out his aggressions on some walkers, then visited Carol, revealing not only that he’d murdered Richard but also — at her request — that the Saviors had killed Glenn, Abraham and more. Rick wants to fight them, he added. As for Morgan, he was going to go kill them one by one. Wait, she said. “You can go and not go.” Finally, we saw him sharpening a stick on her porch, while she returned to the Kingdom and told Ezekiel that she’d be there from then on. “We have to get ready,” she told the king. “We have to fight.”

What did you think of “Bury Me Here”? Hit the comments.