To paraphrase a classic Buffy the Vampire Slayer exchange: No weapons, no friends, no hope. Take all that away, and what’s left?

Your ability to choose Buffy’s perfect partner — Angel or Spike — in this Throwback Thursday poll.

Joss Whedon’s WB-turned-UPN series premiered 20 years ago this week, and in celebration, we thought we’d decide the classic dilemma once and for all. Sure, there were other men who caught the Chosen One’s eye here and there (how’s it hangin’, Riley?), but any true fan knows that our girl’s heart only ever beat double-time for these two fanged fellows. 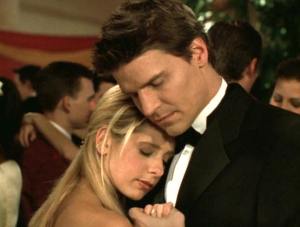 THE CASE FOR ANGEL | He has Buffy’s best interests in mind even before they officially meet. In fact, he’s hesitant at first to get involved with her at all, because he knows that a life lived by his side will only bring her pain (not to mention a complete lack of sex, thanks to that pesky Gypsy curse). He’s a skilled fighter and a dependable fellow soldier — as long as you’re willing to look past that whole period where he lost his soul, reverted to the twisted killing machine known as Angelus, went to a hell dimension and then acted like a wild animal until he got his stuff back together. But even after Angel leaves town for Los Angeles, Buffy can count on him to be there when she needs him most, whether it’s to console her after her mother’s death or to provide an appreciative audience as she scythes an enemy from stem to stern. Best of all, he’s always striving to be a better man, one worthy of being in the presence of so great a woman/Slayer as Buffy. 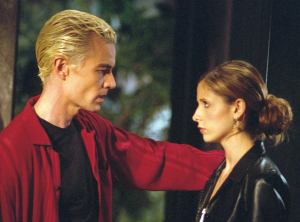 THE CASE FOR SPIKE | Spike takes what we’ll call an “alternate” route to Buffy’s heart: He spends the first several seasons of the series actively trying to kill her. Then he becomes obsessed with her, commissions a sexbot in her image, tries to kill her a couple more times and then realizes that he’s falling in love with her. The course of true love never did run smooth, eh? The frustrated poet-turned-punk vampire has a deep affection for the Summers women — ‘Lil’ Bit’ Dawn, in particular — and works overtime to keep her safe when Buffy dies (albeit temporarily) by Glory’s hand. Oh, you want to talk about sex? Once Buffy’s back, she and The Bleached One engage in naked shenanigans so earth-shaking, they level a house. But as time passes, he becomes more of an emotional anchor for her, growing so selfless along the way that he actually sacrifices himself in an effort to save the world — and Buffy — from an impending apocalypse. Swoon.

Now that you’ve reviewed your options, it’s time to choose,: