We have a lot to discuss, but first things first: The next time Dean Cain breaks into your apartment and starts rattling off conspiracy theories, just cover your ears and send him on his way.

Alex really could have used that memo before Monday’s Supergirl, during which J’onn tested her loyalty by disguising himself as Jeremiah and successfully wooing her to the dark side. (But not, like, Darkseid. That’s a whole other thing.) Anyway, Kara refused to help Alex go rogue — she agreed with J’onn’s decision to suspend her sister from the DEO — but she was still able to track down Cadmus with help from a somewhat unlikely duo: Maggie “Ride or Die” Sawyer and Brian. You know, the Alien.

At Cadmus HQ, Jeremiah attempted to sell Alex a sob story about protecting his family in order to help her see the beauty of his wicked ways, but things fell apart… rather quickly. And during the height of the madness, Alex and Lillian ended up calling to him like a puppy who was deciding who his real owner is. He chose Alex, allowing her — and Supergirl, who tracked them down with an assist from Lena — to stop a ship full of kidnapped aliens from being sent back into space. (Yay!) 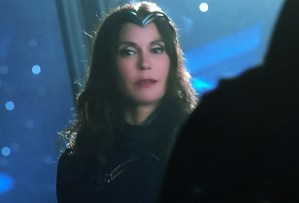 Speaking of aliens, this week’s real treat was the introduction of Teri Hatcher and Kevin Sorbo as a pair of royals — the King and Queen of Daxam, I presume? — who are finally landing on Earth after a great journey. Oh, and let’s not forget about that spoiler-filled promo for Supergirl‘s March 20 return, which revealed Mon-El’s big secret: As  many fans have suspected, he’s the prince!

Also in the episode…

* I’ll admit, I’d kind of written Winn off earlier this season as he gradually faded into the background, but his relationship with Lyra is renewing my interest in him. They’re real cute together, and I think their story is an important one.

* This might be a controversial take, but Kara totally deserved to be fired. I know we suspend our disbelief a lot for this show, but if you think about it, anytime she’s writing about Supergirl, she’s literally making up her own quotes. (And that’s not even what got her into trouble this time!) Kara is obviously a powerful force for good in the world, but working at a newspaper probably isn’t the ideal — pardon the pun — outlet for her.

So, did you guess Mon-El’s royal secret? And did you also audibly gasp when Hatcher made her grand entrance? Drop a comment with your thoughts on the episode below.