And they’re off! In Sunday’s episode of The Walking Dead, Rick and Michonne searched high and low for the firepower that they were going to need in order to set in motion Alexandria’s deal with the junkyard collective. But, although their efforts weren’t in vain, they also weren’t enough. So, by the end of the hour, two survivors had decided to take matters into their own hands. (Yes, because that always goes so well.) Who embarked on a suicide mission? Read on…

‘WE’RE FIGHTING THE FIGHT’ | As “Say Yes” began, Rick and Michonne were having a grand ol’ time scavenging. True, they’d only found a coupla guns, but they managed to steal some batteries (and pretzels!) from a pair of Saviors, and were hooking up every chance they got. Back in Alexandria, Rosita, whose attitude adjuster seems to have gotten stuck on “sour,” was having a time that was anything but grand ol’. First, she took out her frustrations on Tara, who suggested, “Maybe you could just save all this” aggression for the Saviors, then she took off on her own in search of guns. Alas, even after dispatching what had to be one of the series’ all-time ugliest walkers, she went home empty-handed.

Pissed — which I probably needn’t mention anymore since she’s always pissed — Rosita lit into Gabriel for convincing her not to go after Negan before he’d murdered Spencer and Olivia, and taken Eugene. Rosita would be dead if she had gone through with her plan, but that, too, made her angry. “I’m here,” she spat, “because I was stupid enough to listen to you.” Acknowledging that “it’s easier to be dead” than alive, Father G gently reiterated that he’d done what he felt was right, especially since she was so badly needed. Furthermore, he challenged her to make what needed to happen, happen — beyond yelling at the fool he was willing to let her say he was. The next day, Tara confided in Judith — as good a listener as there is — about Oceanside and her fears that, if she told Rick about Cyndie’s community, the women would fight Alexandria rather than join the fight against the Saviors.

‘YOU CAN HANDLE EIGHT’ | In the field, Rick and Michonne happened upon a high school that had been having a carnival at the end of the world. So its grounds were full of zombified soldiers — armed soldiers! What ensued as they attempted to assess and deal with the promising situation was some of the cutest, most couple-y stuff we’ve ever gotten to see from them. First, they fell through the roof of the school, laughing hysterically before they discovered that in front of them lay a treasure trove of nonperishables (including a chili/mac-and-cheese combo, for Pete’s sake!). Then, over a candlelight dinner, they planned the future of the world, with him only agreeing to reorder things post-Negan if she did so with him. The next day, they engaged in a pretty adorable lovers’ spat over which of them would block a hole in the school’s fence with a car and which of them would take out eight walkers in the way. Too late, he realized that the car’s brakes didn’t work and rolled straight through the gap he’d hoped to close. “I think we overshot it,” he cracked. “You think or you know?” she replied. 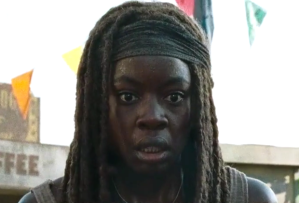 As walkers lumbered toward them, Rick and Michonne delighted in leaping behind the carnival’s barriers and dispatching them. (And they say romance is dead!) But, when he took a fall while attempting to bag her the deer that he owed her, things got serious fast. So serious that, at one point, she mistakenly believed that she was witnessing the walkers devouring her boyfriend! Later, on the way home to Alexandria, Rick — knowing full well how freaked out she had been at the thought of his demise — admitted that he didn’t mind taking night watches because he was having trouble sleeping, always “thinking about what we lost… thinking about my friends… ” (Nice shout-out to Glenn saving his ass in the series premiere.)

‘IT’LL BE WORTH IT’ | Furthermore, Rick warned Michonne that, when the war against the Saviors began, they would lose more people — “maybe even each other.” If that happened, whoever was left would carry on, because in the end, it wasn’t really about them, it was about the future — Judith, and Glenn and Maggie’s baby. If he was the one who didn’t make it, he added, it would be up to Michonne to lead everyone. And he knew that she could do it. How? “You led me here,” he replied. Mind you, there were still obstacles aplenty to overcome before they’d have to worry about losing one another. For starters, Jadis wasn’t satisfied with the number of guns they’d scored. “Not enough,” she said. “Need nearly twice.” At least Rick bargained to keep some of the firearms — and the metallic cat he’d taken! (So there!) 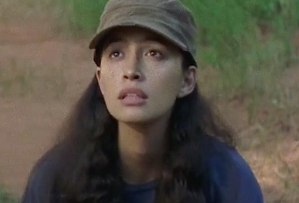 As the hour drew to a close, it appeared that Tara was about to tell Rick about Oceanside and its impressive arsenal. Meanwhile, Sasha showed up at the Hilltop… but not to mourn Abraham, to ask for Sasha’s help in doing what she’d wanted to for ages — kill Negan. Sasha was in on “one condition,” she said. “I get to take the shot.” Since Rosita had a gun from Rick and Michonne’s recent scavenging as well as the lowdown on Negan’s place, and Sasha had Jesus’ map of how to get there, they had everything they needed. “It’s a one-way ticket for both of us,” Rosita noted. But that didn’t seem to much bother them.

So, what did you think of “Say Yes”? Were you relieved to see Rick and Michonne happy, if only for a little while? Do you think Rosita or Sasha will survive their mission? Hit the comments.