And you thought there was no love lost between Jennifer Aniston and Angelina Jolie!

With the debut Sunday of his new FX anthology series FEUD, Ryan Murphy drew back the curtain on the rivalry between Bette and Joan, with (as you well know) Susan Sarandon as Davis and Jessica Lange as Crawford. The reviews, including TVLine’s, have been good. But did you, too, find the drama as intoxicating as a flask of 100-proof vodka? Let’s go over the events of the pilot, then you can weigh in in the poll below.

‘THESE ARE LEAN TIMES, MAMACITA’ | Bette and Joan kicked off with a glimpse at a 1976 documentary shoot, during which Olivia de Havilland (Catherine Zeta-Jones) informed her interviewer that, although pal Davis and Crawford’s feud was one “of Biblical proportions… feuds are never about hate, feuds are about pain,” which we’d see soon — and often — enough. From there, we flashed back to the ’61 Golden Globes, where Joan, upset over Marilyn Monroe’s win, got so soused that she earned herself a morning-after visit from Hedda Hopper (Judy Davis). Joan hadn’t been drunk, she insisted. “I must have eaten something that disagreed with me.” Hedda’s guess: “Crow?”

When Joan — yesterday’s It girl — attempted to decline to comment on Marilyn — today’s It girl (ouch) — the columnist threatened to reveal that the actress, in spite of being the widow of a Pepsi exec, was in dire financial straits. How dire? Her loyal maid Mamacita, played by Broadway scene stealer Jackie Hoffman, had to remind the gardeners that, whether they were getting paid, it was still “an honor to prune Miss Crawford’s bush” — that dire. Desperate to get back to work but unwilling to play Elvis’ grandmother, Joan took her agent’s advice and pored through novels looking for a project to develop. After discovering the thriller What Ever Happened to Baby Jane?, she sent it to her Autumn Leaves director Robert Aldrich (Alfred Molina), whose assistant Pauline (Alison Wright) suggested that it could be another Psycho. In need of a hit himself, Bob quickly came on board. And, as it happened, Joan knew exactly who should — in fact, who had to — co-star. 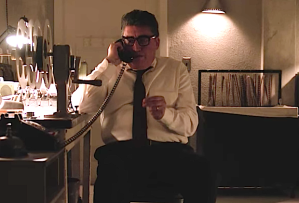 ‘THESE ARE THE PARTS OF A LIFETIME’ | Paying a visit to Bette in New York, where she was appearing in a Broadway production of The Night of the Iguana, Joan — whom her rival insisted on calling by her real name, Lucille — suggested that, since juicy parts for women in film weren’t coming along very often these days, they should team up on Baby Jane. Female roles would come back in fashion, Bette insisted. “But,” Joan retorted, “we won’t.” If Bette came on board, she could even play Baby Jane. The lead? asked Bette, incredulous. “You can call it that,” Joan said. After reading the book, Bette let Bob convince her that “this is gonna be the greatest horror movie ever made.” That is, if he could get it made. One studio wanted to cast younger actresses (Audrey Hepburn and Doris Day). Another wanted to tell the story from the P.O.V. of a sexy neighbor played by Natalie Wood.

Finally, Bob had no choice but to turn to Jack L. Warner (Stanley Tucci), whose loathing of Bette — who’d brought down the studio-contract system on his head — was possibly even greater than Joan’s. As you’d expect, the embittered studio head swore he’d never work with Davis again. In fact, he added, “her unemployment is my long-simmering revenge.” But, since TV was kicking the studio’s ass, Baby Jane was a genre TV wasn’t touching, and Bob would even pay Jack first, a deal was struck. Naturally, the press ate it up. Also naturally, it didn’t take long for things to sour. At the contract-signing, Joan noticed that Bette was getting $600/week more than her in expenses, and hit the roof. When Bob assured her that it was merely an oversight, and one he could fix, she got in his face seductively. “It’s not about the money,” she purred. “It’s about trust.” Since he wasn’t interested in a kiss, she angrily demanded $1,500.

‘SHE COULD FINALLY EXHALE’ | During another documentary interview, Joan Blondell (Kathy Bates) informed us that Crawford had continued making great movies throughout the ’50s — a rough time for broads like them in La La Land — until she’d married Pepsi bigwig Alfred Steele. For her part, Bette, crushed when offers didn’t come rolling in post-All About Eve, had miscast herself as the missus of her Eve leading man Gary Merrill (Mark Valley) when, really, she was “the one who needed a wife,” she noted. Ironically, the marriage hadn’t gone south because Gary had been bad in bed but because he had been bad on stage. “When Bette had to choose,” Blondell observed, “she always chose the professional over the private.”

Meanwhile, Joan complained incessantly to the man in her life about Bette, even blaming her nemesis for one of her failed marriages. When he wondered aloud why they weren’t friends, having as much in common as they did, Joan recalled that, after winning the Oscar for Mildred Pierce, she’d received many congratulatory notes — but not one from any of Hollywood’s bitches, and certainly not from the queen bitch. Hearing that, he realized that Joan actually admired Bette — and was he ever right. “I will have her respect,” Joan vowed, “even if I have to kill both of us to get it!” 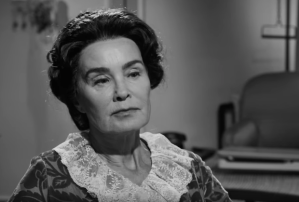 ‘TOGETHER AT LAST’ | On the first day of the Baby Jane shoot, Joan irritated Bette — who brought along daughter B.D. (Kiernan Shipka) — by handing out gifts to the crew. But both of the movie’s stars were nervous. When Bette caught Joan tippling in her dressing room before noon, she asked, “Got enough for two?” and they raised a glass to their team-up. Cutting through the B.S., Bette went so far as to ask Joan to do her best, because when she was good, she was great. “Oh Christ,” Bette then exclaimed upon seeing tears in Joan’s eyes, “you’re not gonna cry?” But she was. The compliment meant that much to her. However, as quickly as the truce was called, it was broken. “Lose the shoulder pads and cut back on the lipstick,” Bette told her co-star. “You’re playing a recluse who hasn’t seen the sun for 20 years, for Chrissake.”

Later, Joan pitched a fit when she spotted Bette bending Bob’s ear about her look, and the director begged Davis to let him handle Crawford carefully. They hadn’t even worked out Bette’s Baby Jane drag yet, for crying out loud. By the time the cameras rolled, Joan’s look had been toned down significantly, and she basked in the praise she received from Bob after playing her first scene. “I’m just getting warmed up,” she said, relieved. At the same time, Bette shocked B.D. with the extreme look she’d developed for her own character. “Christ,” gasped Joan upon getting a gander at Bette in costume, “she can’t be serious.” Of course, not only was Bette serious, her daring was applauded — literally — by Bob and the crew.

‘WELCOME TO THE HOUSE THAT FEAR BUILT’ | Watching dailies, Joan worried aloud about how unnecessarily harsh the lighting was on her. Finally, she could stand to see no more and left. Bette, for all of her bravery on the set, had difficulty watching, too. She wiped away tears after the scene unspooled in which Baby Jane reacted in horror to her own reflection. Then, as Episode 1 drew to a close, the “Hudson sisters” arrived at Hedda’s for a party, only to discover that they were to be the only guests. In spite of the ambush — and because of the free-flowing vodka — the gossipmonger was hoping that Bette and Joan would dish on one another. Instead, to Hedda’s chagrin, the actresses kept their claws retracted. For the moment, at least.

So, what did you think of the premiere of Bette and Joan? Are you digging Sarandon and Lange as Davis and Crawford? Vote in the poll below, then hit the comments with your review.