If you created a TV show in a laboratory with the specific aim of winning a Best Actress Emmy… it’d probably look a lot like FX’s FEUD: Bette and Joan. For better or worse.

The first season of Ryan Murphy’s new anthology series (debuting Sunday, March 5 at 10/9c) is an actor’s dream, letting Jessica Lange and Susan Sarandon rip each other to shreds and chew up every bit of scenery as dueling Hollywood divas Joan Crawford and Bette Davis. Their performances are fantastic enough to live up to the lofty billing — and to overlook some of the shakier aspects of the production. 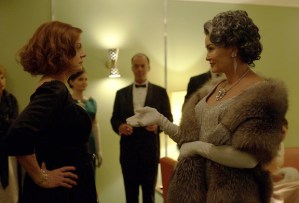 Bette and Joan is set during the filming of the 1962 camp classic What Ever Happened to Baby Jane?, with aging stars Crawford (Lange) and Davis (Sarandon) playing dysfunctional sisters and battling each other for the spotlight. It’s meaty material, to be sure, and Murphy, who directs three of the first five episodes, has the boldly over-the-top touch to bring it to life. The decadent sets and costumes are dripping with old-Hollywood glamour, and it’s undeniably delicious to watch these two great actresses trade savage barbs back and forth like a pair of seasoned Wimbledon champs knocking a tennis ball around.

The mutual hatred between Crawford and Davis makes for tabloid headlines, so their director (Alfred Molina) and studio head Jack Warner (Stanley Tucci) stoke the feud to promote their picture. But the ladies also occasionally call a truce and join forces when they have a common foe, like when they both want a perky young blonde fired from the movie because she might pull focus away from them. The on-set intrigue is a fun peek behind the showbiz curtain, but Lange and Sarandon also make sure there’s real pain and pathos beneath all the bickering.

You see, things weren’t easy for mature actresses — or women in general — in the 1960s. And if you somehow didn’t know that already, don’t worry: FEUD‘s dialogue will hammer it into your skull with numbing frequency. The theme of older actresses being put out to pasture is certainly worth exploring, but it doesn’t need to be voiced aloud by nearly every character that comes on screen. And when the writing isn’t preachy, it’s self-consciously hammy, more interested in giving its actors a show-stopping monologue than in portraying the way people actually talk to one another. 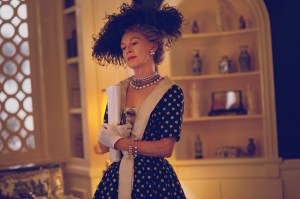 Also, as strange as this sounds, FEUD might have too many great actors in it. The cast is positively littered with Oscar winners and nominees; Judy Davis, in particular, is a real firecracker as gossip maven Hedda Hopper. But, as often happens on American Horror Story, Murphy can’t resist cramming too many stars into too many roles — Kathy Bates and Catherine Zeta-Jones pop up here briefly, only to vanish — and the narrative gets unnecessarily muddled as a result. With only eight episodes to play with, FEUD badly needs focus, and too often lacks it.

But the heart of Bette and Joan, of course, is the dream pairing of Lange and Sarandon. They’re two of our finest living actors, and both give richly nuanced performances that deserve all of the many award nominations they’re sure to rake in. If I have to favor one, the slightest edge goes to Lange, who movingly embodies Crawford’s trembling vulnerability along with her steel spine. Davis is more guarded, still wounded from years of rejection, but Sarandon’s take on her brittle bitterness is no less praiseworthy. And the two of them on screen together are, as you would expect, absolute dynamite.

Since reviving Lange’s career with AHS, Murphy has dedicated himself to showcasing female performances, and actresses have flocked to his projects as a result. Bette and Joan might be the ultimate end-result of that dedication, with two all-time acting greats pushing each other to new heights. Lange and Sarandon pay him back with performances so powerful, they could light up a row of Hollywood marquees. In fact, the two shine so brightly at times that we can hardly see all the other flaws.

THE TVLINE BOTTOM LINE: FEUD serves up two titanic performances that command attention, even when the non-acting aspects of it falter.