Friendly warning: This article contains spoilers from Monday’s Supergirl. If you’re not caught up, make like the Girl of Steel and keep on flying.

Supergirl is officially running out of people she can trust.

As promised, Monday’s episode featured the return of Jeremiah, but the Danvers family’s joy was soon overshadowed by doubt and suspicion — and rightfully so. Not only did Alex and Kara’s father steal the National Alien Registry from the DEO, but he’s also in league with Lillian Luthor! (So, yeah, Alex letting him escape in the woods probably wasn’t the smartest idea.)

Of course, Jeremiah isn’t the only one with a secret: “I know who you are,” he told Mon-El this week, “and I doubt Kara would like the truth.”

Below, executive producer Andrew Kreisberg clears up a few lingering questions from the episode, before previewing the madness still to come:

LILLIAN’S PLOT | Still wondering exactly what Lillian is up to? Kreisberg says her new plan is a “shimmy on [her] desire to rid the earth of aliens, and it [leads to] an interesting debate in the next episode between Jeremiah and Alex, if his plan is any more humane. Some of the talking points in the episode, I think, are reflective of the current debate in our world about dealing with immigrants, which we were very conscious of and wanted to speak to.” (Bonus scoop: You haven’t seen the last of Dean Cain. Kreisberg says he’s back in Episode 15, adding that the team is “still figuring out how we’re going to wrap [Jeremiah’s story] up in a nice little bow at the end of the year.”

LEX GAMES | Remember the mysterious box we saw Lillian holding during that flashback earlier this month? Kreisberg won’t reveal what’s inside, but he says that it comes into play during Supergirl‘s season finale.

MON-EL’S SECRET | Mon-El’s true identity — which, as of now, only Jeremiah knows — “sort of comes to light in Episode 16,” Kreisberg says, confirming that it’s “going to cause problems” between Mon-El and Kara. “He doesn’t quite get that it’s the cover-up, not the crime, which I think is really the issue.” 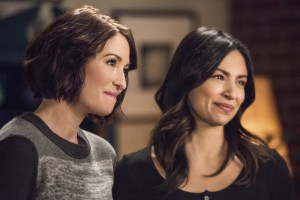 SAVING ‘SANVERS’ | Alex and Maggie may have shared a cute moment at the end of this week’s episode, but don’t be fooled, there’s plenty of drama ahead for the couple. Kreisberg teases a “Kara/Alex/Maggie story, that’s sort of a ticking-clock story. … Alex is in serious trouble, and it’s up to Kara and Maggie to save her. It becomes a story about [how] the sister and the girlfriend both love her, and are debating the best way to save her. It’s a really great story. We’re really excited about it.”

WINN’S WOMAN | Kreisberg says that Winn gradually introduces his new lady friend to the group, adding that there’s a “big Winn-Lyra-Jimmy storyline” in Episode 16. But don’t worry, he’s not hinting at a(nother) love triangle. Looking ahead to Episode 18, Kreisberg teases that “the three of them try crimefighting as a trio, which doesn’t necessarily go well. She kind of becomes the Yoko of the team.”

Your thoughts on this week’s episode? Any theories brewing about what’s still to come? Whatever’s on your mind, drop it in a comment below.