Need to catch up? Check out the previous Big Little Lies recap here.

The skeletons keep piling up in the Monterey moms’ closets this week on Big Little Lies. (And what amazing closets they are!)

Week 2 reveals the full, awful truth about Celeste’s rocky relationship with her husband Perry. We first saw him get rough with her last week, and he actually apologizes for that and agrees to go to therapy. But then he gets frustrated when he can’t meet the boys’ teachers on the first day of school, and he hauls off and slaps Celeste hard across the face. She slaps him back, so he shoves her against the wall. He immediately feels horrible for that and begs her for forgiveness — and then it gets sexual, with him tearing down her pants and them having loud, wild sex against the wall. Um… OK? 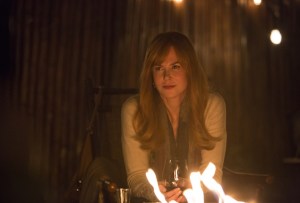 Celeste admits to Madeline over a glass of wine that this is a pattern for them: “Sometimes I think he likes to fight, because it leads to sex.” Madeline calls that “a little bit twisted… but kind of great.” No! It’s not great! Not even kind of! With Perry away on business, he Skypes in to see Celeste, and asks her to undress for him. She starts to do a sexy striptease for him… but then notices the bruises all over her back and cuts it short. Later, though, she’s in bed having Skype sex with him. So it’s all fine now? We officially have a bad feeling about this.

Meanwhile, Madeline has her own battles to fight — many of them. (“I just have a very low tolerance for injustice,” she chirps.) She bristles when the mayor denies funding for her school production of Avenue Q. She declares war on Renata when Jane’s son Ziggy doesn’t get invited to Amabella’s birthday party. And when she finds out Bonnie took her teen daughter Abigail to Planned Parenthood to get her birth control, Madeline predictably explodes, yelling at Bonnie to leave the parenting to her. 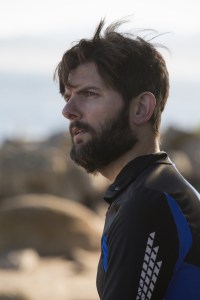 But her obsession with Bonnie — and, by extension, her ex-husband Nathan — annoys her current husband Ed, who pointedly asks her if she’s still in love with Nathan. Madeline denies it, but Ed’s not reassured, which leads to the week’s most strangely compelling scene: Ed and Nathan, meeting to resolve the Madeline-Bonnie feud. It starts out friendly enough, but quickly snowballs into threats. Nathan calls Ed “Mr. Sensitive,” which Ed takes as an insult. And Ed not-so-subtly lets Nathan know that he was bullied as a kid, and he’d love the chance to exorcise some of those demons as an adult. (Keep in mind: Ed says all this while clad in truly dorky cycling attire.)

As far as Jane goes, we don’t learn much more about her past this week — except that she doesn’t say much about her past. Ziggy keeps asking her why they moved to Monterey, but she won’t give him a reason, and she keeps having those visions of herself in a blue dress on the beach. Plus, Ziggy lands in more hot water at school when he tries to make up with Annabella by kissing her. Jane is called in for a stern parent-teacher conference, and Ziggy overhears a mom calling him a “little monster.” Jane forcefully tells him there’s nothing wrong with him… then channels her rage into stabbing a knife into a cutting board.

So two weeks in, who do we think is the murder victim, and who’s the killer? I’m guessing Jane ends up being the killer… maybe Ziggy’s father shows up unannounced at the fundraiser? Obviously, Perry, Madeline and Ed have all demonstrated violent tendencies, too. But Jane seems like the loosest cannon so far.

* Last week, I marveled at Renata’s stunning seaside views. This week, I’m coveting Perry’s magnificent walk-in closet, with racks and racks of shoes. (Full disclosure: I own maybe four pairs of shoes, total. But if I had a closet like that!)

* “I love my grudges. I tend to them like little pets.” Madeline’s always good for a quotable line or two, but this one is a first-ballot Hall of Famer.

* Had to laugh when the school principal referred to Ziggy as “Zigfield.” So formal! So dignified!

* Unlikely suspect alert: Does anyone else feel like we’re seeing a lot of the barista at the coffee shop? He must play a bigger role in this somehow, right? I’d guess an affair with Madeline, but she just noted he’s gay. (Or maybe that’s just what she wants us to think…)

* I also have my suspicions about this “Harry Hippo” stuffed animal that all the kids are bringing home. Could there be a listening device hidden inside that thing?

* This battle over Amabella’s birthday party, with Madeline trying to sabotage it by inviting all the kids to Frozen on Ice: It’s going to get real ugly, isn’t it?

* Madeline’s right: That Leon Bridges song that Chloe picked out at the end, “River,” is a beautiful song. I want Chloe to DJ all of my dinner parties.

Got thoughts on tonight’s Big Little Lies? (Or theories about who died, and who killed them?) Drop ’em in a comment below.