Welcome to beautiful Monterey, California, where everything is a high-class, top-dollar affair… even the homicides.

Sunday’s premiere of Big Little Lies — HBO’s seven-part adaptation of Liane Moriarty’s bestselling novel — opens on a grim crime scene at a lavish school fundraiser. Somebody’s dead, and the town’s nosy residents are all too happy to gossip to the cops about who might be responsible. The victim suffered severe fractures to the pelvis and skull, and the detectives rule the death a homicide, but we don’t learn who actually died, much less who killed them. We do learn a lot, though, about the rich moms who rule Monterey.

Madeline (Reese Witherspoon) is a type-A queen bee who loves to ruffle feathers: She’s planning a school production of the lewd puppet musical Avenue Q. Celeste (Nicole Kidman) is a soft-spoken mom with twin boys whose marriage to Perry (Alexander Skarsgard) is nauseatingly affectionate. And Jane (Shailene Woodley) is new in town, and much less rich and glamorous than her new neighbors. But she’s young, which goes a long way in Monterey. 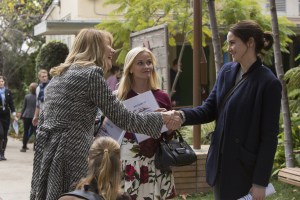 Madeline gives Jane a warm welcome, introducing her to the other mothers at elementary-school orientation — which doubles as a verbal firing range for these competitive moms. Madeline’s rival Renata (Laura Dern) complains about how busy she is after joining the board at PayPal, and mistakes Jane for a nanny. Plus, Madeline has to contend with her ex-husband Nathan (James Tupper) and his new wife Bonnie (Zoe Kravitz), a bohemian yoga instructor whose easygoing, Zen attitude drives Madeline nuts.

The kale really hits the fan, though, when Renata’s daughter Amabella leaves school with red marks on her neck. She says one of the boys in class hurt her — and points at Jane’s son Ziggy. He insists he didn’t do it, and Jane sticks up for him, which leads to a war of words with Renata, with Madeline leaping to Jane’s defense. Renata leaves in a huff… and we get the feeling this incident might be the start of a rift that leads to that grisly homicide.

Plus, we discover that everyone’s life isn’t as picture-perfect as it seems. Madeline is jealous of Bonnie, and feels like her daughters are growing up too fast. Celeste’s marriage turns ugly when Perry violently yanks her by the arm to make a point. And Jane seems to be running from her past: Ziggy’s dad isn’t in the picture at all, and she has strange visions of herself jogging on the beach in a blue dress. One night in bed, she unlocks a drawer and pulls out a revolver, placing it under her pillow.

So despite all the extravagant wealth in Monterey, no one living there is really happy. But are they unhappy enough to kill? And which one of them is the murder victim? And most importantly, how can we make enough money to afford Renata’s incredible beach house with those stunning seaside views?

Give the Big Little Lies premiere a grade in our poll, then hit the comments to tell us what you thought.