This week on Riverdale, Archie finally gets back on the football field, and Jason Blossom finally gets laid to rest in a truly creepy memorial service.

The Blossoms are apparently Riverdale’s answer to the Addams Family, because they live in a creaky old haunted house known as Thorn Hill — with its very own graveyard! Cheryl wants to give the eulogy at Jason’s upcoming memorial service, but her mom Penelope tells her she’d just humiliate the family. (Gee, thanks, Mom.) Cheryl invites the whole Riverdale gang to the memorial, and Veronica offers her a truce. Cheryl agrees… and even invites Veronica to a sleepover the night of the memorial. Sounds like fun!

Meanwhile, Betty is still on the Jason Blossom case, and goes out on a date with his water-polo teammate Trevor to pry information out of him. He tells her Jason was acting weird by the end, selling all his possessions and dealing drugs; Trevor chalked it up to his messed-up relationship with Polly. (Plus, Betty’s dad Hal reveals they sent Polly away because she “tried to hurt herself.”) Betty reports back to Jughead, who wonders, “Why does a rich kid sell drugs?” So they decide to use the memorial as an excuse to dig around Thorn Hill for clues.

Ronnie’s visit to Thorn Hill is, as you might expect, a living nightmare, with a painfully awkward dinner attended by Cheryl’s parents and her spooky old Aunt Rose, who sports a glass eye. Cheryl leaves the table after Penelope blames her for rowing Jason “to his death,” and retreats to her bedroom with Veronica. Cheryl just wants to tell the truth about what happened to her brother at the memorial, and Veronica encourages her to. But Cheryl says her parents would “kill me” — and the look on her face tells us she’s not exaggerating. 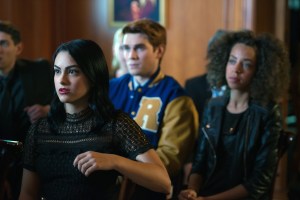 At the memorial, Cheryl stuns everyone by coming out dressed in white — the same white dress she wore on the Fourth of July with Jason — and taking the podium. She says Jason always protected her: “I wish that day at the river, I protected him.” She bursts into tears and apologizes to him, and Veronica hugs her, before Cheryl’s mom steps in to abruptly end the service.

But that’s not even the weirdest part! While snooping around Jason’s old bedroom, Betty and Jughead are confronted by Aunt Rose, and the old bat mistakes Betty for her sister Polly. She notices that “Polly” isn’t wearing the ring Jason gave her — the one that’s been in the Blossom family for generations. If Penelope saw her wearing it, Rose says, she’d “snip it off your finger.” First of all: Yikes. And secondly: Jason and Polly were engaged?!

Betty asks her dad about it, and he admits he knew about the engagement. He also tells her about a century-old blood feud between the Coopers and the Blossoms; Cheryl’s great-grandfather murdered Betty’s great-grandfather to seize control of their maple-syrup business. When Betty tells Jughead her parents lied to her, he wonders what else they’re lying about. And Betty notes whoever destroyed Sheriff Keller’s murder board wasn’t at the drive-in… and her dad wasn’t at the drive-in.

And so Betty solemnly adds an index card reading “The Coopers” to their brand-new Jason Blossom murder board — and nods when Jughead says she needs to talk to Polly. 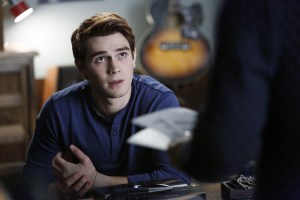 ARCHIE GETS SOME BALLS | Archie is boxing a heavy bag in his room — yes, shirtless — to get into shape for football. He wants to be captain this year and get a scholarship. (Yeah, Arch, you really need to work out more; you look terrible.) But he gets shown up by Reggie at practice, and the coach tells them they’re now competing head-to-head to be captain, and for Jason’s number. Alright, guys, compete to wear your dead friend’s jersey!

Archie’s also working with a new music mentor, now that Miss Grundy’s gone. The guy tells Archie he needs to write his songs down as sheet music, and make music his priority. He works with Val of the Pussycats to put his songs in writing, and they seem to have a bit of a spark together. (Is there a woman on this show who’s not in love with Archie?) But he hurts his hand during football practice, and then his new mentor tells him his songs are “juvenile” and “repetitive.” Ouch, and double ouch.

After Archie gives Penelope Jason’s jersey at the memorial, the coach makes him captain and gives him a new number, saying that retiring Jason’s number was “the right call.” (So why didn’t you make that call, coach?) But Archie declines, saying that the team deserves a captain who’s dedicated to football. So Reggie becomes captain — and Archie goes back to working on his juvenile, repetitive songs.

* We also saw Fred and Hermione inch their way closer to a relationship this week, with her calling him for help after getting a threatening message — a snake in a box — from the Southside Serpents, and him offering her a job. But as she noted, they’re both technically still married. Which reminds me: When are we going to find out anything about Archie’s mom? 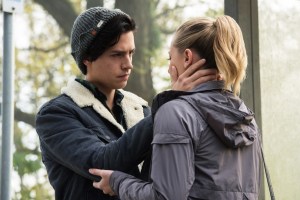 * Did anyone else sense a little romance in the air when Betty saw Jughead dressed up for the memorial? Let the record show I am fully on board with this. They’re both too smart for everyone else in Riverdale, anyway. Also, have you seen this photo from next week’s episode?! Team BettHead!

* Sorry, I can’t take Hal Cooper seriously, because I can only see the actor Lochlyn Munro as Cliff, the frat-boy doofus he played in the seminal ’90s college flick Dead Man on Campus. You haven’t seen it? Oh, you’re missing out.

* In a week filled with creepy moments, the creepiest might have been Penelope brushing Archie’s hair back at Jason’s memorial and saying, “You’re so much like him.” Did she sense a cougar vacancy, with Miss Grundy gone? And seriously, who isn’t in love Archie at this point?