This week on Riverdale, the gang enjoys an old-school night at the drive-in… while an important piece of the Jason Blossom puzzle packs up and leaves town.

Betty is still stewing over the revelation last week that Dilton spotted Miss Grundy’s car at the river on the Fourth of July. She remembers that Archie was “taking” “lessons” (ahem) from Grundy at the time, and starts to suspect them of having an affair. She confronts Archie about it in the Pop’s parking lot, and he blurts out, “Did Jughead tell you?” No, but you just did, genius.

Now Betty’s on the warpath, and she Googles… um, sorry, “Sleuthsters” Miss Grundy and interviews her for the school paper to dig up some dirt. Grundy tells Betty this is her first permanent teaching gig… and what do you know, she also did an independent study with Jason Blossom last year! (She’s got a thing for teen redheads, doesn’t she?) Betty can’t find any trace of Grundy online before a year ago, but Archie says she’s just “cyber-stalking” and asks her to cut it out. Which she agrees to do… for about five seconds.

With Veronica in tow, Betty breaks into Grundy’s car — yeah, Dark Betty! — and finds a lockbox in the backseat. Inside it: a Minnesota ID with Grundy’s photo and the name “Jennifer Gibson”… and a handgun. Betty tells Archie it’s proof Grundy is a liar, and maybe even had something to do with Jason’s death. It’s enough to send Archie to Miss Grundy looking for answers. Grundy reveals when she was “Jennifer Gibson,” she was married to a drunk who put her in the hospital. She got divorced and came to Riverdale to start fresh. She cries on Archie’s shoulder, and of course, he totally caves.

Archie actually does the mature thing and, after giving Miss Grundy a new cello bow as a thank-you, says they should stop their music lessons. She’s sad, but agrees — and then all hell breaks loose. Betty’s mom Alice barges in with Betty and Fred; she found Grundy’s gun in Betty’s drawer, and discovered the affair thanks to Betty’s diary. Alice calls Grundy a “sexual predator” and threatens to go to the cops. Betty fights back, but Grundy gives in, offering to quit her job. Alice says that’s not enough: She has to leave Riverdale, too.

The last we see of Miss Grundy, she’s packing her stuff into her VW Beetle… and leering at some muscle-bound teens walking down the street. So is she just some sex-crazed cougar after all? Do we believe her “Jennifer Gibson” story? And was she somehow involved in Jason Blossom’s death? She may be leaving town, but I’m thinking Grundy’s story is far from over.

Let’s take a look at what else went down in “The Last Picture Show”: 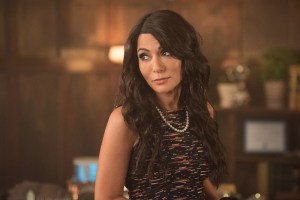 SKEEZ LODGE | Veronica’s mom Hermione is still slinging milkshakes as a waitress at Pop’s, and Cheryl doesn’t want to hand her cash, sniffing that “Lodges are known to have sticky fingers.” To be fair, Hermione pretty much proves her right by having a shady meeting behind the Pop’s dumpster with a member of the local biker gang, the Southside Serpents. Hermione tells Veronica he’s just an old friend… but then we see Mom plopping down that bag of cash she received from Hiram on the mayor’s desk, in exchange for Lodge Realty getting the land the town’s old drive-in movie theater is on.

On the drive-in theater’s last night, Veronica spots her mom sneaking off and follows. She sees Hermione talking again with that Serpent — and hey, he’s played by ’90s heartthrob Skeet Ulrich! — handing him cash and telling him, “As long as Hiram’s in jail, you’ll be dealing with me.” Veronica demands an explanation, and Hermione admits Hiram paid off the Serpents to drive down the value of the drive-in so he could buy the land cheaper. And she reminds Veronica that unethical business practices like that are what pay for her handbags and shoes. Ouch. 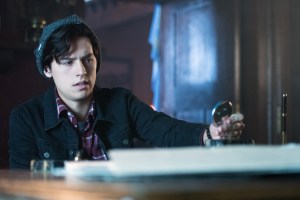 MR. JONES AND ME | We don’t know much about Jughead’s family situation — he seems to have been raised in a booth at Pop’s — but we learn more this week as he campaigns to keep the local drive-in theater open. He’ll lose his job there if it closes, and he appeals to the mayor, telling her stories about him sneaking in as a kid. Then he turns to Fred, whose construction company is set to tear the theater down. When Fred says he can’t help him, Jughead says that’s two Jones boys he’s put out of work. Apparently, Fred fired Jughead’s dad for stealing stuff from work sites. File that one away for later.

He can’t keep the drive-in from closing, but Jughead does arrange one last screening, playing Rebel Without a Cause to a packed house. The next day, he packs up his stuff in the theater’s office, including a photo of him and what must be his sister as kids. Plus, we see a cot, so we know he’s been sleeping there. Jughead spray-paints his name on the building, and then has a quick chat with the Serpent played by Skeet Ulrich, who asks where he’ll be staying now. “I’ll figure it out, Dad,” Jughead replies. Well, well, well… nice to meet you, Mr. Jones!

* Did anyone else think, when Fred went with Archie to Miss Grundy’s string quartet recital, that Fred might try to start dating her? Because that would’ve been amazing.

* Couldn’t help giggling when Veronica referred to Miss Grundy as Archie’s “booty tutor.” If that’s not a term already, it should be. 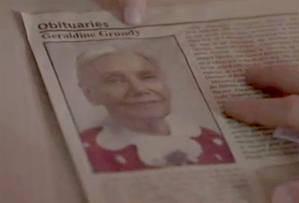 * Archie comics inside-joke alert: Betty warns Archie that the only Geraldine Grundy she could find online was this old woman who died years ago, and shows him this photo (at right). That lady’s a dead ringer for the much older, much less sexy version of Miss Grundy we see in the classic comics.

* I’m liking the new romance Kevin struck up with a Serpent named Joaquin. He’s a gang member, Kevin’s dad is the town sheriff… it’s totally like Romeo and Juliet, you guys!

* Got another good laugh when Kevin teased his dad, “Nice murder wall, True Detective.” But who then broke into the Keller home and tore down that murder wall? The Serpents… or someone who doesn’t want to get caught?

Is Miss Grundy really gone for good? And what did you think of Skeet Ulrich’s surprise appearance? Hit the comments with your post-Riverdale thoughts.