You may want to pour yourself a little more wine and pop some extra popcorn ahead of tonight’s How to Get Away With Murder Season 3 finale.

Over the course of two hours, the ABC drama has a lot of ground to cover, the most pressing issue being the identity of Wes’ killer. And if the final moments of last week’s episode are to be taken at face value, Connor had some role in Wes’ demise — even if he was trying to save the poor kid.

Ahead of the season ender (which kicks off at 9/8c), TVLine spoke with Jack Falahee about Connor’s unfortunate visit to Annalise’s house, his unsteady relationship with Oliver and whether Connor really is as indifferent to Wes’ death as he seems.

TVLINE | We saw last week that Connor was at Annalise’s house on the night of the fire, and he may have been involved with Wes’ death somehow. How soon into the finale will we get context for Connor’s role that night?
About halfway through [the first hour], that will be addressed or potentially resolved. Also, people have really been throwing around “involvement with Wes’ death.” But I would throw it out there that maybe, if we reframe this, he’s involved with Wes’ resurrection. He is doing CPR, you know?

TVLINE | Had you been told, prior to getting the script for last week’s episode, that Connor went to Annalise’s house that night? Did that inform your choices for Connor at all?
No, I pretty much found out at the table read for that episode. It might have been suggested to me a little earlier than that, but [the writers] are constantly toying with different storylines in the room, so they don’t necessarily commit to anything until it comes time for the table read and a production draft to be put out. I was making some educated guesses, as far as choices go, leading up to that episode. 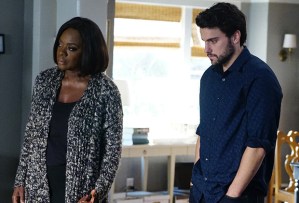 TVLINE | Connor’s main reaction to Wes’ death has been that he doesn’t care all that much. Does he really not care, or — now that we know he was doing CPR on Wes — is he just masking guilt?
I don’t think either, to be honest. He does care. Connor liked Wes quite a lot, actually. Since the beginning, there was always this friendliness between the two of them that we saw as early as the pilot. Connor has this line to Wes where he tells him to find a seat “before the shooter gets here. You don’t want to be a sitting duck.” I don’t want to say it’s a “bromance,” but it is this amicability between the two of them that we saw play out quite consistently. Connor wouldn’t necessarily want to admit that, but he misses him. Connor being there [on the night of the fire] is tragic.

There was also a flashback [in Episode 10] that shows Connor and Wes on the quad, laying in the grass, and they’re talking about their relationships. To me, that shows the friendship these guys have. They didn’t necessarily talk or hang out all the time, but at the end of the day, Connor really felt a fondness toward Wes. His death is sad, and [Connor]’s emotional response to it has been aligned with that. And grief takes many different forms, so him acting that he doesn’t give a s—t has been a way for him to work through things.

TVLINE | Can you speak to what Connor’s relationship with Oliver is like in this finale? The last few episodes seem to have unearthed more trust issues — Connor discovers that Oliver’s a great liar, Oliver learns that Connor was at Annalise’s house that night….
Those trust issues do continue. This season, [the writers] have done a really good job of showing different conflicts come up between Connor and Oliver, starting with the Stanford acceptance letter. That’s emblematic of how relationships work. You do lie to your partner now and then, and you do do things to protect them because you love them. That, to me, is what’s happening here. They both care about each other quite a lot. For obvious reasons, Connor hasn’t told Oliver that he was there the night of the fire, and for additional reasons, Oliver hadn’t told Connor that he kept a copy of Annalise’s phone. They’re both looking out for the other person. It’ll be interesting to see how that plays out when we learn more of Connor’s involvement on the night of Wes’ death. Does Oliver come running to stand up for him, or does it create a greater tear in their already-contentious relationship?

TVLINE | What was your reaction to the identity of Wes’ killer — and how might viewers react?
[After a long pause] The audience will be just as shocked as the cast was.

HTGAWM fans, I ask you one last time: Who do you think murdered Wes? Drop a comment below with your theories and hopes for tonight’s finale.