Need to catch up? Check out last week’s How to Get Away With Murder recap here.

Anyone know a good couples’ therapist in the Philadelphia area? Because Connor and Oliver need that doc’s number, stat.

Just 48 hours after Valentine’s Day, How to Get Away With Murder used its latest episode to remind us that not every couple is cut out for flowers, candy and canoodling. In Connor and Oliver’s case, their romance is more about constant, relationship-altering trust issues.

Take, for example, Thursday’s episode-ending revelation, which Oliver discovered after sifting through his copy of Annalise’s phone files: that Connor did, in fact, check his voicemail on the night of the fire, after Annalise called him over to her house. And he did go. And, at some point during his visit — as we learn in the hour’s final seconds — he was doing chest compressions on an unconscious Wes, in an attempt to resuscitate him.

This all puts a very interesting spin on Connor’s storyline — which, ever since Wes’ death, has mainly involved blaming Annalise for his classmate’s murder and pretending not to care that The Student Formerly Known As Waitlist is gone for good. But perhaps Connor is actually to blame for Wes’ demise?

Of course, it won’t be until next week’s two-hour season finale that we discover who’s really responsible for Wes’ trip to the morgue. In the meantime, let’s recap the other details from “It’s War”:

* Picking up where last week’s Nate cliffhanger left off, we learn that Det. Lahey (probably) had nothing to do with Wes’ death, after all. When he encounters Wes at Annalise’s house on the night of the fire, he tries to persuade the kid not to help his professor anymore, given her selfish track record. But Wes informs Nate that Annalise knew his mother and has cut him countless breaks since he arrived at Middleton — and, in the present day, Nate tearfully reveals to Annalise how guilty he feels that he could have saved Wes, if only he had stayed at Annalise’s house a while longer that night. 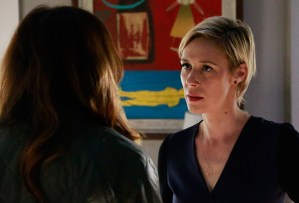 * Finding herself at odds with the Keating Four (and, let’s be honest, everyone else in her life), Annalise decides to write a letter to the attorney general, asking for a formal grand jury investigation into A.D.A. Atwood for misconduct and conspiracy against Annalise. Long story short? It doesn’t take.

Meanwhile, Frank — still in jail! — dials Bonnie’s home number to discuss their case — but it’s Annalise who picks up the phone, and she has to remind him, “You’re being recorded.” Frank keeps up the charade, pretending he’s still talking to Bonnie, and he uses that opportunity to reassure Annalise that he’ll do whatever she needs him to do in order to get them out of their current pickle. That’s when Annalise concocts a new defense strategy: At his next hearing, Frank will request a subpoena for all of Atwood’s text, phone call and e-mail communications on the day of the fire. (Which he does.) He’ll remind the judge that, because of the D.A.’s extreme bias against Annalise and Atwood’s romantic relationship with Nate, it’s impossible for Frank to get a fair trial. (Which he does.) Atwood will be forced to turn over all her files, and reveal any involvement she may have had in the disappearance of Wes’ body, if all goes according to plan. (Which it does.)

Rightly furious, D.A. Denver suspends Atwood, and she uses that opportunity to warn him of some incriminating you-know-what that’s about to hit the fan — a conversation to which we’re unfortunately not privy. But later that night, Nate informs Annalise that (1) Atwood admitted to moving Wes’ body, and (2) Wes was ultimately cremated. (Annalise then relays this news to a devastated Laurel, and I have to repeat: Karla. Freakin’. Souza.)

* Speaking of Laurel, she hires a private investigator to look into the Mahoneys — and it turns out that Sylvia, Wallace Mahoney’s ex-wife, ordered a DNA test on Wes just days before he died. The logical conclusion: If the Mahoneys found out that Wes was Wallace’s son, surely one of them killed Wes, right? Right? (My trusty Magic 8-Ball says, “Ask again after the season finale.”)

* We finally get an answer as to why President Hargrove has been so chummy with Annalise since she was arrested: The D.A.’s office made Hargrove an offer she couldn’t refuse — custody of her children — if she got close to Annalise and assisted with their investigation. Fortunately, Annalise connects those dots before she can dig her own legal hole any deeper, and promptly cuts off whatever friendship she’d been forming with the president.

* Also of note: Annalise begins to eye the prescription meds and cough syrup in Bonnie’s medicine cabinet, though she doesn’t do anything with them; Annalise reveals to the Keating Four that the Mahoneys are responsible for her infant son’s death, a revelation that leaves them stunned; and Bonnie offers to schedule an abortion for Laurel, in the event she doesn’t want to follow through with the pregnancy. (Laurel’s response: “You’re just as bad as [Annalise] is.”)

In summary: It was not a good week for the Middleton crew. For some insight into the season’s penultimate episode, TVLine chatted with Murder co-star Charlie Weber, who broke down Frank’s biggest scenes and shared whether his shifty character might actually be to blame for Wes’ death. 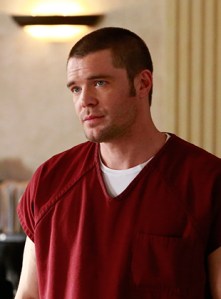 TVLINE | Let’s talk about Frank’s phone call from jail, which he knows is with Annalise but pretends is with Bonnie. He essentially says, “Whatever you need me to do for you, Annalise, I’ll do it. No questions asked.” And that’s a change from two or three weeks ago, when he went rogue and confessed to Wes’ murder without telling anyone he’d do that. Why, now, is he willing to do whatever Annalise and Bonnie want?
He really always has been. These are the two most important people in his life that he’d do anything for, and he is absolutely going to. That’s who he’s been the whole time. He’s just going to continue on that path. He feels that his life is about protecting them.

TVLINE | Earlier this season, though, Frank was on the verge of committing suicide — and now, it seems like he has a renewed commitment to getting himself and Annalise out of this situation. Would you say there’s any part of Frank that’s still tempted to throw in the towel and just admit to all that he’s done?
Not anymore. That’s how low he got, but Frank is a very misguided person, to say the least. That was him at rock bottom. But at the same time, he sees the value in his life because he can’t protect them if he’s dead. So he does see the value in living and protecting himself in order to protect them.

TVLINE | Frank’s relationships with Bonnie, Annalise and Laurel are extremely tricky right now. Heading into the finale, where does he stand with each of those women?
He’s probably the closest, right now, with Bonnie. They’re as thick as thieves. He’s on the mend with Annalise. She’s starting to realize that he’s going to keep helping her, and there’s nothing she can do about it. [Laughs] He’s going to do everything he can to protect her.

And Laurel — that’s beyond complicated. They’re almost strangers now. There will always be this lingering thing, but they speak so rarely. When she went to go see Frank in jail, more than anything, she wanted closure because of the love she had for Wes. And I think she would have had that closure, but when she looked in my eyes, she felt that Frank didn’t do it. Unfortunately for her, that keeps her from gaining closure. So she’s on her own mission, in that respect.

TVLINE | And even though Laurel trusts that Frank didn’t kill Wes, Bonnie still suspects that he may have done it. Who should we believe?
Frank’s earned a certain reputation. The audience has a real love-hate thing with Frank, and I totally get it. If you look at his history, and the people that he’s killed, it’s always been to protect someone he loves. That’s not necessarily an excuse, but he has this very big, misguided heart, and it’s cost a few people their lives. For me, it doesn’t seem that [killing Wes] fits. But you really never know with our show. [Laughs]

TVLINE | Give me your best Frank-related teaser for the finale.
Frank’s storyline is surprising. We’re used to him being a certain guy in these finales, and this strays from the path a bit. But it continues the story of what he’s been doing all season, and maybe gives a little closure to the very difficult journey he’s had.

Your turn, Murder fans! Do you suspect that Connor killed Wes — and if not, who do you think did? Drop a comment below with your thoughts on Thursday’s episode.