Somehow, Wes Gibbins is causing more chaos in death than he ever did in life. And that’s really saying something.

On Thursday’s episode of How to Get Away With Murder, the effects of Wes’ death continued to ripple through Middleton’s campus and the Philadelphia court system, leading to (1) a deeply uncomfortable funeral service, (2) an unsettling family matter for Annalise and (3) a truly “WTF?!” moment at the morgue.

First, a few highlights of the latest Murder installment:

* Laurel is discharged from the hospital just in time to give a eulogy at Wes’ memorial, which quickly gets derailed when she notices unfamiliar faces crying in the pews. “I bet you’re all glad he’s dead, because now your ranking will go up,” she says through tears. “You’re all vultures glomming onto someone else’s tragedy!” (Side note: Karla Souza has never been better than in this episode, as Laurel slowly gets hit by the reality of Wes’ death.)

* After the funeral, Oliver receives a call from the investigators in Annalise’s case, asking him to come in for questioning. Naturally, Oliver spirals into a panic attack at the thought of being questioned by detectives… but once he’s in the interrogation room, he plays it totally cool, easily lying about why he went to a campus computer lab the night of the fire. (“I was so emotional, I didn’t know where else to go,” he says, instead of folding like a house of cards to admit he wiped Annalise’s phone.) 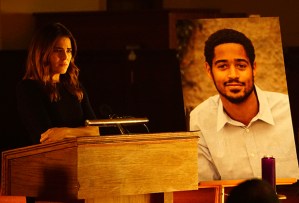 * Much to Annalise’s chagrin, her parents show up at her arraignment, and she’s humiliated to have them see her looking so low. But her embarrassment is quickly replaced by horror as she discovers something’s not quite right with her mother: When Ophelia volunteers to take the fall for Annalise’s house fire, Annalise realizes her mom is talking about the other house fire — the one Ophelia set years ago, in order to murder her husband’s sexually abusive brother. Later, as Annalise’s parents wrap up their jail visit, her father confirms that Ophelia is experiencing early stages of dementia and goes through phases of confusion. (Even worse, Annalise is forced to inform her dad that the house fire of which her mother speaks is not a story; it really happened.)

Later, Annalise baits her violent cellmate into punching her (by accusing the woman of sexually abusing her kids), a stunt that conveniently leads to her release on bail. Once free, she lies to her mother that all charges against her have been dropped. Ophelia is overjoyed to hear that her daughter is “no longer” in dire legal straits — and the happiness on Cicely Tyson’s face is so heartbreakingly genuine that, for a minute, it’s easy to believe that Annalise actually has gotten herself out of her latest dilemma.

* In a flashback to the night of Wes’ death, he gets in a cab en route to Annalise’s house, shortly after his uncomfortable chat in Frank’s car. After ignoring a call from Laurel, Wes dials an In Case of Emergency number in his cell contacts — and when the mystery person answers on the other end, Wes replies, “Hi. It’s Christoph.” Intrigue!

And yet, the most puzzling moments of the episode involve Nate, who finds himself at the epicenter of the Wes scandal. After helping Laurel get access to the morgue, where she hopes to say a proper goodbye to Wes, Nate unzips Wes’ body bag… to find a completely different person inside. Nate is furious about the corpse’s mysterious disappearance and takes his concerns to the D.A.’s office — but when A.D.A. Atwood presents Nate with the transfer papers for Wes’ body, it’s Nate’s (presumably forged) signature on the dotted line. Um. Okay.

What’s more, we get another interesting glimpse into the night Wes died, via flashback: After Nate arrives at Annalise’s house to find it empty, he goes downstairs to investigate a suspicious noise. There, walking through the front door, is Wes, and as the two men exchange tense “Hey”s, the credits roll.

TVLine spoke with Billy Brown, the man behind Nate, to get his thoughts on that episode-ending revelation and whether viewers should be wary of the detective in the final weeks of Season 3. 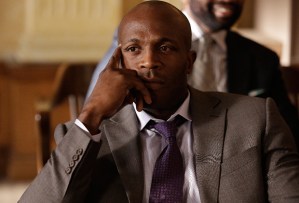 TVLINE | Prior to getting the script for this episode, had you spoken with series creator Pete Nowalk about Nate becoming a suspicious factor in Wes’ death?
No. That kind of detail would not be shared with me. When we did the pilot, and I probably had two or three scenes, I had no clue how they were going to relate to the following episode. Pete just said, “Don’t worry. It’s going to be great. It’s going to be a lot of stuff you probably haven’t done before. But just trust in the process.” And that stands true for Season 3, Episodes 11 and 12.

TVLINE | So, in that case, what was your reaction to learning that Nate and Wes encountered each other at Annalise’s house, prior to the fire? Did it make sense to you, since we did know that Nate was in the house at some point?
I was surprised that Wes pops in. Because keep in mind, from the beginning of the season, the actors were confronted with each of their characters possibly being under the sheet. There was always heightened speculation about that. So, yeah, I was surprised [when Nate and Wes saw each other], but you get acclimated to low-oxygen survival. It’s a high-altitude tightrope act.

TVLINE | Nate seems to be at the center of a lot of shady business. The medical examiner first tells him that Wes’ cause of death was not the fire, then says it is the fire. Then, in this week’s episode, someone signs Nate’s name to the transfer papers for Wes’ body. Can you speak to how soon we’ll get an answer about what’s going on?
With this being Episode 12 out of our 15, there’s a lot you’re going to find out quite quickly in the next three weeks.

TVLINE | Do you have any guesses as to who signed Nate’s name on those transfer papers?
No guesses. But it was done in such an amateur-ish way. To think that you’d be able to forge Detective Lahey’s signature, and have him and others not immediately raise an Olympian amount of suspicion, is almost absurd, in Lahey’s assessment. He thinks, “This is the most f—king ridiculous thing ever.” So it can’t be someone with too big a brain. It emboldens Lahey to move forward on that trajectory, and his force of will grows greater and greater with every possible impugning of his character. He’s not faltering at all in the face of these growing storms around him.

TVLINE | Where do you think Nate’s loyalties lie right now?
To himself. To himself, for sure.

TVLINE | Should viewers be trusting him, then, if he’s only looking out for himself?
Lahey can be trusted. The question is more pointed if asked, “Who can trust Lahey?” Because those in his immediate orbit can’t trust themselves or one another. Lahey’s reaction of only having loyalty to himself is based entirely upon prior circumstances, generated by the scallywags and all the skullduggery that continues to bombard his shores.

TVLINE | That’s a very poetic way of putting it.
Oh, thanks. I wrote that down at the start of the season, and I’ve been waiting to use it. [Laughs] But I have to say, it really just gets better. Everything that’s been crafted up ’til now, with the suspicions and back-stabbings and unknowns, it really gets deeper and darker. There’s huge things that have happened with respect to the Mahoney family. That’s definitely something to lick your chops over.

With that, I toss it to you, HTGAWM fans. What did you think of Thursday’s episode — and how might Nate be involved with Wes’ murder? Drop a comment below with all of your thoughts.