As we’ve known it would since Eliza first showed up at Grey Sloan, push came to shove in Thursday’s Grey’s Anatomy. But, when Meredith refused to “get in line” and play nice with the hospital’s new residency director, it wasn’t Minnick who laid a metaphorical smackdown on her. Who did? Also, why isn’t Alex in prison? And what was with that drop-in from Maggie’s adoptive mom? Read on and find out.

‘ARE YOU IN HIDING?’ | As “None of Your Business” began, Alex revealed to Meredith and Maggie — and the show revealed to us, via flashback — that he wasn’t behind bars because (off a tip from Ben) Andrew had dropped the charges against his attacker. And when that hadn’t worked, DeLuca had threatened the D.A. that he’d tank the case by lying that he and Karev had had a fight. When Alex later visited Grey Sloan to get his job back (and did so), he asked his victim why he had abandoned his case. In response, Andrew said that Jo had been through enough and didn’t need to live her life afraid. So, if Alex — or, for that matter, we — ever had any doubt about whether Andrew had developed feelings for Wilson, he/we sure didn’t anymore. When at last Jo learned from Leah and Stephanie that her non-fiancé was a free man, she showed up on Mer and Maggie’s doorstep, she and Alex hugged, they gazed at one another, and then… she just walked away. Hmm…

‘WHY IS NO ONE MAKING ANY SENSE?’ | Since Maggie thought that her mother was in Hawaii, you couldn’t blame her for being shocked to learn from Jackson and Arizona that she was, in fact, sitting a few feet away talking to Nathan. Just as quickly as Mrs. Pierce could say, “Call me Diane,” she’d won over everyone, including Maggie’s birth father Richard, and, naturally, embarrassed her daughter to no end. But it turned out, Mom wasn’t at Grey Sloan for a visit, she was there for a plastic-surgery consult with Jackson — though not one of the nip/tuck variety. She was concerned about a suspicious rash, which, she ultimately learned, was inflammatory breast cancer, an especially serious kind that doesn’t present as lumps. Even after receiving her diagnosis and asking Jackson to help her break it to Maggie, Diane, smarting from her daughter’s scolding over their broken home, decided to return to Hawaii without disclosing her condition. (And we all know how Maggie feels about being misled… )

‘WINTER IS COMING’ | As Eliza continued to seek out every last nerve she had yet to work at Grey Sloan, Meredith finally drew a line in the sand and refused to allow Minnick in her O.R. Even when called on the carpet by Bailey, Grey stood her ground. “I do not support this — at all,” she declared. “You’re pushing Richard aside for no reason.” OK, fine, the chief replied. You’re suspended, effective immediately. (And, whether Bailey’s right or wrong, you have to give her some credit — it takes guts to suspend one of the owners of the hospital.) Later, Eliza pleaded with Miranda not to suspend anyone else. “It’ll slow down my progress,” she argued. Toward the end of the hour, she suggested to Arizona — correctly, I suspect — that she’d hate it if she got canned at Grey Sloan, because if she did, there would be nothing stopping Robbins from pursuing a relationship with her. (Annoying as Minnick may be as a colleague, she is pretty great as a flirt.) 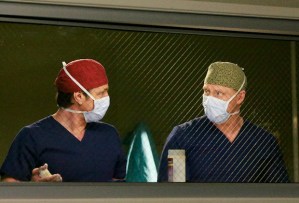 ‘KEEP YOUR MIND ON THESE SCANS AND NOT ON MY MARRIAGE’ | When not treating a patient wrapped in razor wire, poor, abandoned Owen, off a talk with Nathan, went looking for M.I.A. missus Amelia at Stephanie’s apartment. But, though he knocked along with opportunity, his wife wouldn’t open the door. (Oh, Amelia!) A visiting Catherine told Bailey that she was a dragon that could be unleashed on the Minnick/Webber situation as need be, and told April to M.Y.O.B. when she inquired whether Richard’s wife was at Grey Sloan to sort out the mess. At the episode’s close, Miranda called Kepner into her office and told her it was “tough decision time.” The upshot: April was stepping in for Meredith as the interim chief of general surgery! At home with Richard, Catherine tried to avoid admitting that she was on Bailey’s side — never mind the fact that Eliza’s hiring had been her idea in the first place!

So, what did you think of “None of Your Business”? Are you hoping Eliza will learn to play well with others and stick around (at least for Arizona’s sake)? Are you still rooting for Alex/Jo? Hit the comments.