“The battle’s begun,” Richard declared in Thursday’s Grey’s Anatomy. But, although he had on his side Maggie, Arizona, April and Jackson, Eliza wasn’t in the slightest concerned. “I know how to deal with a Dr. Webber,” she assured Bailey. So did Richard and his rebel alliance manage to make Minnick wish her first day at Grey Sloan was her last? And did we at last learn whether Alex really did take the plea bargain? Read on and find out…

‘HE’S GONNA DIE IN PRISON’ | As “Jukebox Hero” began, Mer, with Maggie’s help, did her damnedest to figure out where Alex was. When finally she came up with his arraignment number, the half sisters learned online that he’d been sentenced to 30 years behind bars! Luckily, Maggie had mistyped a digit. When they got the correct information, they discovered that his trial had been “indefinitely postponed,” which they took to mean that he had taken the plea. Shortly, Owen showed up, as you’d imagine he would, looking for Amelia. So basically, it was fact-finding missions all around!

Meanwhile, at Grey Sloan, during a clandestine meeting with his coconspirators, Richard said that the time was past for Jackson’s petition against Eliza. Since she intended to sway the attendings one by one in the O.R., Webber suggested that they never let her inside an O.R. It wasn’t a bad plan, really. However, Jackson had reservations. Noting that Bailey was the first African-American woman to be Grey Sloan’s chief, he was “not exactly excited to undermine her like this.” Thing is, Richard replied, this isn’t about Bailey, “this is about correcting a mistake that threatens our hospital.” So there.

‘YOUR PATIENT IS MY STUDENT’S CLASSROOM’ | Just before a taxi carrying a woman named Mindy who was “super-having a baby” was able to arrive at Grey Sloan, the vehicle was hit… by Mindy’s husband, Brian, resulting in the would-be newborn’s head being trapped by a broken pelvis! Mindy was going to need a C-section (and then some), Arizona and Maggie deduced. Since the mom-to-be pleaded, Robbins — feeling guilty about the position she’d told her via FaceTime to get in in the cab — agreed to let Brian be in the O.R. during the delivery. At the same time, the taxi driver told Ben he’d hoped to go home that night and tell his kids he’d been a hero that day.

As the day got underway, Eliza — so determined to be annoying that she announced, “I don’t do caffeine, I don’t need it!” — was chagrined to discover that she’d already missed Nathan’s valve replacement. Strike one. (And Riggs hadn’t even been in on Richard’s secret meeting.) Later, Arizona informed Eliza that she didn’t want her on Mindy’s case, even to champion Leah’s education, to which her flirt interest replied that she hadn’t been asking to be on it. “Stay the hell away from my O.R.,” Arizona finally said. Off that, Jackson refused to let Eliza strong-arm him into letting Ben step in in treating a young hockey player whose face had been… yeesh. Turned into the stuff of nightmares. 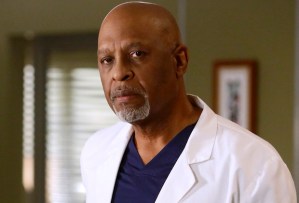 ‘YOU DIDN’T DO THIS, A CAR DID THIS’ | While Arizona tried to save Mindy, in distress after giving birth, Leah was left to treat the baby, who was also in trouble. Before Murphy could throw in the towel, Robbins stepped in. In spite of her best efforts, there was no guarantee that Mindy would ever wake up. The baby’s survival wasn’t a sure thing, either. (Sheesh!) Nearby, Eliza bulldozed her way into Richard and Ben’s surgery on the hockey player’s also-injured pal. Except “I would love to have you,” he insisted passive-aggressively. Afterwards, Minnick reported her difficulties to Bailey, who, in turn, insisted on calling a meeting. (Even Eliza seemed to realize exactly how well that would go!)

In the locker room, Ben told Jo he was sorry about Alex. But she wasn’t in any way, shape or form hearing it. “You didn’t put him in prison — I did,” she noted. Later, Ben reached out to her again, and she shut him right the hell down again. As the episode neared its conclusion, Arizona told Brian that the baby was gonna be OK. She also confessed that she’d put Mindy in the position that had caused so much damage, and they kinda-sorta seemed to agree to forgive themselves. At Bailey’s meeting, only Richard, who wasn’t invited, showed up. “This is mutiny,” she said. “It was a bad call,” he shot back. In the end, she revealed that “it’s not just me” behind this, hinting that Catherine, too, was Team Minnick.

‘I DON’T WANT TO LIE TO YOUR HUSBAND ANYMORE’ | After Owen learned from Stephanie that Amelia was taking a few days leave, Edwards hurried home and delivered scans to her temporary roommate, Mrs. Hunt (who’d had the nerve to eat the last yogurt!). Stephanie didn’t want to keep misleading her boss, but Amelia remained adamant — she didn’t want him to know where she was. “He will try to fix it,” she argued, “and It can’t be fixed.” (Ever the optimist, dear Amelia.) By and by, Owen figured out that Stephanie knew where his wife was and, upon being informed that she was safe and sober, sent Edwards back with the simplest and sweetest of messages: “Tell her to come home.”

Speaking of sweet, Ben made the cabbie a hero after all by telling him that he’d saved the hockey player in the bed next to him. He still made no inroads with Jo, though. When he tried one last time to reach out to her, she told him to stop. “Stuff like this happens, and I am built for it,” she snapped. At Stephanie’s place, she delivered Owen’s message to Amelia. Eliza thanked Arizona for letting Leah take the lead with the baby (which she’d hardly done because she was Team Minnick). At Arizona and Andrew’s, she admitted to her roommate that she missed Alex. “Why?” DeLuca asked. And, when Mer climbed into bed at the end of the day, we found out why: Alex was home! (Clearly, Andrew had dropped the charges, leaving Karev a free man.)

So, what did you think of “Jukebox Hero”? Was it, as ABC’s promos promised, “the episode you’ve been waiting for”? Hit the comments.