Need to catch up? Check out the previous Supernatural recap.

Those are the words of totally BAMF Dean during Supernatural‘s winter premiere. But before the hunter delivers that warning, the Winchesters find themselves locked up in separate cells.

The anti-terrorism specialist thinks isolating Dean and Sam from each other and the outside world will get them to talk eventually. My first thought: Dude, these guys have been to Hell. Silence doesn’t scare them. But later on, Dean says the six-week experience was worse than Hell.

While Sam passes the hours by exercising — hey, gotta stay in shape! — Dean marks the passage of time on the wall. Then one day, both Winchesters mysteriously drop dead… and then come back to life in the morgue. They make their escape, but the gun-toting agents are on their heels, and the brothers are in the middle of a giant forest with no resources. So they let the authorities catch up before laying out that aforementioned warning and setting actual physical traps. One by one, they take down each of the agents, but leave them alive. (Don’t worry, Mr. Ketch takes care of those loose ends.)

“Who are you?” the main agent asks.

“We’re the guys who save the world,” Sam replies. #micdrop 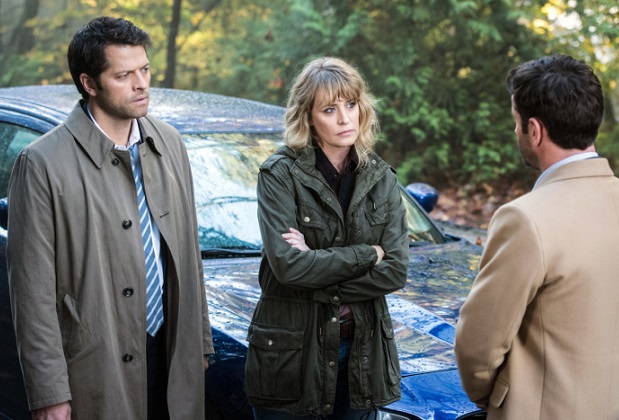 On the outside, Castiel and Mary have been working cases during the six-week period and searching for Dean and Sam to no avail — until the brothers call for help. Tracking their whereabouts isn’t easy, so Cas brings in the British Men of Letters, who tap into a thermal-imaging satellite to locate the hunters.

Once happily reunited with Cas and Mary, Dean and Sam reveal just how they got out, as well as the deadly cost: To escape imprisonment, they made a deal with Billie the reaper, who killed and resurrected them. Now, she gets to claim a Winchester’s life for good. So who will it be this time? Maybe a game of Rock, Paper, Scissors to decide? No need, because Mary volunteers herself. Just as she’s about to shoot herself, Cas kills Billie and launches into a moving speech: “This sad, doomed little world, it needs you. It needs every last Winchester it can get. I will not let you die. I won’t let any of you die. I won’t let you sacrifice yourselves. You mean too much to me, to everything. You made a stupid deal, and I broke it. You’re welcome.”

The episode’s cliffhanger is of a different nature. Having made inroads with the Winchesters, Mick gives Mary his “imagine a world where no one has to die because of the supernatural” pitch. Even though that would probably spell the end of the show, Mary responds, “I’m listening.”

Supernatural fans, what did you think of “First Blood,” which marks the show’s 250th episode?