Mr. Lucifer went to Washington during Thursday night’s Supernatural. OK, not quite, but he did take up residence in the body of the POTUS, who was hanging out at a presidential compound in the fall finale. (And some thought the resurrected Hitler episode was timely!)

The fallen angel quickly gets comfy in his new vessel, alerting the Secret Service that two cultists (aka Sam and Dean) plan to assassinate him because they think he literally is Satan. Another perk of the highest office in the land: the prez (played by One Life to Live‘s David Chisum) and his aide (True Blood‘s Courtney Ford) are engaged in a secret relationship, and Lucifer is more than happy to carry on that romp. Via angel radio, Castiel learns of a massive uptick in celestial energy, indicating that an angel’s offspring has been conceived in a human.

“I didn’t know [Lucifer] was dating,” Dean remarks, before declaring that they need to “impeach LOTUS and find Rosemary’s baby.” You know, just normal Supernatural problems. 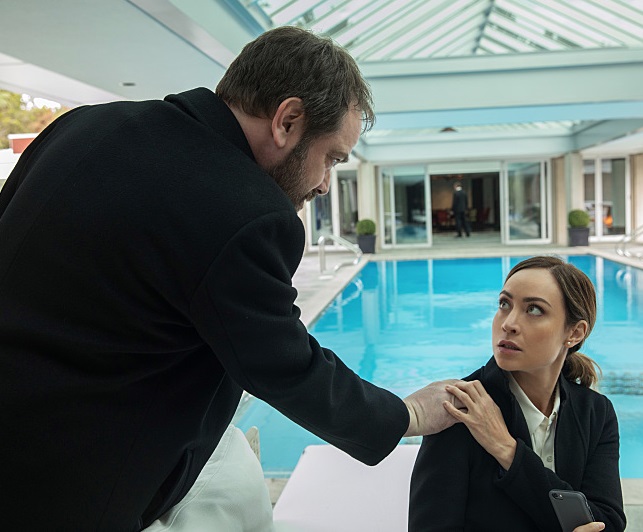 Crowley teleports the mom-to-be, who takes some convincing that she’s carrying Lucifer’s child but eventually agrees to help the Winchesters. Thanks to a gizmo obtained from the British Men of Letters and Rowena’s spellcasting, the boys are able to expel Lucifer and send him back to Hell, hooray! (Let’s be honest, Lucifer’s body-hopping quest for adulation dragged on a bit too long.) Now, it’s all about his spawn: Lucifer’s baby mama ditches Castiel at a café and then calls to inform him that she can’t get rid of the life growing inside of her.

Meanwhile, Dean and Sam’s victory is cut short when they’re arrested by the Secret Service. Raise your hand if you half-expected Mr. Ketch to, once again, show up and save the day. And while we’re talking British Men of Letters, why did it take this long for that storyline to resurface? Thank goodness Sam picks up the phone and calls Mick, leading Mr. Ketch to offer up the MOL’s expertise and weapons.

* Sam is annoyed that Crowley can just drop in any time now. When he asks that Crowley share his news without detailing his personal drama, the King of Hell replies, “Can I get you without the flannel? No.”

* Rowena’s fiancé breaks up with her, then is blown to smithereens by Crowley. “That is the sweetest thing you’ve ever done for me,” Rowena, covered in her ex’s blood, responds. I’m still debating if Crowley did it out of love, annoyance or both.

Supernatural fans, what did you think of the episode? Grade it via the poll below, then hit the comments to back up your pick!