Rebecca Bunch has finally done it: She’s landed the man of her dreams — her words, not ours — and accepted a marriage proposal from her longtime love Josh Chan. So… then why is she ballroom-dancing with her new boss Nathaniel while he sings about intercourse?

Like everything else on Crazy Ex-Girlfriend, it’s complicated. In this exclusive sneak peek at Friday’s all-new episode (The CW, 9/8c), Rebecca finds herself stuck in an elevator — holy rom-com! — with Nathaniel, who decides it’s time to do something about the simmering sexual tension between them. The result: “Let’s Have Intercourse,” a musical plea from Nathaniel for them to just do the deed already, asking if he can “see what your nipples look like” as he strums a guitar and twirls Rebecca around in an elaborate ballroom dance. 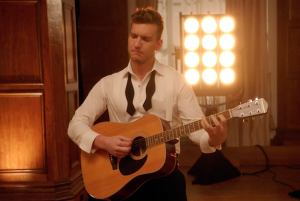 The culprit is the Santa Ana winds, which blow into West Covina this week and throw everybody off-balance. Rebecca and Nathaniel both have a sexy dream about one another, which he is “completely flummoxed by,” showrunner Aline Brosh McKenna tells TVLine. “It goes against everything he believes about his taste. This song is about him saying, ‘Look, we have this little bit of attraction. We should just get it over with and get it off the table.'”

Getting stuck in an elevator with a love interest is a romantic-comedy staple, but “Let’s Have Intercourse” proves that Nathaniel is “not playing the rom-com game,” Bloom says. “The song’s very much about, ‘We’re animals. Let’s just do it.’ Basically, he just wants to, like, rut on her for ten seconds.'” Co-star Scott Michael Foster (Nathaniel) agrees that the song is totally in character: “He’s very sort of, ‘This is what I want right now. Let’s do it, and then let’s move on.'”

“Let’s Have Intercourse” marks Foster’s Crazy Ex singing debut, but it wasn’t the vocals that intimidated him, he admits — it was the dancing. “They’re like, ‘We’re gonna do this thing where you guys are in a ballroom, and you’re doing a lot of lifts,'” he remembers. “And I was like, ‘F—k.’ It was intense.”

Press PLAY on the video above to watch “Let’s Have Intercourse,” then hit the comments to weigh in on the Rebecca-Josh-Nathaniel love triangle.