Fans of The CW’s Crazy Ex-Girlfriend were crushed when co-star Santino Fontana (Greg) left the show last week, four episodes into Season 2. (RIP, #TeamGreg.) But star/co-creator Rachel Bloom (Rebecca) says Greg’s exit — or should we call it “Gregxit”? — was planned all along.

“We always knew this is how it would go,” she tells TVLine. “And we wanted to completely demolish the love triangle. Other shows have love triangles where the other person leaves. But in the back of your head, you’re always rooting for Ross and Rachel. We wanted to do something else, to say, ‘No, this just ends.'” 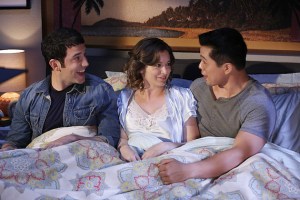 For the first season-plus of Crazy Ex-Girlfriend (Fridays, 9/8c), Greg had competed with his pal Josh Chan for Rebecca’s affections. But even Greg realized that his relationship with Rebecca was, as he sang last week, a total s—tshow. “This person has been repeatedly taken advantage of by Rebecca,” Bloom says. “And he ultimately can’t flourish as a person right now, as long as they are both in the same town. Because she will continue to try to seduce him.”

Showrunner Aline Brosh McKenna adds that letting the Rebecca-Josh-Greg love triangle drag on any longer wouldn’t fit with what we know about Greg’s character. “In real life, at some point, if you don’t learn that this is not a good idea, you become not a smart person,” she says. “The character would lose respect for himself. It didn’t make sense, since he’s such a smart guy, that he wouldn’t be learning from his lessons.”

So Greg is gone, and Josh is still keeping his distance from Rebecca. So what does that mean for the show going forward? Bloom hints that “we get to spend the next few episodes just focusing on the dynamics between the women, and Rebecca finding out who she is without men. A little Bechdel [Test] going on. And you see the other women grow by leaps and bounds.” McKenna says Rebecca’s friendship with Paula takes center stage: “I would say Rebecca and Paula’s love story becomes the preeminent love story in that section.” 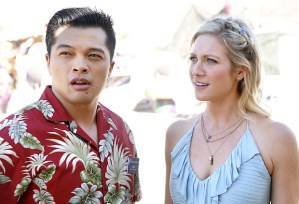 But all that girl power doesn’t mean Rebecca has given up on Josh. This week, in fact, “Brittany Snow will be coming on,” Bloom teases. The American Dreams alum “plays Josh’s new girlfriend, which causes big problems. It tests the Bechdel between Rebecca and Valencia,” she adds with a laugh. “They become kind of fixated on it.”

Plus, fans should know there’s another man about to enter Rebecca’s life. Scott Michael Foster (Greek) is joining the cast when the show returns from winter break in January, playing a lawyer who upends Rebecca’s professional life. And TVLine will have much more on him in the new year… so stay tuned.

Will you miss Greg? Are you ready for a new man in Rebecca’s life? Hit the comments, Crazy fans, and let us know where you stand.